Black knot, Apiosporina morbosa.
This disease is a serious problem on both plum and cherry. The conspicuous black elongated galls on the twigs and branches are the distinguishing symptoms of this disease. Spores from these galls are washed onto the new twig growth early in the season, causing new infections that may not be apparent until the following year. The disease is not harmful to the tree until the gall completely encircles the branch, with consequent girdling and death of the branch beyond the gall. Resistance to disease varies considerably among cultivars, with Formosa, Shiro, and Santa Rosa being moderately resistant and President being highly resistant.

When dealing with only a few infected trees, it is probably best to cut off the knots and remove them from the premises, making sure to cut several inches back of the knot to insure against leaving any infected tissue. Pruning should be accomplished before budbreak. Pruning and sanitation are essential for black knot control because fungicides will not be very effective in the face of a continuous supply of inoculum. When used in concert with the pruning practices just described, control can also be achieved with the use of fungicide sprays. Among the compounds registered for use in Connecticut are captan, thiophanate-methyl (used alone or in combination with captan), chlorothalonil, and sulfur. Consult the label for dosage rates and safety precautions. Adequate control can usually be achieved with a general purpose tree fruit spray containing captan. For more information, see the fact sheet on Disease Control for the Home Plum Orchard.

Brown rot, Monilinia fructicola.
This is the same disease as on peach and is the most common and destructive disease on plum in Connecticut. Blossom infection is less important on plum than on peach, otherwise the symptoms of the disease are very similar to those on peach.

As is the case of peach, sanitation is essential for controlling brown rot. Mummified fruit that remains on the tree should be removed and destroyed, and all dead and cankered twigs should be pruned and removed from the vicinity of the tree. See Peach for a more detailed discussion of this disease.

Leaf spot, anthracnose, Blumeriella jaapii (formerly Coccomyces hiemalis).
The disease occurs on plums but is usually not as serious as on cherry. See Cherry for a more detailed discussion of this disease.

Plum pockets, Taphrina communis.
Plum pockets are rare in Connecticut but because of the unique fruit deformation are very conspicuous when they do occur. The fungus causes the green fruit to become greatly enlarged into irregular hollow pouches.

Control measures are generally unnecessary since this disease is not very common.

Bacterial spot, Xanthomonas campestris pv. pruni.
This disease is caused by the same organism that attacks peach but the symptoms are somewhat different. On the leaves the infected areas soon fall out giving a pronounced shot-hole effect. On the fruit infection shows as purplish-black, sunken spots on the green fruit that are more conspicuous than on peach. See Peach for a more detailed discussion of this disease.

Aphids.
Several species of aphids can reduce the vigor of plum trees. Some of these are the apple aphid, Aphis pomi, the green peach aphid, Myzus persicae, the mealy plum aphid, Hyalopterus pruni; and the rusty plum aphid, Hysteroneura setariae. Outbreaks of these aphids on plum can be controlled by spraying thoroughly with diazinon, malathion, or insecticidal soap, which are among the compounds registered for use against this pest in Connecticut. For ornamental plum, imidacloprid may be used as a systemic to be taken up by the roots. Consult the labels for dosage rates and safety precautions. Usually, natural enemies, such as lacewings, ladybird beetles, and syrphid flies, keep aphid populations below injury levels.

Apple maggot, Rhagoletis pomonella.
This pest occasionally attacks plums. Chemical control usually is not needed. The apple maggot is one of the three most destructive apple insects in New England. Larvae or "railroad worms" tunnel through developing apples, often destroying them. Flies spend the winter as pupae within seed-like puparia in the soil. The adults typically emerge between late June and August. They are about the size of a housefly and have black-and-white striped abdomens and black bars on their wings. About 7-10 days after emergence, females begin to lay eggs in fruit. Egg-laying usually reaches a peak early in late July or early August, but it may continue until the apples are harvested. After hatching, the small legless maggots tunnel through the flesh of the apple. Upon completing development, the larvae leave the fruit to form their puparia in the soil beneath trees. The presence of adults can be detected with baited yellow sticky traps and with red sticky balls hung in the trees. The sticky traps are especially useful for detecting flies that migrate into orchards to start new infestations. Repeated applications of carbaryl and phosmet, which are among the compounds registered for use against this pest in Connecticut, control adults. Rotenone, a botanical insecticide, combined with a synergist is an alternative, but less effective, spray to control adult flies. Red sphere traps, either sticky or treated with a registered insecticide, can also control apple maggots. Consult the labels for dosage rates and safety precautions.

European fruit lecanium, Parthenolecanium corni.
A dormant spray of horticultural oil provides control. These convex scales are considerably larger than San Jose or Forbes scales. They are rare in Connecticut and control usually is not required.

European red mite, Panonychus ulmi.
This mite often is damaging to plums. Large infestations of these mites may cause bronzing of foliage and premature leaf drop. Plums on bronzed trees may be small. The mites spend the winter as red eggs on the bark of trees. Nymphs hatch from eggs about the time the shoots reach the tight cluster growth stage and develop rapidly. Mites have several generations each summer, with the peak abundance in July or early August. Mite eggs are best seen with a magnifier because they are extremely small. They are slightly flattened and have a delicate central hair. The adult females are dark red with white spots. Other stages vary from red to green in color. Unlike the overwintering eggs, the summer ones are brown. One or more applications of horticultural oil, which is among the compounds registered for use against this pest in Connecticut, before bloom provides control by suffocating the eggs that have overwintered. To minimize the chances of foliar damage from oil, the application rates are reduced as the growing season progresses. Consult the label for dosage rates and additional safety precautions.

Peachtree borer, Synanthedon exitiosa.
The peach borer sometimes infests plum trees. This major pest damages the cambium of plum trees, sometimes girdling and killing young trees. The caterpillars of this moth overwinter on or under the bark of trees just below ground level. In spring, they resume feeding when the temperature reaches about 50 F. The caterpillars, which are white or creamy with a yellowish brown to dark brown head, tunnel in the cambium layer just beneath the bark on the trunks. Masses of semi-transparent gum often exude from the wound. In mid-May and June, mature larvae make a cocoon of silken threads and bits of frass and wood, and then they form a pupa in the cocoon. The empty pupal cases often protrude from the gum exudate after the emergence of the adult moths. The wasp-like moths emerge between June and August. The moths are dark steel-blue with a few white markings on the body and dark markings on the otherwise transparent wings. Often on the same day of emergence, females mate and lay eggs. The eggs hatch within two weeks, and the caterpillars bore into the cambium. Flights of the adult moths may be monitored with pheromone traps. Trunk sprays of methoxychlor, which is among the compounds registered for use against this pest in Connecticut, applied in early to mid-July and again in early to mid-August may control the peachtree borers. Consult the label for dosage rates and safety precautions. 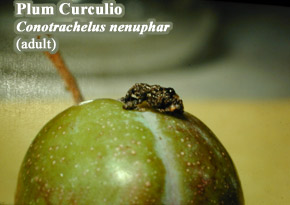 Plum curculio, Conotrachelus nenuphar.
These snout beetles potentially are very destructive pests of plum fruit. Adults spend the winter in debris in forests or sometimes in orchards. The dark brown adults are mottled with gray and about 1/4" long. They have a pair of distinctive humps on each wing cover. They become active about the time that the trees blossom. Adults feed to some extent upon flowers and later upon the fruit as it reaches a diameter of 1/4". Females cut crescent-shaped marks in the fruit before laying an egg. After hatching, the grub-like larvae burrow into the pulp of the fruit, causing it to drop from the tree. The mature larvae enter the ground to form pupae. After about a month, the adult beetles emerge. They feed briefly before seeking overwintering sites. Adults may be controlled with phosmet, which is among the compounds registered for use against this pest in Connecticut, applied 2-3 times, 7-10 days apart, at or shortly after petal fall. Consult the label for dosage rates, safety precautions and preharvest intervals.

San Jose scale, Quadraspidiotus perniciosus.
San Jose scales sometimes infest plum, especially Japanese plum. Large infestations of the San Jose scale can cause branch and even tree death as well as red spots on fruit. Partially-grown scales overwinter under their circular gray covering or scale on the twigs and the branches of trees. They begin to feed as the sap starts to flow. When plum trees bloom, the males emerge from under their scales to mate with the immobile females. Females are circular and cone-shaped, and their circular scales are about 1/16" in diameter, with a raised center or nipple. The males are smaller and elongate, with the nipple not centered on the scale. Females give live birth to tiny bright yellow crawlers in June, usually about 3-5 weeks after the flower petals drop. The young crawlers quickly settle, insert their long mouthparts into the twigs, and then suck sap from branches. As they grow, the crawlers secrete a waxy filament that becomes their scale or covering. Overlapping generations are present from June through September. Scales may be controlled by applying horticultural oil when apples are at the half-inch green growth stage. Phosmet, which is among the compounds registered for control of this pest in Connecticut, applied against the crawlers after bloom will give good control. Consult the labels for dosage rates and safety precautions. To detect the yellow crawlers, wrap black tape coated with Vaseline around small branches. Adult flights may be detected with pheromone traps.

Shothole borer, Scolytus rugulosus.
Larvae of this bark beetle sometimes bore into plum and other fruit trees. Generally, the beetles attack injured or weakened trees, further reducing their vigor. In spring, adults emerge from the bark through small circular holes similar to shot holes. The little dark brown beetle is about 1/10" long. Females burrow directly into bark and sapwood to construct an egg chamber. They lay white eggs as they burrow further along the branch. After hatching, the white grubs or larvae expand the burrows further as they feed. Larval galleries may girdle a branch. Shothole borers probably have at least two generations annually because the life cycle can be completed in 4-6 weeks. The best way to prevent infestations of shot-hole borers is to keep the trees vigorous especially through deep irrigation during droughts. Trunk sprays of methoxychlor, which is among the compounds registered for control of this pest in Connecticut, may lessen infestations. Consult the label for dosage rates and safety precautions.