Botrytis leaf, stem, and corm rot, Botrytis spp.
Symptoms of this disease can appear on leaves, flowers, stems, and corms. Flowers turn a papery brown and become covered with gray, fuzzy masses. Senescing flowers are particularly susceptible. Tan to brown spots with a target-like appearance can also develop on the leaves. These patches are often associated with flowers which have dropped onto the leaf surface. This disease is particularly troublesome during periods of extended cloudy, humid, wet weather. A stem rot can also develop if cool, wet conditions persist. The rot works its way downward and is accompanied by the production of a black or purplish-black fuzzy resting structure called a sclerotium. Infected corms may have sunken, yellowish lesions with darker margins which are often hidden by the leaf bases. Corms can also exhibit a punky, tan decay which works into the corm and is often associated with dark spore masses and sclerotia. The fungus may rot the core but leave the rest of the corm unaffected or it may turn the corm into a dry, spongy mass.

Good sanitation practices, including grooming the plants and removing spent or senescing flowers, can minimize the potential for infection. These affected tissues should be carefully removed and discarded when they are dry. It is also important to avoid wetting the flowers when watering, and crowding plants. Adequate spacing between the plants can promote good air circulation. Any corms with symptoms of infection should be rogued and destroyed. It is also important to dig the corms during dry weather and to cure them properly. Botrytis rot will progress at lower temperatures than other storage rots and is particularly likely to affect improperly cured corms. Artificial heat for curing is advisable if the presence of Botrytis is suspected. Control can also be achieved with the use of fungicide sprays during the growing season. These can be applied as soon as symptoms are visible. Among the compounds registered for use in Connecticut are chlorothalonil, mancozeb, and thiophanate-methyl. Consult the label for dosage rates and safety precautions.

Wilt, yellows, Fusarium oxysporum f. sp. gladioli.
Symptoms show as paling and yellowing of leaves which progresses until the entire plant is dead. Plants may wilt in the middle of the day and seem to recover at night. Some plants may show no signs of infection until they come into flower, when they suddenly collapse. Dead leaves may fall over or remain upright. Empty spaces in the row at digging time are usually due to this fungus. Corm infection shows as a brown rot at the basal plate extending upward, and if the corm is cut across, brown lines or streaks radiate from the core to the nodes.

Control of this disease is difficult since the pathogen is commonly found in soil. One of the key strategies for control of vascular wilts is prevention. Therefore, it is important to avoid planting corms in infested soil. It is also helpful to maximize plant vigor by good cultural care and watering. Careful handling of plants will avoid root injury which enables the fungus to enter the plant. Since repeated use of the same area greatly increases the amount of disease, rotation is essential. When available, it is also helpful to use resistant varieties. It is also helpful to rogue and remove infected corms. Husks on infected corms are darker in color and dull in contrast to the sheen of healthy corms. Chemical controls are not effective for these fungi.

Storage rots, Penicillium spp.
Corms may become soft during storage or appear to be covered with bluish-green masses of fungal growth.

Control involves careful selection of clean, well-ripened corms for storage during digging. These corms should be cured for three weeks at 80 F, with artificial heat if necessary. It is also helpful to carefully inspect the corms after storage and to destroy any corms that don't appear healthy.

Scab, Pseudomonas.
The first symptom of infection is the appearance of tiny, reddish-brown, raised dots on the basal part of the leaves. These spots enlarge and coalesce to form longitudinal lesions or streaks. Under favorable weather conditions, large, brown, dried areas develop on the leaves. These are followed by a rot of the stem at or just below ground level. Lesions on the corms are light-colored, watery spots at first and become darkened with a raised margin, the center of which shows a hard, gummy exudate which is shiny and reddish.

The most effective method for control of this disease is selection of a site with well-drained soil. It is also very important to discard any corms that show disease symptoms.

Bacterial blight, Xanthomonas.
This disease is usually only a problem during years with excessive rainfall. Infestation can result in significant damage to the foliage, particularly in closely planted stock. Spots first appear as small, elongated, water-soaked marks in the form of irregular, angular lesions between the veins. As they age, they become brown to black and develop a yellow margin.

The most effective method for control of this disease is selection of a site with well-drained soil. It is also very important to discard any corms that show disease symptoms.

Mosaic, virus, Cucumber Mosaic Virus (CMV).
Symptoms appear as a light and dark green mottling or a mosaic pattern on the leaves.

Control involves roguing and removing infected plants as soon as they are detected.

This disease is not serious and can be minimized by watering early in the day or by avoiding overhead irrigation.

Cutworms.
Various species of cutworms occasionally injure gladiolus. Perhaps 14 or 15 species of moths, the larvae of which are called cutworms, can be damaging. All belong to the family Noctuidae, and all are dark-colored moths. In most cases, the larvae feed at night and remain just below the soil surface during the day. Most of these cutworms reach a length of 1 to 2". They are smooth, robust, naked caterpillars, dull gray, greenish or brownish, indistinctly marked with spots and longitudinal stripes. Some have one generation each year and others have two or more, but most of those that are troublesome are probably of the single generation type that hibernate as partly grown larvae. Most of these commonly feed on grasses and weeds, but will feed upon a variety of plants when cultivation or other causes destroy their regular food supply. A few species are able to travel across large plowed fields to find food. See Cutworm fact sheet. 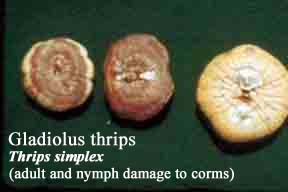 Gladiolus thrips, Thrips simplex.
A few species of thrips severely injure gladiolus, with the gladiolus thrips being the worst offender. The 1/16", elongate, black adults and smaller, yellowish nymphs cause injury by rupturing tender epidermal leaf, flower and corm tissue and sucking the plant juices that ooze out. The flower buds may be injured so that no good blossoms result. Females lay eggs in slits made in leaf surfaces. The nymphs take from 2 to 4 weeks to mature, allowing for many generations in one year. They overwinter in the corms.
The life cycle can be broken by storing the corms at 40 - 45º F or soaking them for three hours in 1.25 tablespoons of disinfectant in a gallon of water just prior to planting. The minute insects hide in the sheaths of the flower stem where it is difficult to reach them with a spray. Among the compounds registered for use against this pest in Connecticut are methoxychlor, spinosad, or carbaryl, which can control this pest when applied early in the growing season, prior to flower formation. Consult the labels for dosage rates and safety precautions. Burning the old stalks and trash on the field, if allowed, may help in control of this insect.

Plant bugs.
The fourlined plant bug, Poecilocapsus lineatus, and tarnished plant bug, Lygus lineolaris, lay eggs in soft stems. They hatch about the middle of May and the young bugs suck the sap from the tender leaves of gladiolus and many other plants. They molt five times and when mature, about the middle of June, they have wings and are nearly 1/3" long. The fourlined plant bug is yellow bodied, marked lengthwise on the wings with four black stripes alternating with three green stripes. The injury to the leaves consists of sunken areas around the punctures. These areas later appear as circular transparent spots and finally as circular holes. The tarnished plant bug is mottled brownish, 1/5" long, with a yellow "Y" shape pattern on its back. There is one generation each year of the fourlined plant bug and two to five generations yearly of the tarnished plant bug. The nymphs can be managed by spraying with azadirachtin, ultrafine horticultural oil, insecticidal soap or malathion, which are among the compounds registered for control of this pest in Connecticut. Consult the labels for dosage rates and safety precautions.

Tulip aphids, Anuraphis tulipae.
This aphid sometimes overwinters on the stored corms, and causes great injury, especially on the new growth. Immersing the infested bulbs or roots in 110º F water for 30 minutes will destroy the insects. Among the compounds registered for control of this pest in Connecticut are methoxychlor and malathion. Infested bulbs may be dusted with methoxychlor or dipped in a malathion solution for effective control. Exposure to the treatment should last for several hours before the bulbs are planted or returned to storage. Imidacloprid, applied as a soil drench, will provide season-long systemic control. Consult the label for dosage rates and safety precautions.

Twospotted spider mite, Tetranychus urticae.
This pest infests the leaves, which become light yellow in color, and the plants have a generally unhealthy appearance. Sometimes the mites form webs, which more or less enclose the leaves. Among the compounds registered for control of this pest in Connecticut are insecticidal soap and ultrafine horticultural oil. Spraying with insecticidal soap will give sufficient control if applied at least twice at 7-10 day intervals. The predatory mite, Neoseiulus fallacis, is most commonly found feeding where there are mite infestations. A single application of ultrafine horticultural oil (1/2 - 1% dilution) can be effective if predatory mites are present. Special care should be taken with soap or oil to obtain thorough spray coverage, because they only work on contact. Abamectin is an effective restricted use product. Consult the labels for dosage rates and safety precautions. Avoid applying carbaryl or pyrethroids, which tend to be much more toxic to the predators than to the pest spider mites.

Zebra caterpillar, Melanchra picta.
This caterpillar feeds on many different plants in the garden, including gladiolus. This black caterpillar with bright yellow markings is a general feeder, being found on nearly all kinds of vegetables as well as many flowering plants. It is about 2" long when full grown. The moth is reddish brown and without prominent markings. The rear wings are nearly white with brown margins. There are two generations each year. Like the cross-striped caterpillar, this insect is not common, but large numbers of caterpillars may be found on a single plant.