Epidemics of Boxwood Blight in 2018

Severe epidemics of boxwood blight have been reported landscapes and nurseries since early August. Introduction of infected boxwood plants and warm and humid summer weather conditions contributed to the epidemics. To prevent the disease, It is suggested to detect the disease early, remove and destroy infected plants, and apply fungicides preventatively.

For disease diagnoses, please send samples to PDIO by following the linked instruction of sample submission.

Boxwood Blight in the News

Two new articles have been released on the spread of Boxwood Blight throughout the United States following the detection of the disease in Illinois. These articles are available at the links below:

Boxwood Blight: Researchers Looking Outside the Box for Solutions

A color identification guide (11" x 17") is now available as a downloadable PDF file suitable for printing.  This guide includes high resolution color photos of boxwood blight symptoms in the landscape and nursery to help with identification of this important and potentially devastating disease.  [Funding for this guide was provided from the FY2013 Farm Bill, USDA-APHIS.] 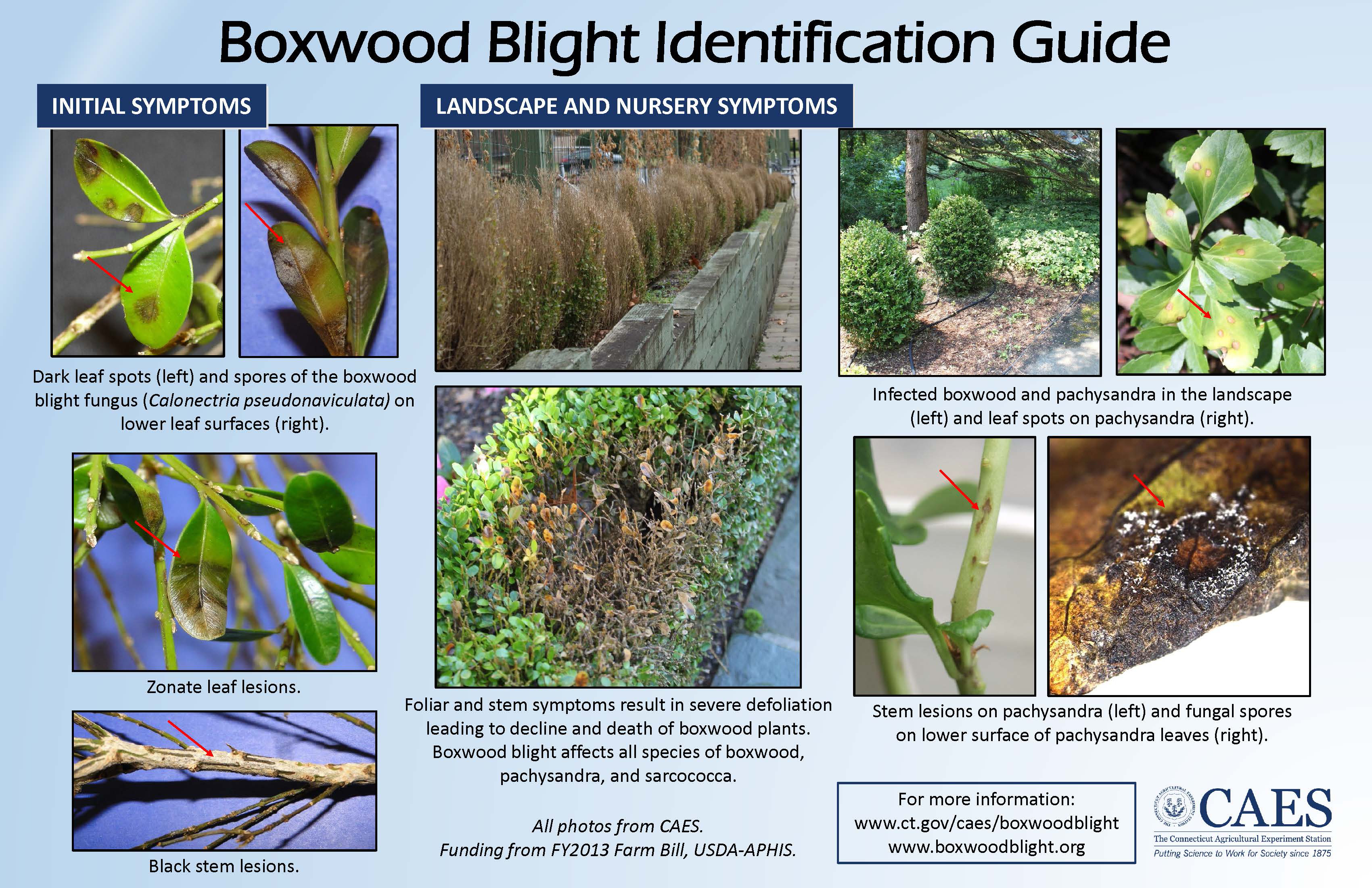 Recently revised with updated information on efficacious sanitizers and cleaners, these documents address remediation and management of boxwood blight in a variety of different locations or situations.  They also provide guidelines for installing new plantings of boxwood for different scenarios, especially when boxwood blight is found or suspected on boxwood, pachysandra, or both hosts on a property.

The Connecticut Agricultural Experiment Station (CAES) has full statutory authority for plant diseases, as stated in Sec. 22-84 and Sec 22-98 of the Connecticut General Statutes. Therefore, in Connecticut, regulatory actions for boxwood blight, caused by the fungus Calonectria pseudonaviculata (syn. Cylindrocladium pseudonaviculatum) are under the statutory authority of CAES.  Official diagnosis must be confirmed by CAES plant pathologists. Samples from any symptomatic/suspicious boxwood and/or pachysandra plants should be sent to The Connecticut Agricultural Experiment Station's Plant Disease Information Office (www.ct.gov/caes/pdio) for testing and confirmation.

As with other Guidelines and BMPs previously released by CAES, these are working documents that evolve as we learn new information about this disease (please note the version numbers reflect updates).  We encourage comments and suggestions.  The newly revised documents by Dr. Sharon M. Douglas are:

Information on Sanitizers for Boxwood Blight

Update on Boxwood Blight in Connecticut

Boxwood Blight Confirmed on Pachysandra in a Connecticut Landscape

A natural infection of pachysandra in the landscape by Cylindrocladium pseudonaviculatum, the boxwood blight fungus, was confirmed by CAES plant pathologists on 29 June 2012. The pachysandra sample had been collected by a CAES inspector while visiting a residential property in Fairfield County that had installed B&B boxwood plants in May 2012.  These plants had been confirmed by CAES to be infected with boxwood blight one week prior to the visit. The inspector noticed that an established bed of pachysandra bed adjacent to the infected boxwood had unusual, foliar symptoms, so he collected the sample to bring to the diagnostic lab for examination.  This new report follows the previous report of pachysandra as an experimental host of boxwood blight by CAES (Plant Disease 2012, Vol. 96:1069). 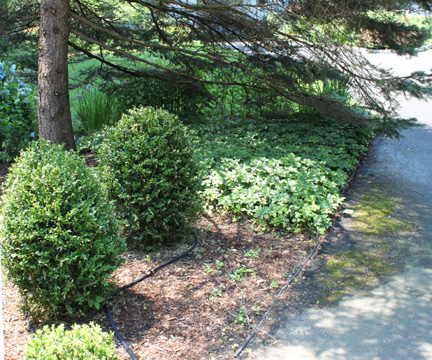 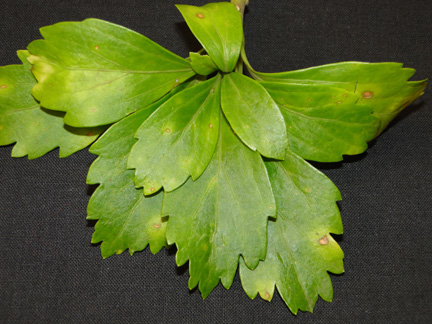 A report by Dr. Sharon M. Douglas titled Boxwood Blight Confirmed on Pachysandra in a Connecticut Landscape (PDF*) is available.

Follow this link to a BOXWOOD BLIGHT OF PACHYSANDRA IMAGE GALLERY.

Plant pathologists at The Connecticut Agricutural Experiment Station recently identified Pachysandra terminalis (common names: pachysandra, Japanese spurge) as a new host of Cylindrocladium pseudonaviculatum, the fungus that causes Boxwood Blight. Healthy pachysandra plants were inoculated with spores of C. pseudonaviculatum and lesions developed on the leaves ten days after inoculation.  Three weeks after inoculation, many of the leaves with lesions yellowed and dropped. Heavy sporulation of the fungus was observed.  This raises significant concerns about pachysandra as a potential source of inoculum for infection of boxwood and vice versa.  More information will be forthcoming. 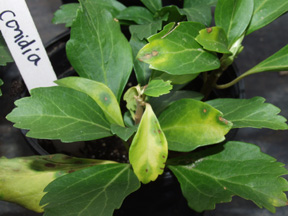 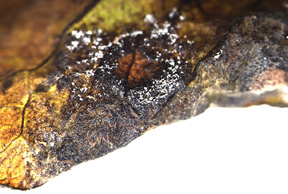 Disease New to Connecticut and the U.S.

In October 2011, a disease of boxwood new to Connecticut and the United States was identified by The Plant Disease Information Office. Samples of boxwood with unusual symptoms were submitted for diagnosis and after extensive microscopic examination and a search of the literature, the disease was tentatively identified as boxwood blight, caused by the fungus Cylindrocladium pseudonaviculatum. This identification was subsequently confirmed by national mycologists at the United States Department of Agriculture-Animal Plant Health Inspection Service-Plant Protection and Quarantine (USDA-APHIS-PPQ) in Beltsville, MD. To date, boxwood blight has also been found in North Carolina, Virginia, Maryland, Rhode Island, Massachusetts, Oregon, New York, Pennsylvania, and Ohio.   It has also been found in two provinces in Canada (BC and ON).  It not known how the pathogen was introduced into the U.S.

A new fact sheet by Dr. Sharon M. Douglas has color photos to help identify this new disease and also discusses strategies about how to minimize its impact. The fact sheet is titled Boxwood Blight--A New Disease for Connecticut and the U. S. (REVISED July 2012, PDF format*).

If you are concerned that your boxwood plants might have boxwood blight, information about how to send or bring samples to the Experiment Station for diagnosis can be found at: https://www.ct.gov/caes/pdio.