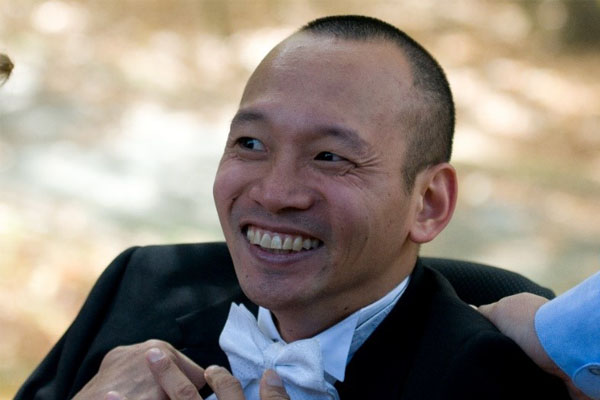 Submitted by Kellie Hartigan, DDS Self Advocate Coordinator
This is a story about my husband Sung-Bin Hartigan.  He was born in South Korea on February 12, 1976.  Bin was born with cerebral palsy.  People in Korea had no understanding of disabilities, so their ideas were negative and degrading.  Bin’s sister did not have a disability and could see that he was not safe in his mother’s care.  She literally carried him on her back to an orphanage.  Although his physical needs required a wheel chair, he did not have one.  After several years in the orphanage Bin and his sister were adopted by the Hartigans.  They were transported to New York first and then to Mansfield, CT where they resided with their new family.  This is where Bin’s journey in the US began.
Bin faced many challenges when he came to the US.  There was no official record of his birth; however, his estimated age upon arrival in the US was between 5 and 7 years of age.  Bin spoke only Korean (also referred to as Hangul).  Bin was enrolled in a public nonprofit education center called Eastconn where he had occupational and physical therapy every day.  Both therapies improved his speech helping him to become more independent.  He was provided with a manual wheelchair and had the opportunity to begin learning how to speak English.  He then attended Windham High School.  He always did what he could to be successful; however, English is his second language, so academics were challenging for Bin. He graduated in 1997.
As Bin approached adulthood, he was driven to have a good life.  Due to his physical limitations, finding satisfying work was challenging. His first work experience was at the Windham Hospital. Bin volunteered by answering the phone.  He then got a job at Eastern Connecticut State University first as a cashier.  He presently works as a janitor in the Student Union.  In the future Bin would like to work in an office. When I asked Bin what his aspirations are, Bin responded by saying, “I would love to create a camp for individuals in the disabled community that helps them to build their confidence, enabling them to live and work in their community successfully.  I would name the camp, Camp Hartigan”.  Bin is very close to his sister and considers her his best advocate. We both enjoy traveling to Georgia to visit her.
I too have cerebral palsy, so we have a good understanding of each other and have been happily married for ten years. We recently bought a house together. One of the challenges we faced was finding a house that didn’t need major renovations to accommodate our physical needs. After lots of searching we were grateful to find one that had a ramp, and many of the features needed to move in.  Like everyone else who owns a house, we are always changing and fixing things that need to be done.  With the support of our staff, we are able to live comfortably together in our own home. With that said, we feel very successful! 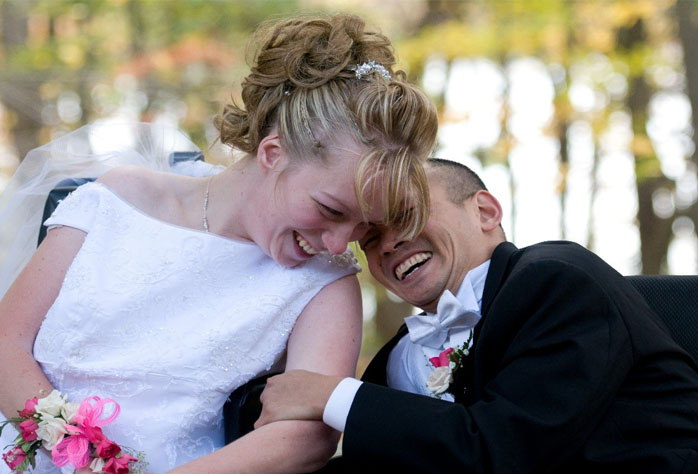