Reclassification of Southwest Connecticut to Severe Nonattainment for Ozone

On April 13, 2022, EPA proposed to determine that three counties in Connecticut currently designated “serious” nonattainment for the 2008 National Ambient Air Quality Standards (NAAQS or standards) for ozone failed to meet attainment of the NAAQS by the attainment date of July 20, 2021. The  proposal, “Proposed Determinations of Attainment by the Attainment Date, Extension of the Attainment Date, and Reclassification of Areas Classified as Serious for the 2008 Ozone National Ambient Air Quality Standards”, therefore includes a reclassification to the higher level “severe” status which is accompanied by more stringent control measure requirements.

Connecticut’s five remaining counties have been determined to attain the 2008 standard.  Nevertheless, the entire state remains nonattainment for the more stringent 2015 standard which is not addressed by this proposal.

The 1990 Clean Air Act Amendments classified the air quality control region in southwest Connecticut, consisting of the towns of New Milford and Bridgewater plus Fairfield County, excluding Shelton, as “severe” nonattainment for the ozone standard in place at the time.  While that area, and all of Connecticut, has attained the 1-hour ozone standard, regulatory requirements consistent with that “severe” designation have remained in place as control measures for subsequent standards.  With finalization of this proposal and corresponding regulatory changes by the Department, the “severe” area requirements within the federal Clean Air Act will extend to the owners or operators of certain air pollution sources within of the forty-three (43) affected towns of Fairfield, New Haven and Middlesex counties.  Regulatory requirements already associated with New Milford and Bridgewater will remain in effect.

The proposal is expected to become final sometime later this year.  Written comments to EPA must be received on or before June 13, 2022.

The following figure is a map of the original severe 1-hour ozone non-attainment towns on the left and a map of the new proposed severe area counties on the right: 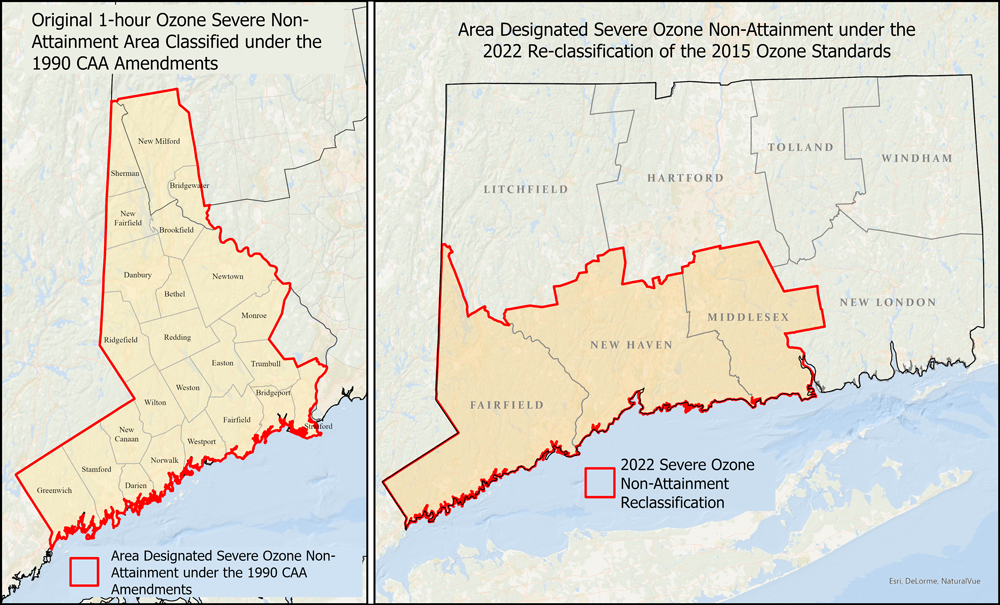 While there are additional administrative requirements that coincide with the “severe” designation, the most significant requirements affecting the regulated community are as follows:

Title V and New Source Review Permits:  Immediately upon reclassification permit requirements for severe areas will extend to all areas previously and currently designated “severe” and will include lower major source thresholds of 25 tons per year and offset ratios of 1.3 to 1.   For more information on how permit status is affected refer to the permitting FAQs.

For more information, follow this link to the EPA presentation from the April 2022 SIPRAC meeting.

Updates to the reclassification process will be posted to this page as they become available.