(Hartford, CT) – Stephanie Thomas was sworn in today as the 75th Secretary of the State of Connecticut, pledging to upgrade the state’s election infrastructure, help the business community succeed, and foster statewide civic engagement.

“I am honored the citizens of Connecticut put their trust in me to lead this important office at this time,” Thomas said. “From administering free and fair elections to assisting our business community, I pledge to do so with the utmost integrity, focusing on open communication, ease of access, and creating a seamless relationship between the people of Connecticut and their state government.”

Thomas was sworn in along with Governor Ned Lamont and other officials during a midday ceremony at the William A. O’Neill State Armory. She was administered the oath of office by Norwalk Town Clerk Richard “Rick” McQuaid, a Republican cross-endorsed by the Democratic Party.

Prior to her election as Secretary, Thomas served as State Representative for the 143rd district, which included Norwalk, Wilton, and Westport. She led the Government Administration and Elections Committee as vice-chair and helped pass numerous pieces of legislation to expand voters’ ballot access, including automatic voter registration at state agencies as well as resolutions to advance early voting and universal access to absentee ballot voting.

Thomas spent her career as a small business owner, working as a strategy and fundraising consultant for nonprofit organizations. Prior to this work, she received a bachelor’s degree from New York University and a master’s degree in nonprofit management from New School University.

“There is much work to do to achieve my vision for the agency,” Thomas said. “I look forward to using my experience as a former state legislator and small business owner to tackle any challenges we may face.” Following her swearing-in, Thomas administered the oath of office to Deputy Secretary of the State Jacqueline Kozin during an agency-wide ceremony at the State Office Building. 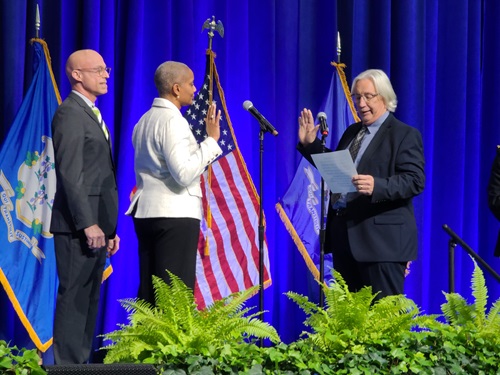