HARTFORD – Connecticut Secretary of the State Denise Merrill announced today that Connecticut’s Commemorative Suffragist “I Voted” Stickers were named a 2020 Clearinghouse Award winner by the U.S. Election Assistance Commission for their depiction of Connecticut women who fought for women’s suffrage and voting rights. The project was initiated by Pamela Hovland, a Wilton resident, graphic designer, faculty member at Yale University and a long-time visual activist who spent months researching and writing about the suffrage movement.

“Voters across Connecticut absolutely loved these stickers! We started this project to commemorate the 100 year anniversary of the ratification of the 19th Amendment, which ultimately gave women the right to vote,” said Secretary Merrill. “Even though the COVID-19 pandemic derailed some of our plans to mark this centennial, these special women’s suffrage “I Voted” stickers were able to put a smile on voters’ faces across the state.”

“I hope this project inspires others to research — and make visual — the many diverse and often unknown stories of the brave women who fought for suffrage,” said Pamela Hovland, “Their sustained and compelling activism has certainly inspired me.”

Connecticut’s Commemorative Suffragist “I Voted” Stickers are attached and can be found here: https://portal.ct.gov/SOTS/Education/Suffrage-Centennial/Digital-I-Voted-Stickers

“This year we are pleased to receive a record-breaking number of 137 Clearie submissions, more than tripling the 2019 submissions,” said EAC Chairman Donald Palmer. “The number of Clearie submissions highlights that even though this was a challenging election year, officials continue to modernize and develop programming that will serve as helpful best practices for the coming years. The job of an election official is never done, and we hope to see even more submissions and exceptional examples in 2021. The Clearie winners, those who submitted entries, and all election officials should be incredibly proud of the work they did to ensure a successful 2020 election. These best practices are valuable resources as officials continue to administer elections during the pandemic and for years to come.”

EAC Commissioner and 2020 Chairman, Ben Hovland said, “During an incredibly challenging year, election officials rose to the occasion by developing new, innovative solutions to serve voters. As a result of their creativity and perseverance, millions of voters had their voices heard in extremely well-run elections with record turnout.”

The U.S. Election Assistance Commission (EAC) announced the recipients of the 2020 Clearinghouse Awards, also known as the “Clearie” Awards, for best practices in election administration. Established by the Help America Vote Act of 2002 (HAVA), the EAC is charged with serving as a clearinghouse for election administration information. To further this mission, the EAC launched the Clearies in 2016 to promote best practices in elections and celebrate the accomplishments of election officials. Now in its fifth year, the Clearie awards recognize the innovative efforts of election officials across America. Entries were judged based on each initiative’s depiction of positive results, innovation, sustainability, outreach efforts, cost-effectiveness, and replicability. More information about each awardee is available on the EAC’s website.

Connecticut’s Commemorative Suffragist “I Voted” Stickers are attached and can be found here: https://portal.ct.gov/SOTS/Education/Suffrage-Centennial/Digital-I-Voted-Stickers or click on an image below to read, download or print. 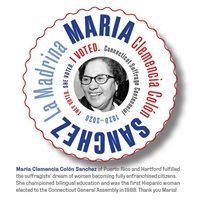 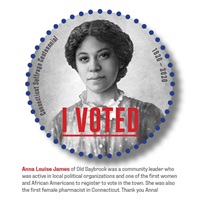 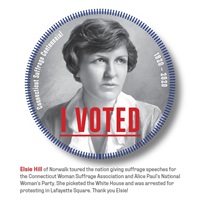 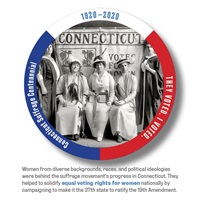 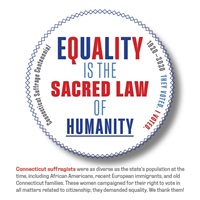 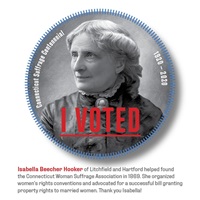 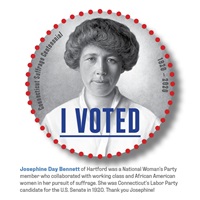 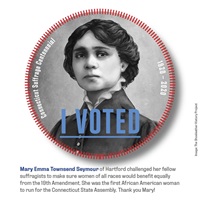 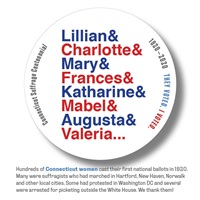