HARTFORD – Connecticut Secretary of the State Denise Merrill yesterday awarded Guilford’s Carol Rizzolo with a NASS Medallion Award for her advocacy and leadership on behalf of critical election reforms over the past two years. The Medallion Awards were created to recognize those who have demonstrated outstanding service and dedication to furthering the mission of the National Association of Secretaries of State (NASS) with respect to elections, voter and civic education, service to state government, or commitment to giving. Rizzolo was instrumental in the successful effort to pass the resolutions to amend the Connecticut Constitution to allow for early voting and universal access to absentee ballots, as well as the expansion of Automatic Voter Registration, the restoration of voting rights to people on parole, and making the popular secure absentee ballot drop boxes a permanent feature of Connecticut elections.

“Carol is a force of nature,” said Merrill. “Her passion and advocacy were vital to Connecticut’s expansion of voting rights and voter access in the past legislative session. I look forward to working with her over the next few years to pass and implement early voting and universal access to absentee ballots, as well as ensuring that every Connecticut citizen is able to easily register and every registered voter can conveniently vote.”

“This has been an amazing collaborative effort and I want to thank each and every advocate for voting rights for all of the hard work they put in to help to make Connecticut a model for the nation,” said Rizzolo. “I am only the tip of the spear in this work, And each and every activist, organizer, and citizen who reached out to their communities and their legislators have played an important role in expanding voting rights in our state!”

Rizzolo had a more than a twenty-year career as a Physician Assistant providing health care services and counseling to young people and their families and has extensive training in both pediatrics and end-of-life care. She then earned a doctorate in Mythology and Depth Psychology and became certified as a Personal and Executive Coach. Rizzolo spends most of her time organizing grassroots activists and helping Connecticut residents communicate with their legislators on key issues.

The NASS Medallion Award allows individual Secretaries of State to recognize outstanding service and dedication to furthering the mission of the National Association of Secretaries of State (NASS) within each state. The award was created to honor individuals, groups, or organizations with an established record of promoting the goals of NASS in one or more of the following areas: Elections, with special emphasis on voter education and participation; civic education, including the teaching, promotion, and study of this subject; service to state government, specifically as it relates to the duties of the office of the Secretary of the State; a commitment to giving – a business or individual whose philanthropic contributions have significantly enhanced the quality of life in a local or regional area within a state, or within an entire state. 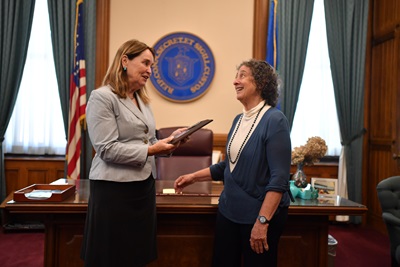