Connecticut Teacher of the Year 2019 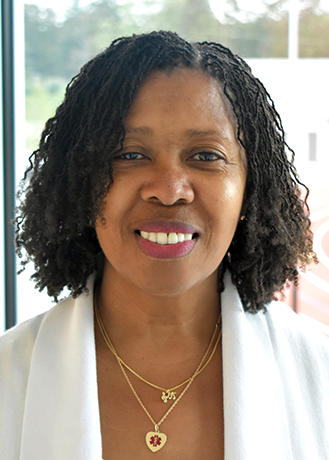 Sheena Graham is proud to say that she is currently in her 36th year of teaching! She has worked with students across grade levels throughout her career and continues to be energized by her students and colleagues.

At Harding High School and Central High School in Bridgeport, Sheena’s classes included teaching choir, a black history chorale, peer leadership, theatre, piano, and performing arts. Under her leadership, the Harding Cheerleaders brought home the Fairfield County "Spirit Stick” two years in a row, the Peer Leaders produced a CD to raise money for the homeless, and the Harding and Central School Choirs won a total of nine ‘Overall’ trophies, 31- first place trophies, 3 - second place team trophies, 24 individual trophies and after missing out on being Grand Champions by .04 points one year, the choir brought that title home the following year!

In her teacher leadership role Sheena has presented workshops such as: Music Lessons That Work, Parts 1 & 2, Incorporating Other Subjects Into Music Lessons, The Parent Teacher Connection, African American History in Your Classroom, Why We Sing, (the purpose of music in ministry), and Do You Read Me? She has volunteered as an accompanist for choirs in Bridgeport, Ansonia, and Danbury, where she directed Western Connecticut State University’s Gospel Choir for four years. In addition to her school choirs she is currently the director of a children's choir, Sisters of Praise, and a senior choir at the First Baptist Church of Stratford, under the leadership of Dr. William B. Sutton III, her pastor.

Sheena’s recording and writing experiences are extensive and wide-reaching. Some of her more recent songs include We’ve Not Forgotten You, for those affected by the L’Ambiance Plaza collapse, performed at the White House for Mrs. Obama, Dr. Biden, and the Governors’ wives on February 2014. Other songs include, Reaching Isn’t Always Easy, My Destiny, A Witness, for the Witness Breast Cancer Project, Somebody Might Be You, for child abuse victims, A Flame That Never Dies, written in response to the Newtown tragedy and other senseless deaths that occur all too often, It’s Not How You Start, performed by Tisdale students for Mrs. Obama at the 2016 White House Talent Show, and We Can If We Believe, performed at the Kennedy Center in March of 2018. Her current projects include, Maybe’s Won’t Save Me for bully/teen suicide prevention, and It’s Time For Change, a call to action for America in response to the senseless shootings involving police and of police. Her future projects include fully implementing V.O.I.C.E. Change, a course she is developing to encourage students to find what they are passionate about and use an artistic medium of their choice to encourage change. Sheena will also continue to publish original poetry, journals, greeting cards, and children's stories under her trademark, “JesusAids,” for the wounds within.