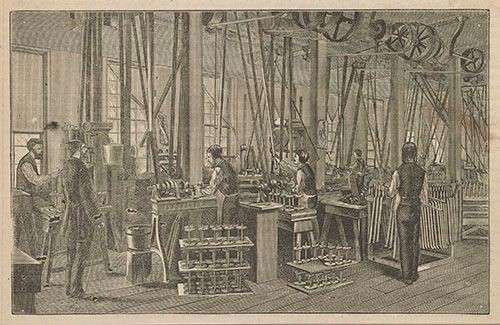 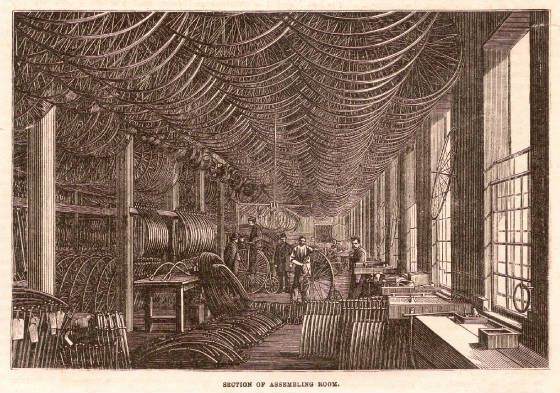 From: Mr. Columbia Pope Manufacturing in 1881

Hartford-based inventor Albert Pope saw his first bicycle at the 1876 Centennial Exposition in Philadelphia and was so impressed that he went to Europe to study how bicycles were made. He acquired the American patent rights, manufactured 50 test models in the empty wings of a Hartford sewing machine plant and in little more than a decade was making bicycles for the nation. An innovator both in terms of his products and the ways he marketed them, Pope continually looked for design modifications that would make his bicycles easier to use.  By hollowing out the bike’s steel tubes and limiting wheel friction, he was able to make his bicycles lighter and easier to pedal, and thus expand the market for his bikes to women and children—and he was not slow to advertise that fact.  Women in the late 19th century were quick to embrace the freedom and mobility that came with bicycling.  So closely associated were bicycles to the concept of independence for women, that civil rights activist and suffragist Susan B. Anthony declared, “The bicycle has done more for the emancipation of women than anything in the world.”

An Interview with Albert A. Pope, Cycling World of London, 22 July 1896

Hearing that Colonel Pope was in London, I sought him out in order to discover what he intended doing in England. I found him at the Savoy Hotel seated amidst a throng of business callers, but quite willing to give an interview. “What am I going to do in England?” repeated the Colonel, as I put the question to him. “Well, I’m afraid that’s just about the one thing I can’t tell you. I can tell you one piece of news, though—I shan’t set up a factory in England, for the very good reason that I fancy I can make the machines at my present factory and send them over here for less than it would cost to manufacture them in England.”

Q: “Colonel, will you tell me something about the Columbia machines?”

A: “Well, as an Englishman accustomed to English-made bicycles, I suppose you will be interested to hear that the weight of our machines is only 25 lbs. ‘all on.’ We are enabled to make a good bicycle of this weight because of the exceptionally fine materials that we use.  A great deal of the tubing is nickel-steel, which is fifty per cent stronger than any other tubing, inasmuch as it contains fifty percent of the carbon. So far as we know we are the only manufacturers in the world who can draw any quantity of nickel steel tubing.”

Q: “By the way, Colonel, what do you think of the boom? Is it going to last?”

A: “Yes, it is. I don’t think it has reached its height yet. Of course, after a time, the craze may subside a little, but I think there’ll be a steady increase in the demand for cycles.”

Author’s Note: In fact, 1896 was the peak of the bicycle boom, which was over by about 1900. Pope, in fact, had already begun to diversify, initiating experiments with automobiles starting in 1895.

Q: “I should like to have a few particulars concerning the construction of your machines, if I may?”

A: “Certainly. In the first place let me tell you that we show our works to anybody who likes to see them, and we have a man who does nothing else but attend to visitors. Of course we should be careful about showing everything to a rival manufacturer, and we don’t allow anyone to see certain parts of the works. No other manufacturer can have such machinery.  I can’t give you any particulars, but I may tell you that one of those machines, with two men to look after it, will do the work of eighteen men. But to come to the cycles.  Every bicycle we make is subjected to the closest inspection before it is allowed to leave the works.  You may not know that a bicycle contains over 800 separate pieces, and each one is examined thoroughly before it is put into the machine. This vigilance system is expensive, but I am confident that it is a good one. Another special feature of our business is our employment of expert cyclists whose work simply consists in riding about on machines of almost every make. These men test the machines in every conceivable way, their one idea being to think out a perfect bicycle.”

Q: “One more question, Colonel.” Would you mind satisfying the public curiosity by letting me have a few facts and figures about the cycle works?”

A: “You can get some idea of the extent of the place when I tell you that we have 17 acres of floorage. Then we employ 200 clerks who are stationed in a large building all to themselves, and over 2,000 workmen. We have our own rubber works, steel-tube works, printing works, telegraph office, &c, &c.  In fact, we make quite a little town by ourselves.” 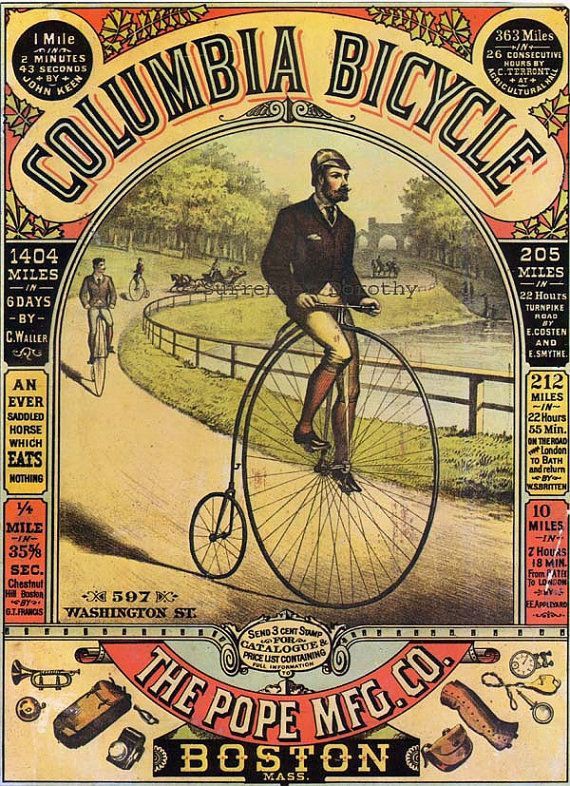 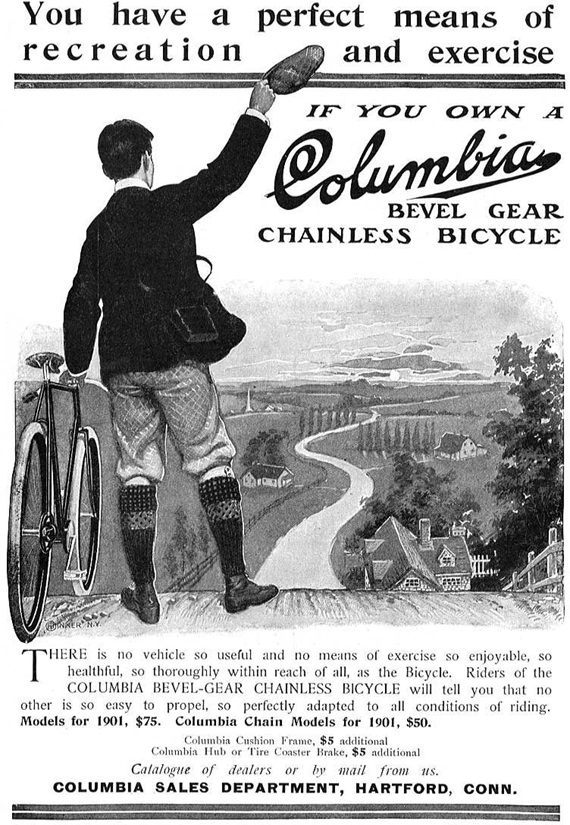 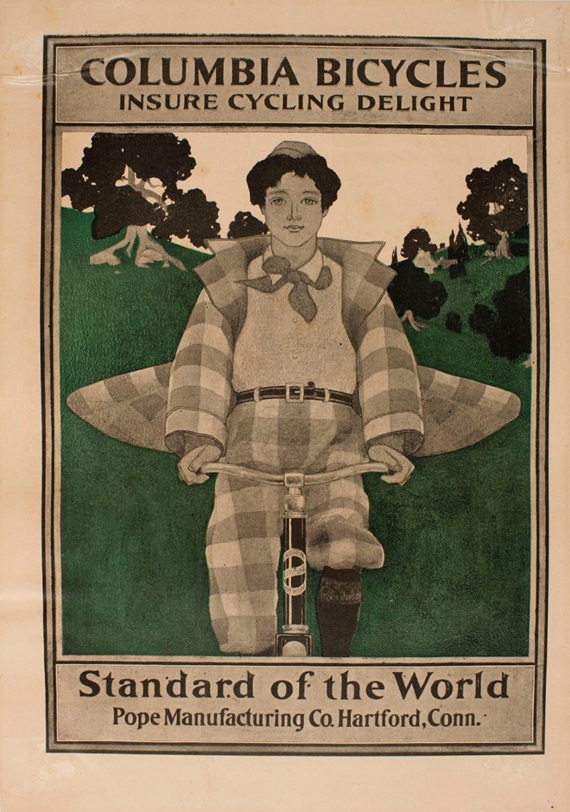 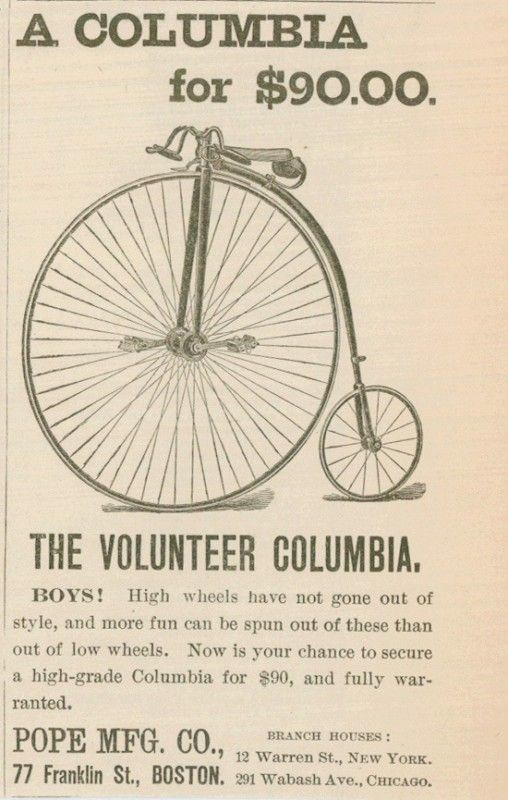 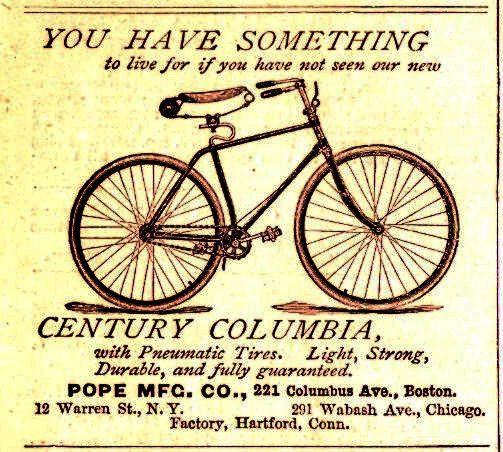 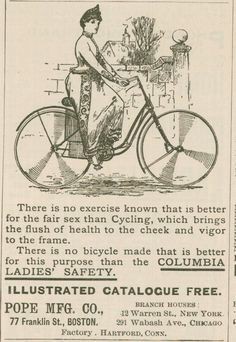 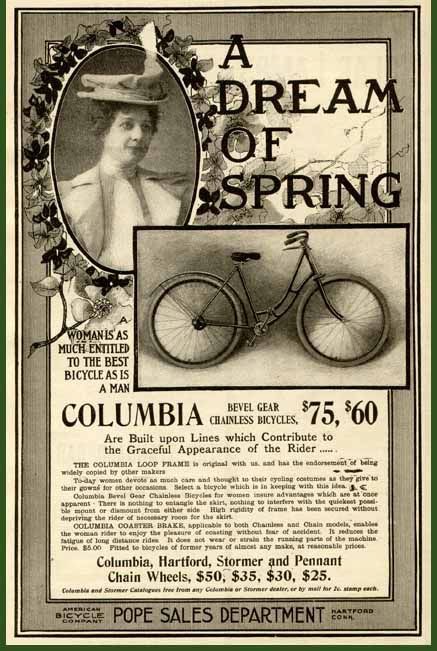 From the Connecticut Historical Society and the Library of Congress

Pages 5-6 from The Cyclists Book of Connecticut, the CT Division of the League of American Wheelman, 1888. Go to the text-only version.