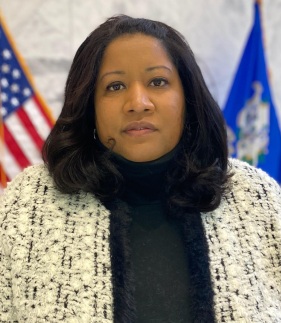 (HARTFORD, CT) – Governor Ned Lamont today announced that he will appoint Natalie A. Braswell of Bloomfield to serve as state comptroller upon the anticipated resignation of Comptroller Kevin Lembo on December 31, 2021.

Last week, Comptroller Lembo announced his intention to step down from his position on that date due to an ongoing medical condition. Upon the resignation of a constitutional officer, state law requires that when the legislature is not in session the governor must appoint a successor to fill the vacancy for the remainder of that constitutional officer’s term.

Braswell is currently the chief of planning, legal, and regulatory affairs at the Connecticut Department of Energy and Environmental Protection (DEEP) in a position that she has held since March 2021. From 2011 until beginning her current position at DEEP, she served as general counsel and assistant comptroller in the Office of the State Comptroller under the leadership of Comptroller Lembo.

During her tenure in the Office of the State Comptroller, Braswell was responsible for managing all legal matters for the office; negotiating and drafting contracts and personal service agreements; administering procurement processes; representing the agency in administrative proceedings before various state entities; researching legal issues impacting the agency; monitoring legislative changes that may impact the operations of the agency; managing outside attorneys who provide legal advice for the agency; and serving as the agency’s ethics liaison.

Governor Lamont said that Braswell’s decade of service in a leadership position at the Office of the State Comptroller provides her with a considerable amount of experience that will benefit her as comptroller. He also explained that it was important for him to select an appointee who expressed to him that they have has no interest in declaring their candidacy for the office during the upcoming November 2022 election, saying that it is important for public trust that the decision remain clear of politics.

“The circumstances surrounding the need to make this appointment are incredibly unfortunate and something I wish I didn’t have to do, but I am very pleased that we were able to select someone who has an incredible amount of experience working in the comptroller’s office and can hit the ground running,” Governor Lamont said. “Natalie spent a decade working as general counsel and assistant comptroller under Kevin Lembo, and I am confident that this will be a smooth transition, not only when it comes to maintaining the exceptional public service that Kevin has provided, but also for the dedicated staff who work in the comptroller’s office and are responsible for carrying out the office’s duties each day. I appreciate Natalie for her willingness to take on this leadership responsibility, which will no doubt consume a lot of her time over the next year.”

“I am honored and humbled to be appointed to finish out the term of a dear friend, mentor, and model public servant in Kevin Lembo,” Braswell said. “Though I have always thought of myself as a public servant, not a public figure, I view this as an opportunity to positively impact the people of Connecticut and continue the transformative work done by Kevin during his tenure. Like many across the state, I was heartbroken to learn of Kevin’s resignation. I’ve been fortunate to see firsthand the culture of innovation and expertise that he has built at the comptroller’s office. He will leave behind a legacy of tremendous accomplishment and an agency full of talented and dedicated staff ready to continue that work. I thank Governor Lamont for his confidence in me, and I will work diligently and passionately every day for the people of Connecticut in this new role.”

“Natalie Braswell is a brilliant attorney, a dedicated public servant and an expert on the work of the comptroller’s office,” Comptroller Lembo said. “As assistant comptroller and general counsel, Natalie earned the respect of everyone in the agency and across state government. She has critical experience in contract negotiations, labor relations, technology implementation projects, and other key areas that will be of high importance over the next year. More than that, she is a wonderful person who will serve with compassion, toughness, and a genuine desire to do what’s right. I’m thrilled that Natalie will follow me as comptroller and am positive that she will do tremendous work in the role. Thank you to Governor Lamont and his staff for working closely with me on this decision. Their hard work and careful consideration are greatly appreciated and have resulted in a selection that will ensure the comptroller’s office continues to meet the high standards Connecticut residents deserve.”

Prior to joining state service, Braswell worked as an associate attorney with the law office of Updike, Kelly & Spellacy in Hartford from 2007 and 2011.

Upon being administered the oath of office on December 31, Braswell will serve as state comptroller through January 4, 2023.