Program Will Invest $1 Billion in Connecticut by 2032, 35% To Benefit Overburdened and Underserved Communities 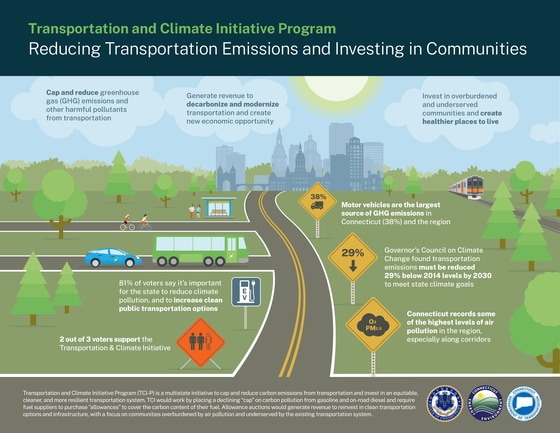 The bipartisan Transportation and Climate Initiative Program (TCI-P) will guarantee Connecticut at least a 26 percent reduction in carbon emissions from transportation from 2022 to 2032, and is anticipated to generate annual revenue of up to $89 million in 2023, increasing to as much as $117 million in 2032. Connecticut will re-invest these funds in equitable and cleaner transportation options, creating an employment program across transit, construction, and green energy, and a catalyst for infrastructure development through the next decade and beyond.

TCI-P was developed through a collaboration of Northeast, Mid-Atlantic, and Southeast jurisdictions, known as the Transportation and Climate Initiative (TCI), with extensive outreach and input from thousands of people, businesses, and organizations. Several other jurisdictions released a joint statement signaling their continuing commitment to work with Connecticut, Massachusetts, Rhode Island, and the District of Columbia on the development of the regional program while pursuing state specific initiatives to reduce emissions and provide clean transportation solutions.

“Engaging in this way with my fellow governors and Mayor Bowser accomplishes goals we have set for Connecticut for years,” Governor Lamont said. “Participating in the TCI-P will help grow our economy through a fresh injection of capital to provide for jobs and new infrastructure. This collaboration will cut our greenhouse gas emissions, and it will make our urban centers healthier, after decades of being adversely impacted by the emissions being released by traffic every day. Connecticut has always taken pride in our leadership role when it comes to climate, and when we can combine that with a stronger economy, fast transit systems, and regional cooperation, that’s a win for all of us.”

In a region with nation-leading climate goals, Massachusetts, Connecticut, Rhode Island, and the District of Columbia are committing to bold action to ensure the achievement of emissions reduction targets while positioning the jurisdictions and region as leaders in the clean transportation economy. Accounting for 73 percent of the transportation emissions, 76 percent of the vehicles, and 75 to 80 percent of the gross domestic product in New England, the three states and the District of Columbia are taking this action at a time when the impacts of climate change continue to be felt across the country and region.

“As a commonwealth, we have an obligation to address climate change head on and a challenge this great requires action across our region and nation,” Governor Baker said. “That’s why I am proud to join Governor Lamont, Governor Raimondo, and Mayor Bowser to launch this trailblazing program to reduce greenhouse gas emissions while building the clean, resilient transportation system of the future. By partnering with our neighbor states with which we share tightly connected economies and transportation systems, we can make a more significant impact on climate change while creating jobs and growing the economy as a result. Several other Transportation and Climate Initiative states are also committing to this effort today and we look forward to these partners moving ahead with us as we build out this first in the nation program.”

“Joining the Transportation and Climate Initiative is an investment in Rhode Islanders,” Governor Raimondo said. “This first-of-its-kind program will provide $20 million annually for public transit, safe streets for bikers and pedestrians, and other green projects. Most importantly, it will provide much-needed relief for the urban communities who suffer lifelong health problems as a result of dirty air. I look forward to working with the Rhode Island General Assembly to launch this program and protect the health of Rhode Islanders.”

“My vision is for the District to be the healthiest, greenest, most livable city for all our residents,” Mayor Bowser said. “To realize that vision, we have ambitious goals – for mobility, equity, and climate – and this program is an opportunity to accelerate all three, together. That’s why I’m proud to join this collaboration, leveraging a multi-jurisdictional commitment to cutting pollution to deliver real health benefits and investment dollars for all eight wards.”

The jurisdictions commit through this MOU to allot no less than 35 percent of the annual proceeds to assist communities overburdened by transportation pollution and associated negative health impacts and underserved by the current transportation system. Connecticut will designate an equity advisory body with diverse representation and community involvement to advise on developing criteria to identify overburdened and underserved communities, provide recommendations for investments, and assist with developing metrics to evaluate the success of those investments.

The program comes at a time when the impacts of climate change continue to be felt across the state, the region, and beyond. Transportation is responsible for 38 percent of GHG emissions in Connecticut. Exposure to air pollution exacerbates lung and heart ailments, causes asthma attacks, and increases the risk of a stroke and other serious health conditions. Prolonged exposure to air pollution may make it more difficult to recover from diseases like COVID-19, according to a recent Harvard School of Public Health report.

Starting this program now provides an immediate shot to the state’s socio-economic recovery from the COVID-19 pandemic, making available as much as $89 million in allowance auction proceeds to Connecticut in just the first year alone to provide better transportation options that result in less pollution, improved health, and a growing economy.

“Today’s commitment shows that Connecticut is not just setting ambitious climate targets, but taking the steps needed to reach them,” Connecticut Energy and Environmental Protection Commissioner Katie Dykes said. “For the first time, Connecticut will be capping carbon pollution from transportation – a priority of the Governor’s Council on Climate Change process. By embracing TCI-P’s regional approach, including a commitment to investing equitably in our most overburdened and underserved communities, we will reduce transportation sector GHG emissions by 26 percent over the next decade while modernizing our transportation system and addressing tangible inequities in health, quality of life, and mobility.”

“This collaborative regional approach will better position transportation to be the state’s largest solution to carbon emissions, instead of its largest source,” Connecticut Transportation Commissioner Joseph Giulietti said. “We know the contributing role transportation can play in curbing climate change and improving our communities. In Connecticut, families and businesses can continue to thrive if we keep moving towards alternative fuel vehicles, investing in public transit, and creating more livable communities with bike and pedestrian infrastructure.”

TCI-P will work by requiring gasoline and diesel fuel suppliers to purchase emission allowances for the pollution caused by the fuels they sell in participating states. The total number of allowances would decline each year, resulting in less transportation pollution. Each participating jurisdiction will independently decide how to invest program proceeds to achieve the goals of the MOU.

In developing TCI-P, the TCI jurisdictions engaged stakeholders across the Northeast and mid-Atlantic region and received input from more than 10,000 people and organizations as part of an extensive policy development process. These comments and input demonstrate overwhelming and wide-ranging support for TCI-P, including many national, regional, and local businesses and employers; transportation, health, environment, labor, and equity organizations; and the public.

With the signing of the TCI-P MOU, there will be additional opportunities for the public and stakeholders to provide feedback during the development of the TCI-P Model Rule and, in some jurisdictions, legislative and regulatory processes.