Second Person Diagnosed with EEE in Connecticut Has Passed Away; Residents Advised to Protect Themselves and Their Children by Avoiding Outdoor Activity From Dusk to Dawn

(HARTFORD, CT) – Governor Ned Lamont is advising people in Connecticut to take proper precautions to protect themselves against Eastern Equine Encephalitis (EEE) as state public health officials announced that the second person to be diagnosed with the virus this year in Connecticut has passed away. The patient, an adult resident from Old Lyme, was hospitalized with encephalitis in mid-September and is the second human fatality from the virus in Connecticut since 2013.

“State government is being cautious on peoples’ behalf and we are just warning folks to be careful, but there is no need to panic,” Governor Lamont said. “We want to make sure that we are doing everything we can to provide updated information on these developments to the people of our state. If you must be outside early in the morning or at dusk, it’s a good idea to take some simple precautions.”

“Our number one priority right now is informing the public about precautions they can take to reduce risk of infection,” Lt. Governor Susan Bysiewicz said. “Don’t panic, but please remember to use bug spray, wear long sleeves and pants, and try to avoid spending time outdoors after dusk. The good news is that as we continue to track and test mosquitos throughout Connecticut, we are seeing a dramatic decrease in the number of mosquitos testing positive for this virus as the cooler weather approaches.”

“The death of two Connecticut residents with EEE virus emphasizes the seriousness of this infection,” DPH Commissioner Renée Coleman-Mitchell cautioned. “Approximately a third of patients who develop EEE die and there is no specific treatment for EEE. Using insect repellent, covering bare skin and avoiding being outdoors from dusk to dawn are effective ways to help keep you from being bitten by mosquitoes. Mosquitoes continue to be active until the first heavy frost.”

Yesterday, CAES identified EEE virus in a type of mosquito that bites only birds at the trap site in South Windsor. Given the amount of EEE activity being seen in eastern Connecticut, this finding in South Windsor is of public health concern. Residents of South Windsor are advised to protect themselves and their children by: (1) taking personal precautions to prevent mosquito bites, and (2) minimizing outdoor activity from dusk to dawn, when mosquitoes are most active. If outdoor activity is unavoidable, all personal precautions to prevent mosquito bites should be taken.

Dr. Theodore Andreadis, Director of CAES, said, “Right now, we are seeing that the greatest risk is east of the Connecticut River. However, the very good news is that as we monitor our mosquito population, we are seeing a significant overall decline in the number of mosquitoes collected in our statewide trapping as well as the number of mosquitoes infected with the EEE virus.” 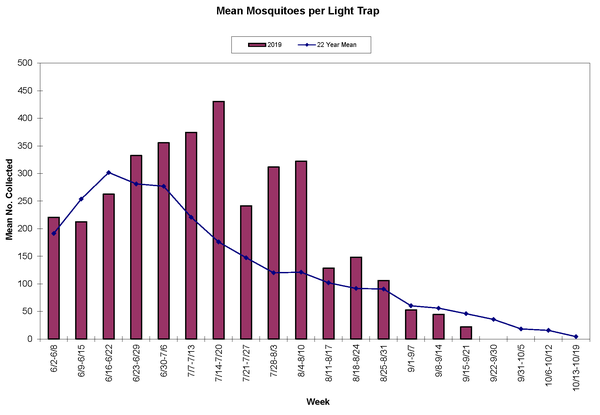 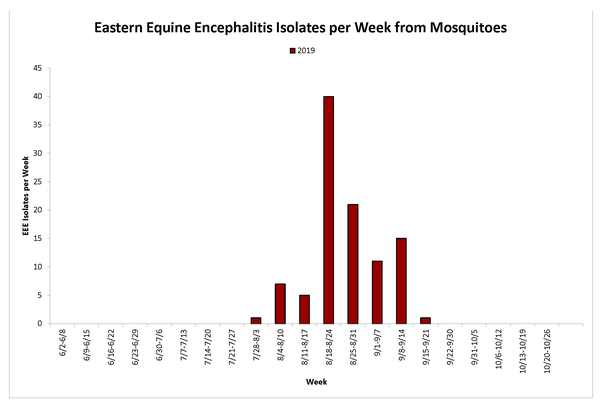 Graphs showing weekly mosquito trapping data since June reveal dramatic declines in both the overall amount of mosquito activity and the number of trapped mosquitoes testing positive for EEE. States throughout the Northeast are also experiencing an active season for EEE. In addition to the virus being found in mosquitoes, there have been ten human cases of EEE infection in Massachusetts, including two fatalities, and three human cases in Rhode Island, including one fatality. Although EEE-infected mosquitoes continue to be detected in the southeastern corner of Connecticut, the numbers are declining and we are not experiencing the excessively high levels of activity seen in Massachusetts. There are currently no plans to implement widespread pesticide sprays in the state.

Katie Dykes, Commissioner of DEEP, said, “DEEP has been pleased to have strong interagency collaboration through weekly conference calls to monitor the prevalence of mosquitos and assess the appropriate response, including ground level spraying that we have conducted at Pachaug state forest. One of the most important things we’re doing is providing people information so they know what measures they can take to keep themselves and their families protected and safe.”

It takes four to ten days after the bite of an infected mosquito to develop symptoms of EEE. Severe cases of EEE virus infection result in encephalitis, an inflammation of the brain.

DPH continues to advise against unnecessary trips into mosquito breeding grounds and marshes as the mosquitoes that transmit EEE virus are associated with freshwater swamps and are most active at dusk and dawn. Overnight camping or other substantial outdoor exposure in freshwater swamps in Connecticut should be avoided. Even though the temperatures are getting cooler, mosquitoes continue to be active until the first heavy frost and residents should continue to take measures to prevent mosquito bites.

The management of mosquitoes in Connecticut is a collaborative effort involving DEEP, CAES, and the DPH, together with DOAG and the Department of Pathobiology at UConn. These agencies are responsible for monitoring and managing the state’s mosquito population levels to reduce the potential public health threat of mosquito-borne diseases.

For information on what can be done to prevent getting bitten by mosquitoes and the latest mosquito test results and human infections, visit the Connecticut Mosquito Management Program web site at portal.ct.gov/mosquito.

For more information about EEE prevention, visit the CDC website.