Lamont: “Access to Ultra-Fast Internet Speeds is Critical to our Economic Future. I Want Connecticut to be Ahead of the Curve.”

(STAMFORD, CT) – Governor Ned Lamont today joined lawmakers and industry leaders from the state’s telecommunications companies for a bill signing ceremony to commemorate the adoption of legislation the governor introduced that will accelerate the deployment of high-speed, wireless 5G technology in Connecticut.

When compared to today’s wireless networks, 5G networks are up to five times more responsive, up to 100 times faster, and allow up to 100 times more devices to be connected, opening up multiple benefits for residents, businesses, public safety departments, and educational institutions.

While there is a process in place for the placement of 5G infrastructure on utility poles and wires, in many high-density areas utility distribution infrastructure is undergrounded, requiring alternative siting to ensure adequate coverage. This legislation sets up a process to set 5G infrastructure on state property, and also establishes a process for municipalities that are interested in taking advantage of the technology in cases where utility or light poles are not available.

“There is a direct connection between the ability of nearly every sector of our economy to conduct business and their ability to connect to high-speed networks,” Governor Lamont said. “To stay ahead in today’s global economy, businesses need the ability to move files and information around the world at lightning speed. Access to ultra-fast internet speeds is critical to our economic future. I want Connecticut to be ahead of the curve, and to do that we are moving quickly on deploying 5G access across our state. I want to build a Connecticut that has a national reputation for being at the forefront of these kinds of modern, technological advancements so that when businesses are trying to decide where to locate to take advantage of the best that technology has to offer, they know Connecticut is where they need to be.” 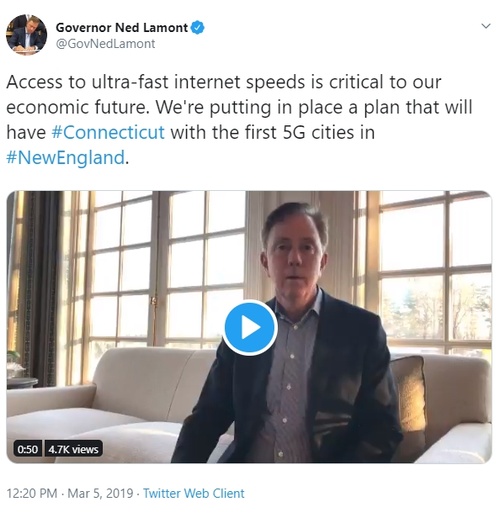 Telecommunication leaders are applauding the signing of the bill.

“Wireless services are a virtual highway for business and commerce,” John Emra, president of AT&T Connecticut, said. “We commend Governor Lamont and the legislature for their work in introducing and spearheading the passage of this important law which will help to facilitate the deployment of cutting-edge wireless technologies to improve service for our customers and grow our economy. In 2018 alone, AT&T made some 495 network upgrades in the state of Connecticut. The passage of Governor Lamont’s legislation will speed our wireless build out plans in Connecticut with tens of millions of dollars dedicated to improving our mobile network and pave the path to 5G mobile services.”

“We applaud the actions of Governor Lamont and the Connecticut legislature as he signs this bill into law,” David J. Lamendola, Director of State Government Affairs for Verizon New York and Connecticut, said. “This bill sends the message that Connecticut is open for investment in next-generation technology. Verizon will invest hundreds of millions of dollars locally over the next several years as we build our network, including 5G that will pave the way for new jobs and innovation.”

“T-Mobile congratulates Governor Lamont on the passage of this legislation to help advance the transformative next generation of wireless technology in Connecticut,” Kathleen Ham, Senior Vice President of Government Affairs for T-Mobile, said. “T-Mobile is committed to deploying a broad nationwide 5G network that will fuel innovation and bring new competition and economic growth to underserved and rural areas across Connecticut and the U.S.”

The legislation is Public Act 19-163, An Act Accelerating the Deployment of 5G Wireless Facilities.