(HARTFORD, CT) – Governor Ned Lamont today announced that he has signed legislation that will ensure insurance coverage for people in the state suffering from mental health and substance use disorder conditions as they would for other illnesses. The law – known as the “Mental Health Parity Act” – delivers parity for behavioral healthcare, recognizing that mental health and substance use conditions are equal to physical illnesses.

“Diseases of the brain should not be treated any differently than diseases of the body, and Connecticut’s laws should reflect that,” Governor Lamont said. “By signing this into law we are taking a major step forward toward removing the stigmatization that so many people with mental health and substance use disorders face, and knocking down barriers so they can get the treatment they deserve.”

“We remain steadfast in our commitment to protecting consumers seeking mental health and substance abuse treatment,” Connecticut Insurance Department Commissioner Andrew N. Mais said. “We hope Connecticut’s laws serve as a model so that all consumers, including the many in federally regulated employment-based group health plans, have the same protections.” 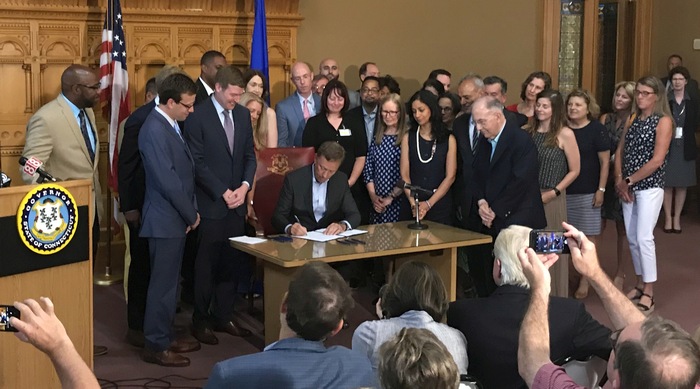 The legislation was spearheaded in the General Assembly by State Representative Sean Scanlon (D-Branford, Guilford), State Senator Matt Lesser (D-Middletown), and State Representative Brenda Kupchick (R-Fairfield) in response to a December 2017 study by independent actuarial firm Milliman that showed Connecticut had some of the nation’s worst disparities for access to affordable mental health care services. The Milliman study found that patients were forced to use expensive out-of-network coverage far more often for mental health and substance use disorder care than for other types of medical care because coverage for the disorders was inadequate and because there is a shortage of mental health providers.

“For too long Connecticut has lagged behind the rest of the nation when it comes to ensuring equal treatment for those with mental illness and substance use disorder,” State Representative Scanlon said. “After a long fight for fairness, today’s bill signing represents a new day for our state when it comes to ending discriminatory insurance practices and making sure everyone in Connecticut has access to the care they need.”

“Passing mental health and substance abuse parity is easily one of the most important legislative accomplishments of the year,” State Senator Lesser said. “I was glad to work with so many allies, including former Congressman Patrick Kennedy, on this nationally important legislation. Mental health and substance abuse are issues in one way or another for just about every family in Connecticut. It is crucial that we fight the stigma and that our laws keep up – to make sure families in crisis have the insurance coverage they need. As Connecticut faces the opiate epidemic in particular, this legislation will make it much harder for insurance companies to throw up roadblocks to life-saving care.”

“The years of listening, learning and fighting for mental health parity has paid off,” State Representative Kupchick said. “I’m honored to work on this historic, bipartisan law signed by the governor today. By expanding access to care, this bill will save lives. Since the tragedy in Sandy Hook, I have strongly advocated for real access for mental health. The unfortunate truth has been Connecticut residents with a physical health issue, such as a heart ailment are treated without delay, but those with a mental health issue, have been stuck in a maze of bureaucracy trying to get the help they need.”

The Connecticut Parity Coalition, made up of advocates and nonprofit groups including Mental Health Connecticut, has supported passage of mental health parity legislation in Connecticut for several years. They worked closely with national advocates who have written model legislation, on which the Mental Health Parity Act is based. Connecticut’s health insurers, through the Connecticut Association of Health Plans, were actively engaged in negotiating the final agreed upon language.

“Passing this legislation is an important step towards ensuring that Connecticut’s consumer rights are protected and that barriers are removed to access mental health and substance use services,” Suzi Craig, head of the Connecticut Parity Coalition and Senior Director of Partnerships and Policy at Mental Health Connecticut, said. “Connecticut will now join the majority of states in the U.S. that are requiring private health insurance plans to comply with the federal law. The coalition can’t thank our legislators and supporters enough for making this a top priority in 2019 and for showing Connecticut that mental health and substance use care is a part of ‘health’ care.”

“Today, Connecticut is sending a clear message that insurer discrimination against those with mental health and substance use disorders will no longer be tolerated,” Kennedy said. “By holding health plans accountable under the Federal Parity Law, this legislation will increase access to care and save lives. As rising rates of suicides and overdoses continue to devastate families nationwide, we need action, not just words. On behalf of patients and their families, I thank Governor Lamont for signing the Mental Health Parity Act and committing to its full implementation and enforcement.”

The law takes effect on January 1, 2020. Insurance companies will need to file their first annual report with the state by March 1, 2021.

The legislation is Public Act 19-159, An Act Concerning Mental Health and Substance Use Disorder Benefits. It received the unanimous, bipartisan support of legislators in both chambers of the General Assembly.