(HARTFORD, CT) – Governor Ned Lamont today announced that he is directing executive branch state agencies to begin a major restructuring of their human resources operations in an effort to reduce bureaucracy and implement efficiencies with the goal of improving the ability of residents to interact with the state, all while saving taxpayer dollars.

The governor, who has been in office for a little over six months, explained that one of his top priorities as the state’s chief executive upon taking office has been to streamline the processes of state agencies in a way that reengineers how state government serves its residents, particularly through a transformation of operations and modernization of the technologies the state uses.

To begin this process, Governor Lamont this morning signed Executive Order No. 2, which directs the execution of a human resources centralization plan in order to provide state government with the highest quality human resources services at the lowest possible cost, and further the uniform administration of processes, systems, and functions among state agencies. Office of Policy and Management (OPM) Secretary Melissa McCaw, Department of Administrative Services (DAS) Commissioner Josh Geballe, and Governor Lamont’s Chief Operating Officer Paul Mounds, Jr. will be responsible for leading these efforts. The executive order also creates a steering committee, co-chaired by Commissioner Geballe and Secretary McCaw, to provide governance for the initiative and oversight of the planning and implementation of the plan.

This is believed to be the first time the executive branch has ever commenced a restructuring of its human resource offices.

“As a business owner, I understand the critical need to continually evaluate how your operations are functioning in order to ensure that you are being cost-efficient while providing the best possible services to your customers,” Governor Lamont said. “There are a number of duplicative functions within state government that we should streamline in order to drive down costs and make interacting with government easier for residents. We are going to break down artificial silos and centralize functions that don’t require independent fiefdoms, knocking down bureaucracies that were allowed to needlessly develop over many years that don’t serve a logical or financial purpose. My mission is to give Connecticut residents the best possible services at a cost-efficient level, all while implementing modern technologies that make it easier to interact with state government.” 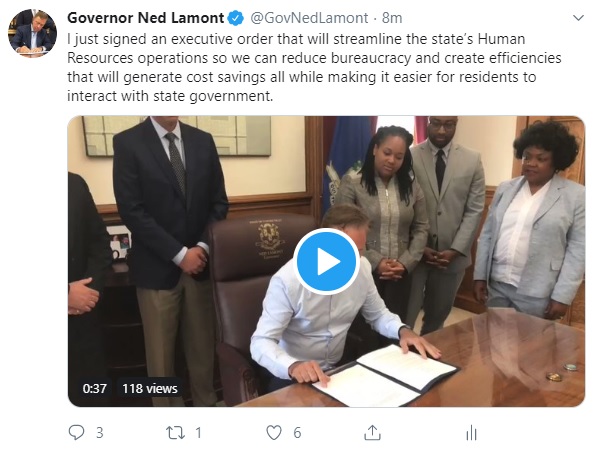 Under the centralization plan required by the governor’s executive order, some human resources staff will continue to work onsite at their assigned agencies to support the management of each agency’s workforce, reporting to DAS and OPM respectively, while staff who perform more specialized functions, such as recruitment, workers’ compensation, benefits, and leave administration will be organized into service teams and eventually be assigned to work from a centralized location. Once fully implemented, the initiative is expected to result in cost savings based primarily on forecasted retirements in the human resources functions that will not require full replacement.

Moving forward over the next six months, DAS and OPM will work with agencies to:

“The centralization of human resources and labor relations is a key component to the state operating as one employer and will serve as a driver in our efforts for effective inter-agency coordination,” Chief Operating Officer Mounds said.

“This is another step to making Connecticut’s government smarter and more efficient,” Secretary McCaw said. “We have already succeeded in identifying new opportunities to improve functions and maximize efficiencies in government operations during the Lamont administration to reduce expenses and enhance performance. Now, as we standardize policies and practices across human resources and labor relations, we will be able to share resources and leverage expertise to manage the state workforce and relationships with stakeholders more efficiently and productively. This centralization of services will certainly help us continue to deliver high quality and lower cost services for our employees and their families and keep the state moving in the right direction.”

“The centralization of human resources staff will enable us to improve collaboration, increase efficiency, and provide more nimble and responsive services to agencies and employees,” Commissioner Geballe explained. “Technology will play a pivotal role in this transformation.”

Fae Brown-Brewton, OPM Under Secretary for Labor Relations, will be responsible for directing the agency labor relations consolidation planning and execution.

To provide the public with information on the centralization plan, a website has been created and includes answers to frequently asked questions, a PowerPoint presentation, and other resources. It is available at portal.ct.gov/hrcentralization and will be updated with useful information as the plan develops.