(HARTFORD, CT) – Governor Ned Lamont today joined Lt. Governor Susan Bysiewicz, Connecticut Department of Transportation (CTDOT) Commissioner Joe Giulietti, U.S. Senator Richard Blumenthal and other federal, state and local officials to commemorate the one-year anniversary of the launch of the CTrail Hartford Line – the passenger rail service that has multiple stations in Central Connecticut along the I-91 corridor connecting New Haven, Hartford, and Springfield. When it launched last year, the Hartford Line was the first rail line to open for service in Connecticut since 1990.

During its first 12 months of service, an estimated 634,000 passengers used the service, according to a “year one” report that was released today by CTDOT. That is about 51,000 more than originally projected for the first year.

“We need to dramatically improve our transportation system to compete in a 21st century economy that attracts businesses and provides the critical infrastructure needed to move goods, services, and people,” Governor Lamont said. “The Hartford Line is one component of creating a fast, efficient transportation system that works. It’s only been one year and ridership has been higher than expected but we cannot stop here – we must build the infrastructure that businesses and commuters need for today’s economy.”

The opening of the Hartford Line accomplished more than just improving commutes in the area – it has invigorated development activity around each station. An estimated $430 million has been invested in new development in the corridor in recent years, much of it while the rail line was still in development.

Approximately 1,400 residential units and 242,000 square feet of commercial and office space have been constructed or are being designed. These new transit-oriented developments serve as places where people can live, shop, eat, and have fun, with easy access to commuting by rail. 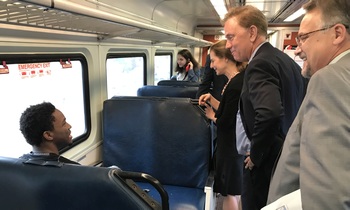 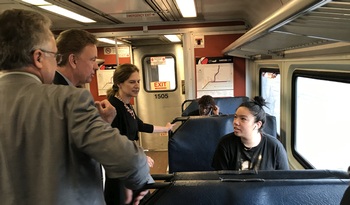 “The success of the Hartford Line is astounding and it goes to show that Connecticut residents will rely on public transportation when it is available,” Lt. Governor Bysiewicz said. “The Hartford Line was a great investment for our state as these improvements to the transportation system have spurred residential and commercial transit-oriented developments in numerous towns along the rail.”

“The Hartford Line is a success on every level,” Commissioner Giulietti said. “Riders consistently rave about the frequency of service and conditions on board. Even so, we continue to look for ways to improve schedules and reliability to meet the needs of our passengers.”

In a passenger satisfaction survey conducted in November, overall satisfaction on the service quality was high, with five ratings characteristics receiving a satisfaction score of at least 90 percent, led by the “on-board ticket collection” at 94.3 percent, and “courtesy of crew” at 93.5 percent. A strong majority of riders, 87.6 percent, reported being satisfied overall.

“The Hartford Line is an integral part of connecting Connecticut with major urban centers including Boston and New York, which will increase job opportunities for residents and enhance our overall quality of life,” Senator Blumenthal said. “The first year is an important first step in expanding capacity and service along the New Haven to Hartford line. I will work with state officials and rail advocates to ensure rail service that addresses commuter and traveler needs.”

“We’re glad the Hartford Line service has been a success for Connecticut residents and visitors in its inaugural year, and we look forward to many more successful years in the future,” Amtrak Assistant Vice President of Infrastructure Access and Investment Tom Moritz said. “We thank our partners at CTDOT, as well as the federal, state, and local officials who helped bring the Hartford Line service to fruition for the state of Connecticut.” 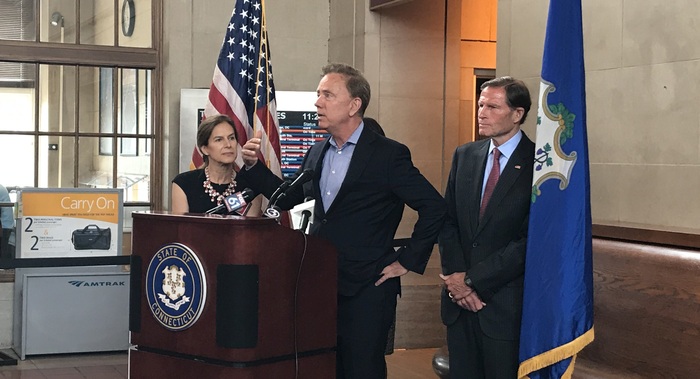 Prior to the launch of the expanded line, new stations were built in Berlin, Meriden, and Wallingford, joining existing stations in New Haven Union Station, New Haven State Street, Hartford, Windsor, Windsor Locks, and Springfield. Additional stations are currently being planned for North Haven, Newington, West Hartford, and Enfield. Nearly the entire corridor – 50 of the 62 miles – has now been “double-tracked” to facilitate the efficient movement of trains.