(HARTFORD, CT) – Joined by advocates and legislators at the State Capitol, Governor Ned Lamont this afternoon held a bill signing ceremony to commemorate the passage of two new laws that will enhance gun safety in Connecticut, including the banning of untraceable “ghost guns” and improving the storage of firearms in motor vehicles. Today also marks National Gun Violence Awareness Day.

Ghost guns are firearms that do not have serial numbers, most commonly because they are sold in parts that can be assembled at home, and thus are not required by current law to have a serial number. They are not recorded as a gun sale, making them impossible to trace if the firearm is used in a crime. Public Act 19-6, will prohibit anyone from manufacturing a firearm without subsequently obtaining and engraving or permanently affixing on it a unique serial number or other identification mark provided by the Department of Emergency Services and Public Protection.

The second bill, Public Act 19-7, attempts to address the rising numbers of gun thefts from motor vehicles that cities around the country have been experiencing in recent years. The law prohibits storing a pistol in an unattended motor vehicle unless that pistol is in the trunk, a locked glove box, or a locked safe. It makes first-time offenses a class A misdemeanor and subsequent offenses a class D felony. Law enforcement and certain security personnel receive are exempt from these requirements. 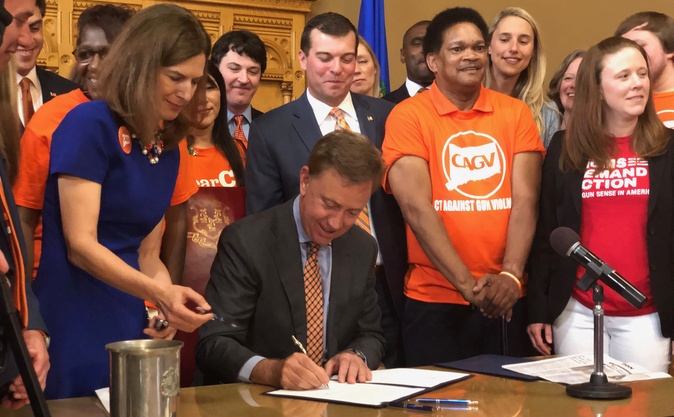 “The overwhelming majority of Connecticut residents want us to close the gaping loopholes that allow guns to get into the wrong hands, and any measure that encourages safe gun storage to help keep children, residents, and families safe is an action I will always support,” Governor Lamont said. “But I must stress – gun violence prevention laws only go so far without the support of our federal government. In our country, we have a patchwork of gun laws in each individual state – and as they say, we are only as strong as our weakest link. For the safety of our communities, we must demand federal action on this issue.”

“With the passage of these two measures the State of Connecticut continues to lead the nation on gun safety,” Lt. Governor Susan Bysiewicz said. “Research shows that states with strong gun safety laws have fewer deaths from gun violence. We are making the necessary strides in protecting our citizens and preventing gun violence. We hope that our stand here will implore other states – and even the federal government – to act as we have done and make these gun violence prevention laws the standard everywhere.”

“We applaud Governor Lamont for making history in Connecticut by signing three necessary gun violence prevention bills into law,” Jeremy Stein, Executive Director of CT Against Gun Violence, said. “We thank the governor, our coalition partners and volunteers for their dedication to fighting for a safer Connecticut. We are proud that Connecticut continues to lead the way with strong gun laws that will reduce gun violence and save lives.”