(GUILFORD, CT) – Joined by state lawmakers and advocates for commonsense gun safety laws, Governor Ned Lamont today held a bill signing ceremony on the Guilford town green to commemorate final passage of a measure closing a loophole in state statutes on the safe storage of unattended firearms in homes. Named “Ethan’s Law,” the legislation was sought by Kristin and Michael Song, the parents of Ethan Song, 15, who was shot and killed on January 31, 2018 while handling a .357 Magnum pistol at a neighbor’s house.

The pistol was one of three unattended firearms he and a friend knew were kept in a bedroom closet owned by the friend’s father. The firearms were stored in a cardboard box inside of a large Tupperware container. While each of the weapons were secured with operable gun locks, the keys and ammunition for the firearms were located inside of the same box.

At the time of the shooting, it was a class D felony to improperly store a firearm or leave it where a minor could get access without permission of a parent or guardian, but only if that stored gun was loaded. Prosecutors found no evidence to show that the gun was loaded at the time it was accessed, so the owner was not charged with a crime.

The bill Governor Lamont signed, Public Act 19-5, amends that statute to require that firearms be properly stored regardless of whether they are loaded or unloaded. It also changes the definition of a “minor” to anyone up to age 18, up from 16 under current law. 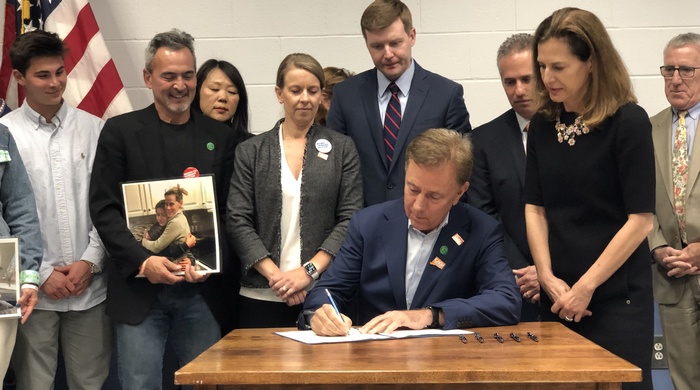 “The circumstances under which we are enacting this law are incredibly heartbreaking, and my heart goes out to everyone in the Song family and all of Ethan’s friends and classmates,” Governor Lamont said. “Laws that require gun owners to safely store firearms and ammunition in a manner that prevents minors from accessing them are commonsense and have near universal support, including among gun owners. In the face of tragedy, Kristin and Michael Song have remained determined to close this loophole and advocate for children’s safety, and on behalf of the entire state I want to thank them tremendously for their advocacy. It is in Ethan’s memory and the memories of other children who have been victims of tragedies such as this that I am signing this law.”

“This is about creating a safer Connecticut for our children and families,” Lt. Governor Susan Bysiewicz said. “No minor should have access to firearms or ammunition, and gun owners should be required to keep guns – both loaded and unloaded – in a safe, secure place. I commend Kristin and Mike Song for their strength and thank the entire Song family and other advocates for working so hard to get this bill passed with strong bipartisan support. This legislative session was historic in that we were able to pass three gun safety laws in just one year, making Connecticut a national leader, once again, on gun safety and gun violence prevention.”

The bill was introduced and championed in the General Assembly by legislators who represent Guilford, where the Song family lives.

State Representative Sean Scanlon (D-Branford, Guilford) said, “Ensuring that all firearms are safety stored and inaccessible to minors is common sense and working with the Song family to introduce and pass Ethan’s Law has been one of the greatest honors of not only my public service but my entire life. After an unspeakable tragedy, Kristin and Mike had the courage to turn their grief into real action so that other parents would never have to go endure what they had been through. I’ve been so proud to stand with them during their campaign to make Connecticut safer for children and am even more proud to stand with them today as Governor Lamont signs our bipartisan bill into law.”

State Senator Christine Cohen (D-Guilford) said, “Seeing Ethan’s Law come to fruition is truly remarkable - for the Songs, for the community their lives have touched, and now for the families that will be safer as a result of their perseverance. Out of a tremendous tragedy came a recognition that we were falling short in our laws. Today, we’ve rectified that thanks to all those that worked to make it happen.”