Over a Series of Several Years, Minimum Wage Will Gradually Rise to $15.00 and Then Become Indexed to Federal Economic Indicators

(HARTFORD, CT) – Governor Ned Lamont this morning signed legislation he championed alongside a number of state legislators that will increase the minimum hourly wage in Connecticut to $15.00 through a series of gradual increases over the next several years, with the first one taking place this October. After the scheduled increases take effect, the new law requires the minimum wage to grow according to federal economic indicators, so everyone can continue to share in Connecticut’s prosperity.

The governor signed the law at the Parkville Care Center in Hartford, where he was surrounded by advocates, working men and women, business leaders, and legislators, including State Senator Julie Kushner (D-Danbury) and State Representative Robyn Porter (D-New Haven), the co-chairs of the labor and public employees committee who passionately led the approval of the bill through the state legislature.

“This is perhaps one of the most impactful pieces of legislation for working families that a governor can sign, and I am proud to place my signature on this law because it is the right thing to do,” Governor Lamont said. “With this new law, thousands of hardworking women and men – many of whom are supporting families – will get a modest increase that will help lift them out of poverty, combat persistent pay disparities between races and genders, and stimulate our economy. This is a fair, gradual increase for the working women and men who will invest the money right back into our economy and continue supporting local businesses in their communities.” 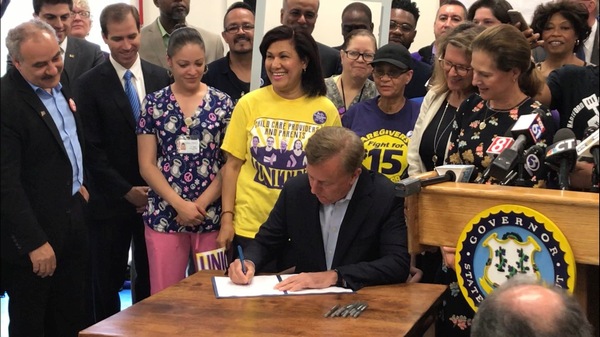 The new law requires the minimum wage to increase from its current level of $10.10 to:

The Connecticut Department of Labor and Connecticut Voices for Children estimate those increases will raise wages for approximately 130,000 workers this year and more than half a million by 2024.

Ultimately, beginning January 1, 2024, the law requires the minimum wage to become indexed to the employment cost index, which is calculated by the U.S. Department of Labor.

“Raising the minimum wage will address persistent pay disparities between different races and help bring us closer to eliminating the gender pay gap,” Lt. Governor Susan Bysiewicz said. “Nearly 60 percent of minimum wage earners in Connecticut are women. There are 170,000 households headed by women, and if we want to grow our economy we need to ensure that women have the financial security they need to provide for their families.”

“It has been one of the greatest honors of my life to serve as a state senator and to help negotiate and pass what may be Connecticut’s best minimum wage bill ever,” Senator Kushner said. “I have spent my entire life fighting with working people and their families to improve conditions, and I believe that the changes in this bill, over time, are going to make a significant difference in the quality of life for hundreds of thousands of Connecticut residents. Connecticut just got a raise!”

“Raising the minimum wage is going to benefit hundreds of thousands of people in Connecticut, especially people of color and working mothers,” Representative Porter said. “That extra disposable income for each low-wage worker will go right back into the local and state economies, benefiting our communities and local businesses and producing more revenue for the state. A higher wage also will bring more dignity into the workplace. In the end, all of Connecticut will benefit.”

The legislation is Public Act 19-4, An Act Increasing the Minimum Fair Wage. It was approved in the General Assembly along party lines.