Governor Lamont Announces Start of Congestion Buster Project on I-91 North in Hartford; Urges Reliable, Sustainable Investment so More Improvements Can Be Made Across Connecticut

(HARTFORD, CT) – Governor Ned Lamont today said that he is determined to fix notorious problem areas of traffic congestion in Connecticut, pointing to Exit 29 on I-91 northbound in Hartford as a prime example of a situation that is finally on its way to being fixed after nearly four decades of causing drivers too many hours of headaches and congestion.

This week, the Connecticut Department of Transportation (CTDOT) launched a “congestion-buster project” strategically targeted at alleviating the backups that have become all too common on the area of the interstate. Considered to be one of the worst bottlenecks in the country, the exit ramp connects drivers through a single lane of traffic over the Charter Oak Bridge, leading to Routes 5 and 15, and I-84. Due to a combination of factors, traffic at the exit ramp frequently backs up onto I-91 for more than a mile or more. The condition is exacerbated by the tendency of drivers to cut into the right-lane queue from the center lane, drastically reducing the capacity of the center lane and blocking traffic on I-91.

The CTDOT project involves relocation and construction of a new, two-lane exit ramp that will double the capacity and improve the geometry of the connector, relieving the bottleneck.

Governor Lamont said more alleviation projects like this could be started elsewhere around the state if a consistent, stable source of revenue is implemented. Budget analysts have warned that the gasoline tax, which serves as the primary source of funding for the state’s transportation system, is in serious decline signaling that Connecticut’s transportation fund – along with a number of other states throughout the country – is on track to become insolvent.

Yesterday, Governor Lamont wrote a letter to the members of the Connecticut General Assembly urging for immediate action on putting forth a new combined transportation bill.

“The people of Connecticut are sick and tired of sitting in traffic on outdated roadways that cannot handle the capacity of a 21st century transit system,” Governor Lamont said. “Let’s give our state modernized infrastructure that expands our ability to grow and compete. Connecticut needs a long-term solution to fix the 30-year patchwork that has left our state with a gaping fiscal hole that needs to be fixed. If this was an easy choice, it would have been made decades ago – we were elected to make the tough decisions that will move our state forward, and now is the time do to that.” 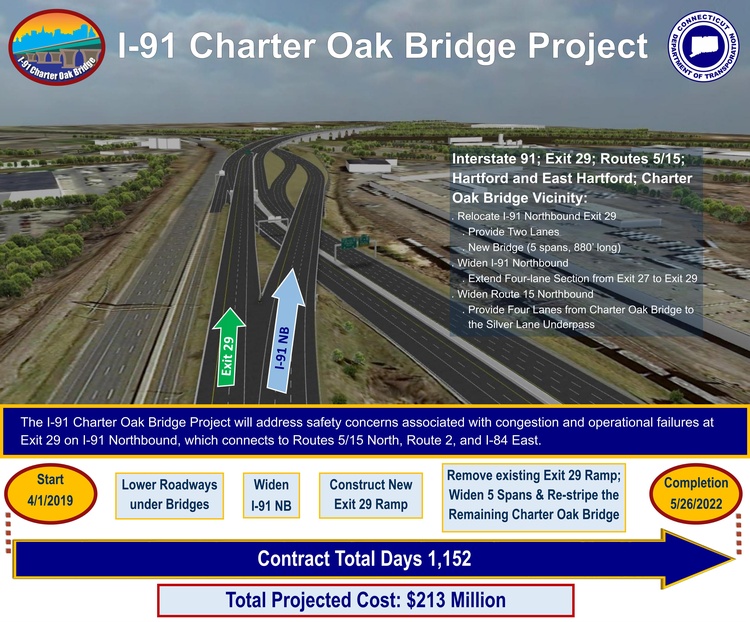 Work on the congestion-buster project started earlier this week and is anticipated to be completed before the start of summer in 2022.

For continuous updates on the project, residents are urged to visit www.I-91CharterOakBridge.com, where the latest information about work activities and any expected impacts to the public will be posted. Updates will also be made via Twitter at @91Oak.