Governor Lamont and Lt. Governor Bysiewicz Solicit Input From Transition Policy Committees as They Near Their 100th Day in Office 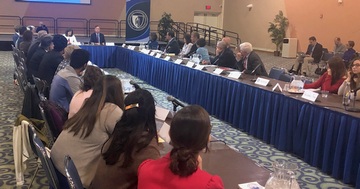 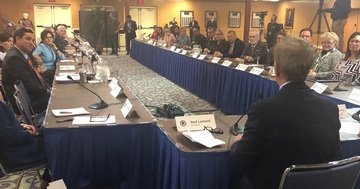 (NEW BRITAIN, CT) – As they approach the 100th day of their administration, Governor Ned Lamont and Lt. Governor Susan Bysiewicz convened a meeting with the co-chairs from each committee of their Transition Policy Working Groups to review the progress of the first 100 days and discuss priorities going forward. The governor and lieutenant governor highlighted their achievements that align directly with the proposals of the committees, solicited input from the chairs regarding priority recommendations the administration should focus on for next four years, and reaffirmed their commitment to ensure that committees meet with relevant commissioners.

The Transition Policy Working Groups were formed in the days following their successful election on November 6, 2018. The incoming administration held a policy summit attended by more than 450 people and announced the creation of 15 committees, which were each assigned a topic encompassing a wide variety of issues critical to Connecticut’s success. Dozens of residents were named to serve on the committees, with their memberships specifically designed to incorporate as many viewpoints as possible, regardless of political affiliation.

Immediately prior to taking the oath of office on January 9, each of the 15 committees supplied the incoming governor and lieutenant governor with policy recommendations to consider during their first days of their administration.

“We are grateful for all the good work of the Transition Policy Working Groups – work that laid the ground for many of the initiatives we’ve taken, from developing a leadership team in state government that is nearly 50 percent women and the most diverse in our state’s history, to eliminating red tape and making our state friendlier to business, to acting on the recommendations that will create a paid family and medical leave program, raise our minimum wage to $15 an hour, and continue our work to reform our state’s system for criminal justice,” Governor Lamont and Lt. Governor Bysiewicz said in a joint statement. “If we are not working together, we are not working. This means staying engaged and staying involved. Together, we are going to grow our economy, improve our communities, and create new opportunity for all of our residents and businesses.”

Many of the Transition Policy Working Group recommendations have already been implemented, including:

Governor Lamont and Lt. Governor Bysiewicz said they will continue consulting with the members of their transition team throughout their administration.

Council provides a coordinated state response to issues that impact the lives of women and girls, their families, and the State of Connecticut

February 4, 2019: LG Launches the Connecticut Complete Count Committee
Understanding that an accurate census count is critically important to our state as it is the foundation to determine federal funding allocations, the LG launched a statewide initiative to ensure Connecticut’s population is fully counted. Currently, Connecticut is ranked first in the nation for paying the most in federal income taxes and we are amongst the lowest in getting federal dollars in return.

February 12, 2012: Announces Debt Diet
Announces a proposal to shrink the state’s borrowing by 39 percent, the equivalent of hundreds of millions of dollars annually. Referring to it as a self-imposed “Debt Diet” the Governor is seeking to reduce long-term debt service payments and potentially save the state as much as $2 billion over the next decade.

February 16, 2019: Announces support for infrastructure investment plan to spur economic development and growth
A broad coalition of state, local, business and labor leaders support the Governor’s plan, which includes 40% of revenue from people who don’t even live in Connecticut. The revenue raised would be protected by federal law and the state’s Constitutional lockbox and be used to reduce congestion, enhance bridge and road safety, improve rail service and reimagine Connecticut’s transportation infrastructure for the 21st century.

February 20, 2019: Submits first budget proposal
Pro-growth budget proposes the structural changes necessary to address the state’s crushing fixed costs, while also investing in transportation, education and workforce/economic development. It’s a budget that makes tough choices, strategic investments and ensures that we put Connecticut on a path to growth for all its citizens.

February 21, 2019: Appointed to Council on Governors
Appointed by President Donald Trump to serve a two-year term on the Council of Governors, a bipartisan group of ten governors who are responsible for providing coordination between the states and the federal government on emerging threats and emergency response, synchronization and integration of state and federal military activities in the United States, and matters of mutual interest pertaining to the National Guard

March 8, 2019: Announces updated Family Violence Policy for state workers
Announces updated state policy regarding leave rights available to state employees who are victims of family violence and the procedures relating to such leave. Announced on International Women’s Day, the updated policy is being updated to better ensure that employees who are experiencing family violence receive appropriate support.

March 15, 2019: Announces agreement between Dominion and Eversource/UI
Announces that Dominion Energy and Connecticut’s two electric utility companies, Eversource and United Illuminating (UI), have reached an agreement to retain the Dominion-owned Millstone nuclear facility. The agreement is good news for the region’s grid, the environment, the state’s economy, and ratepayers alike.

March 19, 2019: Credit rating agencies affirm Connecticut is moving in the right direction under the structural reforms in Gov. Lamont’s budget
S&P Global Ratings credit analyst David Hitchcock stated “The outlook change to positive reflects the increased likelihood that Connecticut will preserve recently replenished reserves at what we view as strong levels, and that the state's high debt levels could moderate if the governor's proposal for a new 'debt diet' is carried through into policy." S&P will be monitoring the State of Connecticut to assess whether “…the governor's proposal to shrink future debt issuance might be adhered to over the long run.

April 2, 2019: Chairs first Bond Commission meeting
As part of the “debt diet” initiative Gob. Lamont announced to reduce long-term debt service payments and save state taxpayer dollars, the items to be considered at the April 2 Bond Commission meeting represented a reduction in bonding by more than 65 percent as compared to bonding during the same time-period in prior years. The agenda focused on continuing commitments for municipal aid, critical transportation infrastructure projects, leveraging federal funds for tribute to our veterans, and prior committed economic development projects.