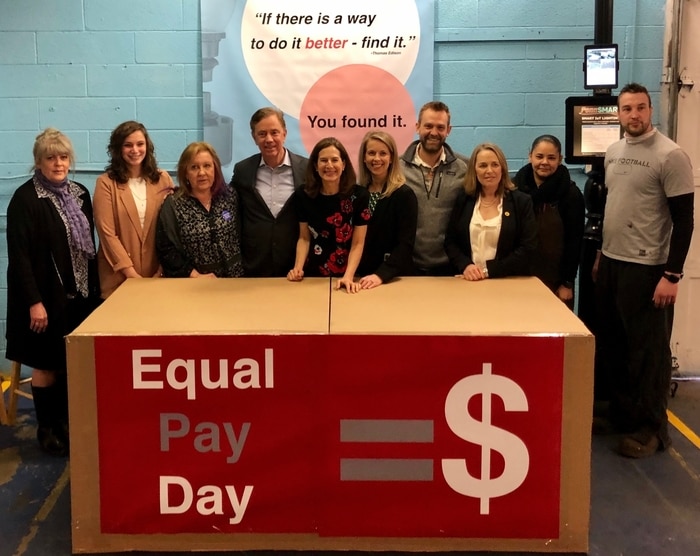 “For far too long, women have been undervalued in the workplace for the work they provide compared to their male counterparts that do the same job – something that can be systemically ruinous, unfair and terrible for our workplace,” Governor Lamont said. “Connecticut has been a leading state in ensuring that our laws protect women, and that includes the right to equal pay for equal work. Closing the gender wage gap is imperative to a stronger state with a stronger economy. I’m proud that our administration has made putting women into leadership positions a priority – half of our state agencies are led by women, which is important not only for changing the culture of our workplace, but toward ensuring that state government reflects the people it represents.”

“Closing the gender pay gap is about more than just lifting up women, it’s about lifting up all Connecticut families and growing our state’s economy.” Lt. Governor Bysiewicz said. “Just last year, Connecticut took an important step toward closing the wage gap with the passage of a pay equity law. We want all women in our state to know that there are protections in place that prohibit employers from discriminating against them in the workplace.”

Equal Pay Day was originated by the National Committee on Pay Equity in 1996 as a public awareness event to illustrate the gap between men’s and women’s wages. In Connecticut, women on average are still earning 83 cents to every dollar compared to their male counterparts – that’s a gap of nearly $11,000 per year. Black and Latina women earn just 63 cents and 54 cents per dollar, respectively, compared to their white male counterparts.

At the beginning of this year, a new law – Public Act 18-8 – went into effect in Connecticut that prohibits employers from asking prospective employees about their previous wages, as evidence shows women disproportionately carry lower salaries from one job to the next.

“I am proud of how far we have come, but recognize that we still have quite a ways to go,” State Senator Christine Cohen, who represents North Branford, said. “Banning pay history inquiries prevents further discriminatory practices and I’m confident we’ll continue to see forward movement as a result of that legislation. Additionally, by highlighting businesses that provide equal pay for equal work, we encourage others to get to the right place because inequality is unacceptable. There is no reason that my daughters shouldn’t receive the same pay rate as my son for comparable work. We must do all we can to ensure that we are fighting for and protecting women’s rights.”

“Penn Globe is committed to supporting equal pay for equal work and we support closing the gender pay gap in the manufacturing sector,” Marcia LaFemina, president of the Pennsylvania Globe Gaslight Company, said. “I believe it is critical that we encourage more girls to study STEM and that we emphasize the need for women to fill the thousands of manufacturing job vacancies in our state.”

Earlier this year, Governor Lamont launched the Governor’s Council on Women and Girls to provide a coordinated state response to issues that impact the lives of women and girls in Connecticut. Chaired by Lt. Governor Bysiewicz, the council is charged with focusing on four areas of impact: education and STEAM; economic opportunity and workforce equity; leadership; and health and safety. Each of the four impact areas affect the financial security of women.