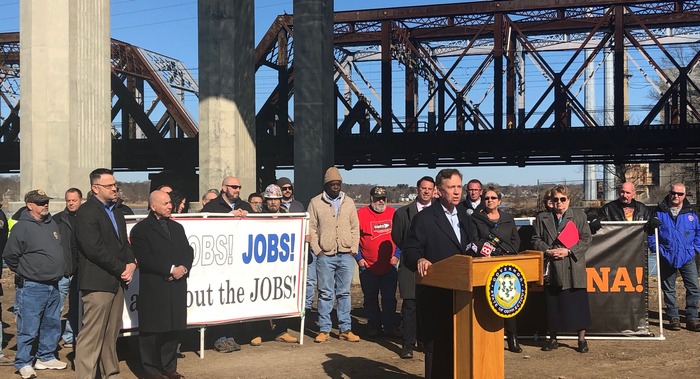 (MILFORD, CT) – Governor Ned Lamont and a group of transportation advocates today joined near the Devon Bridge in Milford to call for increased investments in the state’s aging infrastructure, noting that the 114-year-old bridge is in serious need of replacement and has long surpassed its intended lifespan.

The bridge is an integral component of the Metro-North New Haven Line and Amtrak’s Northeast Corridor and carries about 150 trains per day over the Housatonic River between Milford and Stratford. Built in 1905, it is rated as structurally deficient and in serious condition, which is worse than a poor rating. Recent inspections have shown that the existing steel has widespread rust and corrosion. Last year, emergency work needed to be performed on the bridge’s three high towers, which hold overhead railroad signal and power cables, in order to stabilize them.

The Connecticut Department of Transportation (CTDOT) says that a major rehabilitation or full replacement of the structure will be required in the near future.

“Connecticut is home to the most heavily used commuter rail line in the nation, which thousands of people depend on every day for their commutes to work,” Governor Lamont said. “We have an aging infrastructure in Connecticut that greatly impacts the daily lives of our families and the development of our businesses. Modernizing our infrastructure would employ thousands – it would improve the quality for our residents and advance us towards the state we deserve to be.”

“There are five movable railroad bridges on the New Haven Line – each on a critical link in the Northeast Rail Corridor and each one more than 100 years old,” CTDOT Deputy Commissioner Anna Barry said. “When one fails to close properly, it has an immediate impact on our already tight trains schedules and a ripple effect on the region’s economy. This bridge perfectly illustrates the need for continuous investment in our transportation network.”

The New Haven Line is the busiest commuter rail line in America, and ridership over the last several years has continued to steadily climb. In 2016, it hit a peak with a total of 40.5 million passenger trips during the year, and the numbers have continued to hold steady since.

In his budget address in February, the governor began a discussion with the legislature on returning tolls to Connecticut, which had been removed in 1985. Connecticut is one of only two states on the eastern portion of the country that does not have a system of tolling to support its transportation system.