76-Year-Old Bridge, Which Thousands Depend on for their Daily Commute, is in Serious Need of Repairs 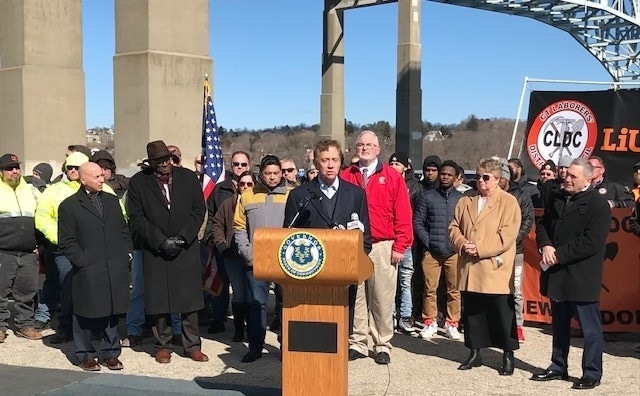 (NEW LONDON, CT) – Governor Ned Lamont today said that the Gold Star Memorial Bridge, which carries I-95 across the Thames River between Groton and New London, is a key representation of why the state needs to be more forward-thinking, strategic and thoughtful about its transportation strategy. The 76-year-old bridge, which thousands of people depend on for their daily commute, has been rated as “structurally deficient” and in “poor condition,” with costs for a rehabilitation project estimated at around $300 million.

The governor, who held an event this afternoon at the Thames River State Boat Launch directly at the foot of the towering, 150-foot-tall overpass where he was joined a number of the region’s local elected officials, said that the bridge serves as a critical artery for southeastern Connecticut, and the rehabilitation project must go forward for the sake of the thousands of residents who utilize it each day.

“Let’s take a look at every vehicle that is driving across that bridge right now, ask ourselves, ‘Where they’re going?’ I have a hunch – hundreds of those drivers are going to the Naval Submarine Base, thousands are going to Electric Boat, and many more are going to the State Pier or are helping develop Connecticut’s emerging off-shore wind industry that will create more jobs in the coming years,” Governor Lamont said. “We have an aging infrastructure in Connecticut and our generation is facing the responsibility of bringing it into the 21st century. For the sake of our businesses and the sake of our jobs, we must not only maintain our roads and bridges, but also develop a modernized transportation system that supports continued growth and attracts new businesses and growth.”

“Fixing our aging and deficient infrastructure is not easy, but it needs to be done, and I appreciate Governor Lamont’s leadership and vision to get us there,” New London Mayor Michael Passero said. “The Gold Star Memorial Bridge is but one example among so many of how vitally important it truly is. With tens of thousands of daily commuters and locally important jobs hanging in the balance at locations like Electric Boat and the Naval Base, and critically important access to the State Pier and the potential growth of jobs in the emerging off-shore wind industry, we need to keep these investments moving forward to protect our economic future.”

The Gold Star Memorial Bridge is the longest bridge in the state at a little over one mile in length. Originally built in 1943, the demand quickly outpaced the capacity, and thirty years later a parallel bridge was constructed to accommodate its sharp rise in use – with the original structure becoming exclusively used for the northbound side of I-95 and the 1973 bridge accommodating the southbound lanes. Combined, the two structures carry eleven lanes of vehicles in addition to pedestrian paths, and average about 106,000 vehicles per day.

The Connecticut Department of Transportation is currently designing a two-phase, comprehensive rehabilitation project of the northbound bridge with construction planned to begin in 2020. The work will include the replacement of support structures, strengthening and replacement of the steel elements of the girder approach spans, replacement of bridge bearings, and finally, the total replacement of the bridge deck. It is anticipated to be completed in 2025.

In his budget address earlier this month, the governor began a discussion with the legislature on returning tolls to Connecticut, which had been removed in 1985. Connecticut is one of only two states on the eastern portion of the country that does not have a system of tolling to support its transportation system.