(HARTFORD, CT) – This morning in a room filled with business leaders at a meeting of the Waterbury Regional Chamber, Governor Ned Lamont announced a proposal to shrink the state’s borrowing by 39 percent, the equivalent of hundreds of millions of dollars annually. Referring to it as a self-imposed “Debt Diet” the Governor is seeking to reduce long-term debt service payments and potentially save the state as much as $2 billion over the next decade.

Between 2012 and 2019, the state averaged approximately $1.59 billion worth of bond authorizations per year. Governor Lamont’s proposed budget will significantly scale that back, bringing annual bond authorizations to $960 million – a reduction of nearly $600 million, or 39 percent.

“We cannot put Connecticut’s future on the credit card,” said Governor Lamont, who will present his budget proposal to the General Assembly on February 20. “The state has had a problem putting costs on Connecticut’s credit card that it simply can’t afford to pay. As we get ready to release a budget that will reshape and stabilize Connecticut’s financial future, it is essential we look at our state’s borrowing and how the size of those future debt service costs will pile onto existing obligations – impacting our future, and our children’s. To trim costs down the road, we have to reduce our bloated capital spending starting right now.”

In order to live within the “Debt Diet,” the Governor and the Office of Policy and Management will adjust and reprioritize the capital budget, which typically includes large scale projects such as school construction and other major infrastructure upgrades. This will not affect any projects currently under construction, and Governor Lamont will continue to make key investments in transportation infrastructure by matching the authorization levels over the last eight years. Governor Lamont will also request new authorizations for municipal projects to serve as catalysts for growth and a stronger investment in information technology to bring the state’s aging IT infrastructure into the 21st century.

The governor, who serves as chairman of the state Bond Commission, has also canceled the January and February scheduled meetings of the group, saying that the state should limit its bonding agenda to critical needs only and at levels that are within the state’s financial ability to pay. 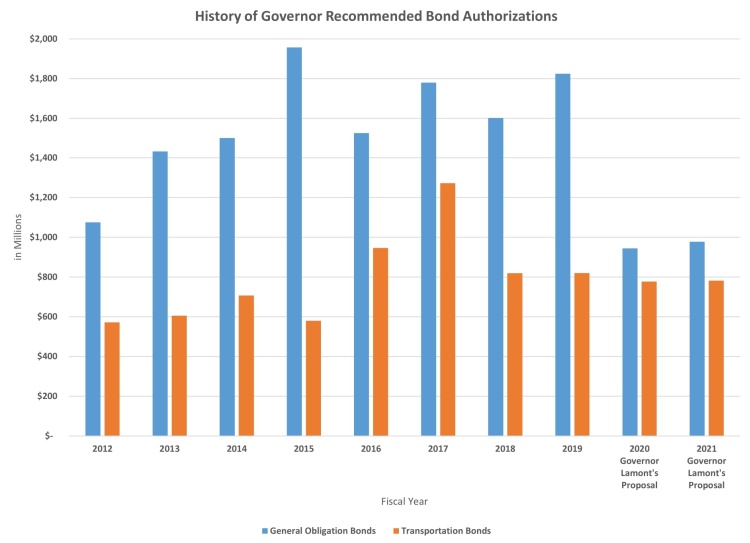