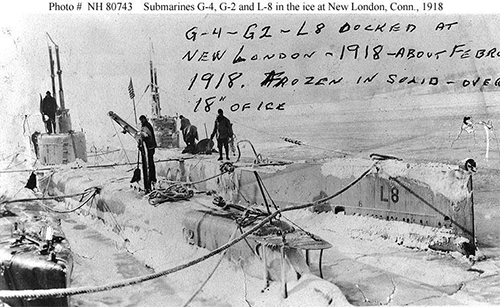 New London — Northeast residents are thawing out from a deep freeze that brought record low temperatures and bitter winds a day after a snowstorm hit the East Coast, dumping a foot of snow on some parts of southeastern Connecticut.

It turns out, 100 years ago, our region also was experiencing severely cold weather.

During the winter of 1917-18, Long Island Sound filled with huge cakes of floating ice that made maritime travel dangerous for weeks. Several steamboats were damaged while plowing through ice fields, and the New London-Groton ferry struggled to operate because ice clogged its docks on both sides of the Thames River.

Much of New London Harbor was covered with ice, leaving vessels lying at anchor cut off from the city.

Twice the temperature in New London dropped to 10 degrees below zero, and Dean's Pond in Stonington froze to an unheard-of thickness of more than 25 inches. Pipes and water meters froze all over the region, and plumbers had a hard time keeping up with repairs.

Making matters worse was a nationwide coal shortage that left the region's coal dealers intermittently unable to fill orders. Homes, businesses and factories often were perilously close to having no heat. The City of New London allowed anyone who needed fuel to cut dead wood in Bates Woods.

The federal government ordered many businesses to close on Mondays to conserve coal, and local dealers anxiously awaited barges delivering a fresh supply. But these often had trouble docking because of the ice.

A search of the daily logbooks for the submarines did not provide much detail on that winter, though on Jan. 29, 30 and 31, the logs for the G-4 state "gunners mates chipping ..."

The photo must have been popular because it was reproduced as a postcard by Bishop Studio in New London, according to Wendy Gulley, archivist for the Submarine Force Museum. The museum has a copy of the postcard. Handwritten on the back it says: "USS G-4, G-2 & L-8 ice and snow bound at the old dock New London, Conn. (1917-1918)."

It's unclear how ice would have been removed from submarines back then. Gulley guessed that sailors might have used shovels and hammers to do the job. Nowadays, in the rare case of ice buildup along the piers, the base's small harbor patrol boats are used to break up the ice. In the case of severe buildup, tug boats have been used.

The G-boats stationed in New London in 1918 were used for training at the Submarine School and for conducting exercises and experiments with new equipment, Gulley said.

During the summer of 1918, the boats also conducted periscope and listening patrols off Block Island during the height of the German U-boat threat along the East Coast. The G-2 was decommissioned on April 2, 1919, after which it was used for testing depth charges and ordnance nets in Niantic Bay. The boat sank off the Waterford coast three months later, on July 30, after suddenly flooding during an inspection by a six-man maintenance crew, three of whom drowned.

The L-8 was part of a division of four L-class submarines organized for service in European waters that reached the Azores on Nov. 7, 1918, four days before the armistice ended fighting in World War I between the Allies and Germany. Upon the signing of the armistice, the submarines returned to the United States and were based in San Pedro, Calif.

Click here for the article as it appears in The Day