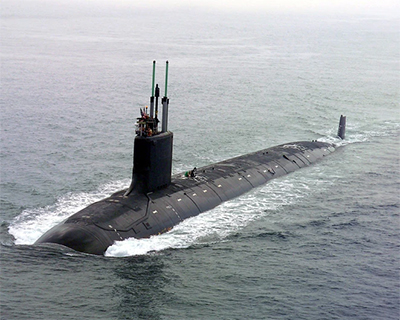 The Navy hopes to increase its current submarine construction op-tempo and build as many as three attack submarines.
The Navy hopes to increase its current submarine construction op-tempo and build as many as three Virginia-class submarines per year to more rapidly address the services’ attack submarine deficit.
The previous status quo had been for the Navy to drop from building two Virginia-Class boats per year to one in the early 2020s when construction of the new Columbia-Class nuclear armed submarines begins. The service then moved to a plan to build two Virginia-class submarines and one Columbia-class submarine concurrently, according to findings from a Navy assessment.
The proposed idea now, currently being explored by the Navy, is to jump up to three Virginia-class per year when Columbia-class production hits a lull in “off years.”
“I do believe there is a capacity to get to three a year in the off years for Columbia construction. We have gotten up to two per year and that is sustainable. There is capacity in the yard and as we negotiate this upcoming multI-year, we will look at pulling options in to add more submarines,” James Geurts, Assistant Secretary of the Navy for Research, Development & Acquisition, told lawmakers at a Congressional House Armed Services Committee Seapower and Projection Forces Subcommittee.
Navy leaders have consistently talked about an expected submarine shortfall in the mid 2020s and that more attack submarines were needed to strengthen the fleet and keep stay in front of near-peer rivals such as Russia and China.
This assessment reinforces findings from a completed comprehensive Navy analysis last year, which found that producing more Virginia-Class attack submarines on a much faster timetable is "achievable" and necessary.
The Navy report, titled The Submarine Industrial Base and the Viability of Producing Additional Attack Submarines Beyond the Fiscal Year 2017 Shipbuilding Plan in the 2017–2030 Timeframe, was delivered to Congress last year, Navy officials said.
The completed study, however, maintained that the Navy and industry can produce two Virginia-Class boats and one Columbia-Class submarine per year, increasing the prior plan by one Virginia-Class boat per year.
The Virginia-Class Submarines are built by a cooperative arrangement between the Navy and Electric Boat, a subsidiary of General Dynamics and Newport News Shipbuilding, a division of Huntington Ingalls Industries.
Each industry partner constructs portions or “modules” of the submarines which are then melded together to make a complete vessel, industry and Navy officials explained.
Virginia-Class Attack Submarine Technology -
Virginia-Class subs are fast-attack submarines armed with Tomahawk missiles, torpedoes and other weapons able to perform a range of missions; these include anti-submarine warfare, strike warfare, covert mine warfare, ISR (Intelligence, Surveillance, Reconnaissance), anti-surface/ship warfare and naval special warfare, something described as having the ability to carry and insert Special Operations Forces.
Future Virginia-Class submarines provide improved littoral (coastal waters) capabilities, sensors, special operations force employment, and strike warfare capabilities, Navy developers said.
Virginia-Class submarines are engineered with this “Fly-by-Wire” capability which allows the ship to quietly linger in shallow waters without having to surface or have each small move controlled by a human operator. With this technology, a human operator will order depth and speed, allowing software to direct the movement of the planes and rudder to maintain course and depth. The ships can be driven primarily through software code and electronics, thus freeing up time and energy for an operator who does not need to manually control each small maneuver, Navy program managers have told Warrior.
Also, unlike their predecessor-subs, Virginia-Class subs are engineered with what’s called a “Lock Out Trunk” – a compartment in the sub which allows special operations forces to submerge beneath the water and deploy without requiring the ship to surface.
Development of Virginia-Class submarines are broken up into procurement “Blocks.” Blocks I and II have already been delivered.
The Block III subs, now under construction, are being built with new so-called Virginia Payload Tubes designed to lower costs and increase capability.
Instead of building what most existing Virginia-Class submarines have -- 12 individual 21-inch in diameter vertical launch tubes able to fire Tomahawk missiles – the Block III submarines are being built with two larger 87-inch in diameter tubes able to house six Tomahawk missiles each, according to Navy data.
Although the new tubes were conceived and designed as part of what the Navy calls its “Design for Affordability” strategy to lower costs, the move also brings strategic advantages to the platform, service officials say. Specifically, this means that the submarines are constructed such that they will be able to accommodate new technologies as they emerge - this could mean engineering in an ability to fire upgraded Tomahawk missiles or other weapons which may emerge in the future, developers said.
The Block III Virginia-Class submarines also have what’s called a Large Aperture Bow conformal array sonar system – designed to send out an acoustic ping, analyze the return signal, and provide the location and possible contours of enemy ships, submarines and other threats.
For Block V construction, the Navy is planning to insert a new 84-foot long section designed to house additional missile capability. “Virginia Payload Modules.”
The Virginia Payload Modules, to come in future years, will increase the Tomahawk missile firepower of the submarines from 12 missiles up to 40.
The VPM submarines will have an additional (approximately 84 feet) section with four additional Virginia Payload Tubes, each capable of carrying seven Tomahawk cruise missiles, for a ship total of 40 Tomahawks.
Click here to view this article as it origninall appeared on the Warrior Maven website.