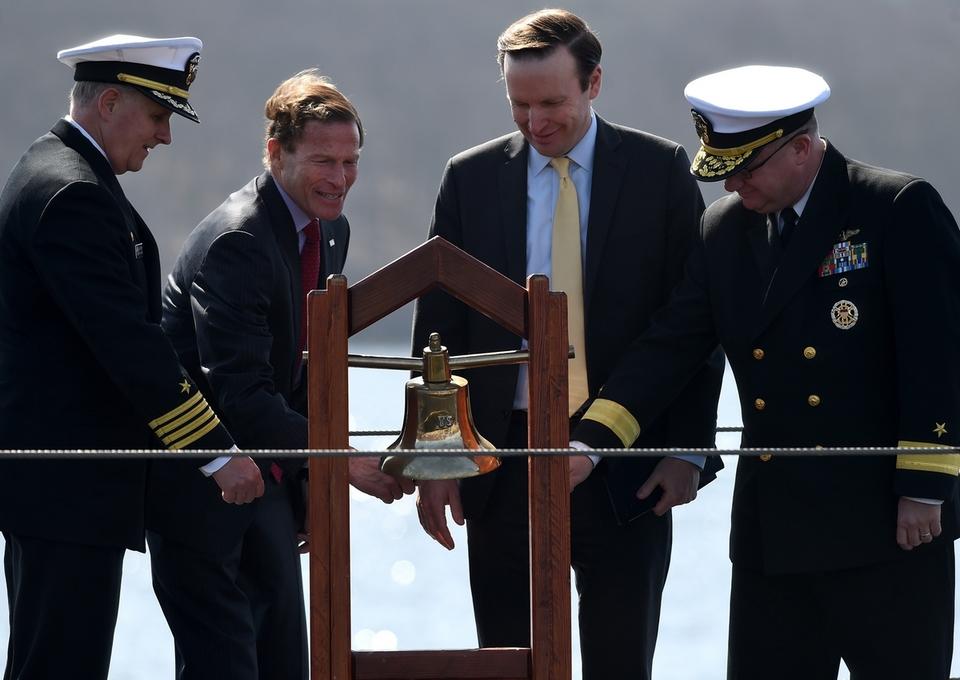 U.S. Sen. Richard Blumenthal, second from left, rings the bell while he and Capt. Paul
Whitescarver, Commanding Officer of Naval Submarine Base in Groton, left, Sen. Chris Murphy,
second from right, and Rear Adm. James Pitts, right, Commander of the Undersea Warfighting
Development Center, ring in the new year for the submarine force at the end of a ceremony
celebrating the force's birthday aboard the USS Nautilus at the Submarine Force Museum in
Groton on Tuesday, April 11, 2017. Blumenthal and Murphy announced a congressional resolution
to declare April 11 as "National Birthday of the U.S. Navy Submarine Force" during the ceremony.
(Dana Jensen/The Day)
Groton — From one to 70.
That's one measure of how far the submarine force has come.
Tuesday marked 117 years since the Navy purchased its first submarine, the USS Holland (SS-1), a 64-ton, 53-foot-long, 10¼-foot-diameter experimental submarine from John P. Holland and the Holland Torpedo Boat Co.
Since then, submarines have become larger, faster and considerably more capable, said Lt. Cmdr. Reginald Preston, officer in charge of the Historic Ship Nautilus, where Tuesday's celebration took place.
"I might add that they cost quite a lot more than the $150,000 that we spent to buy Holland 117 years ago," Preston said. 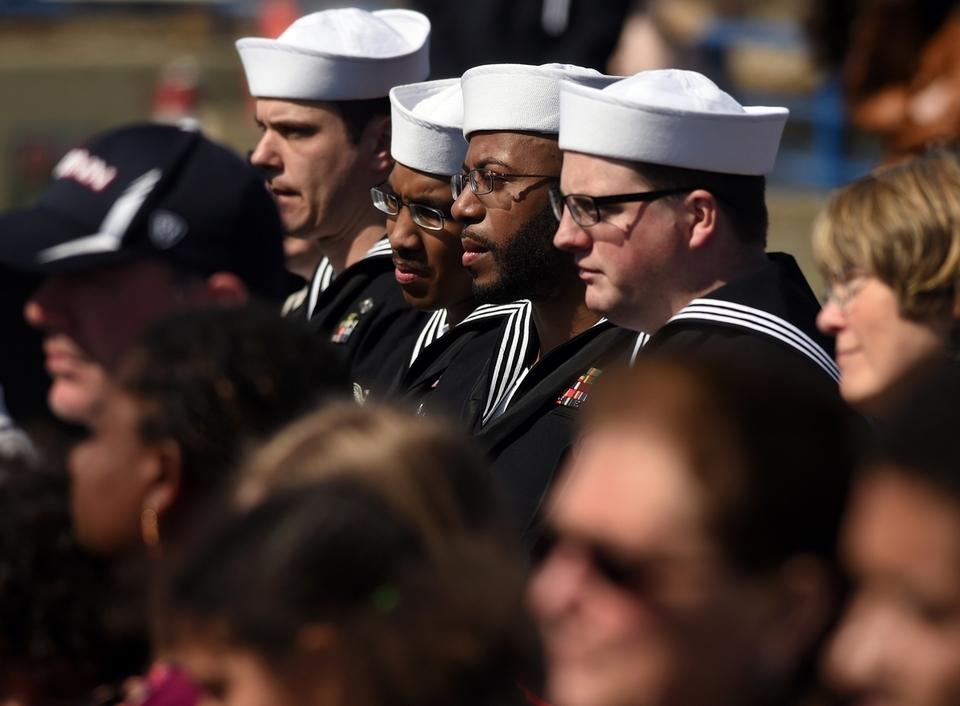 Audience members listen to one of the speakers during a ceremony celebrating the birthday
of the U.S. Navy Submarine Force aboard the USS Nautilus at the Submarine Force Museum
in Groton on Tuesday, April 11, 2017. U.S. Sens. Richard Blumenthal and Chris Murphy, both
D-Conn., announced a congressional resolution to declare April 11 as "National Birthday of
the U.S. Navy Submarine Force" during the ceremony. (Dana Jensen/The Day)
An attack submarine today costs nearly $3 billion, and the new ballistic-missile submarines are expected to cost about $8 billion a pop.
Today's submarine force includes:
• 52 attack submarines; 15 of which are based in Groton.
• 14 ballistic-missile submarines.
• Four guided-missile submarines.
That's a total of 70 submarines, which are manned by 88 submarine crews.
Last year was a busy year for submarine crews in Groton. In 2016 alone, five submarines — USS Springfield (SSN 761), USS San Juan (SSN 751), USS Virginia (SSN 774), USS New Hampshire (SSN 778) and USS Dallas (SSN 700) — returned from deployments, according to  Cmdr. Paul Whitescarver, commanding officer of the Naval Submarine Base.
Three submarines — USS New Mexico (SSN 779), USS Hartford (SSN 768) and USS Missouri (SSN 780) — currently are deployed.
Tuesday also marked an anniversary for the sub base, which began as a naval yard and storage depot on April 11, 1868. 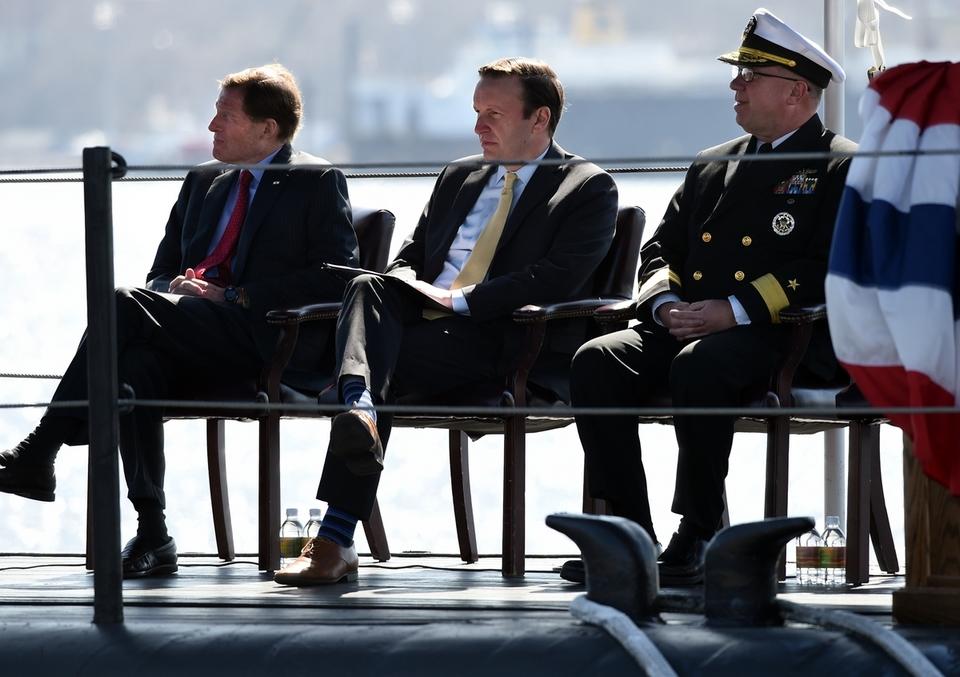 U.S. Sens. Richard Blumenthal, left, and Chris Murphy, center, both D-Conn., and Rear Adm.
James Pitts, right, Commander of the Undersea Warfighting Development Center, listen to
one of the speakers during a ceremony celebrating the birthday of the U.S. Navy Submarine
Force aboard the USS Nautilus at the Submarine Force Museum in Groton on Tuesday,
April 11, 2017. (Dana Jensen/The Day)
Now, the base is home to 6,500 military personnel, and more than 70 tenant commands, including the Naval Submarine School and the Undersea Warfighting Development Center, which oversees the training, assessment and tactical development and analysis of the Navy's undersea fighting capabilities.
Rear Adm. James Pitts, who heads the center, also spoke at Tuesday's event. He pointed to the advancements in technology in the submarine fleet, and the attempts by adversaries to use technology to challenge U.S. undersea superiority. He said "alliances" with companies and contractors in Groton have helped to advance submarine technology.
Meanwhile, there's talk of a bigger Navy, including more submarines.
President Donald Trump has proposed a 350-ship Navy and has said he wants to build more submarines for less money. The Navy's newest force structure assessment calls for 355 ships, including increasing the number of attack submarines from 48 to 66.
Following that announcement, acting Navy Secretary Sean Stackley submitted an accelerated fleet plan on behalf of the Navy, which proposes an additional 29 ships, including three additional attack submarines, over the next seven years. Instead of building 13 attack submarines, the Navy would build 16 during that time.
The plan would require more than $60 billion in extra spending.  The biggest investment, by far, would be in submarines, which "shows this is a priority that far surpasses almost all of the other ships that are part of the plan," U.S. Rep. Joe Courtney, D-2nd District, said Tuesday.
U.S. Sen. Richard Blumenthal, D-Conn., referenced the memo in his remarks Tuesday, saying those submarines are needed to reach the minimum level needed to keep "our fleet as strong as it must be."
The number of attack submarines will fall below the Navy's requirement of 48 in 2025, and reach a low of 41 in the 2030s. The current requirement for attack submarines is 48 and has not been increased since 2004. The Navy now is suggesting it needs 66 attack submarines.
Blumenthal and U.S. Sen. Chris Murphy, D-Conn., have introduced a resolution in the Senate to make the submarine's birthday an official day of remembrance.
The point is to "help tell this story over and over again about what we make and what we power here, and how it matters to everyone in this country, no matter where you live," Murphy said.