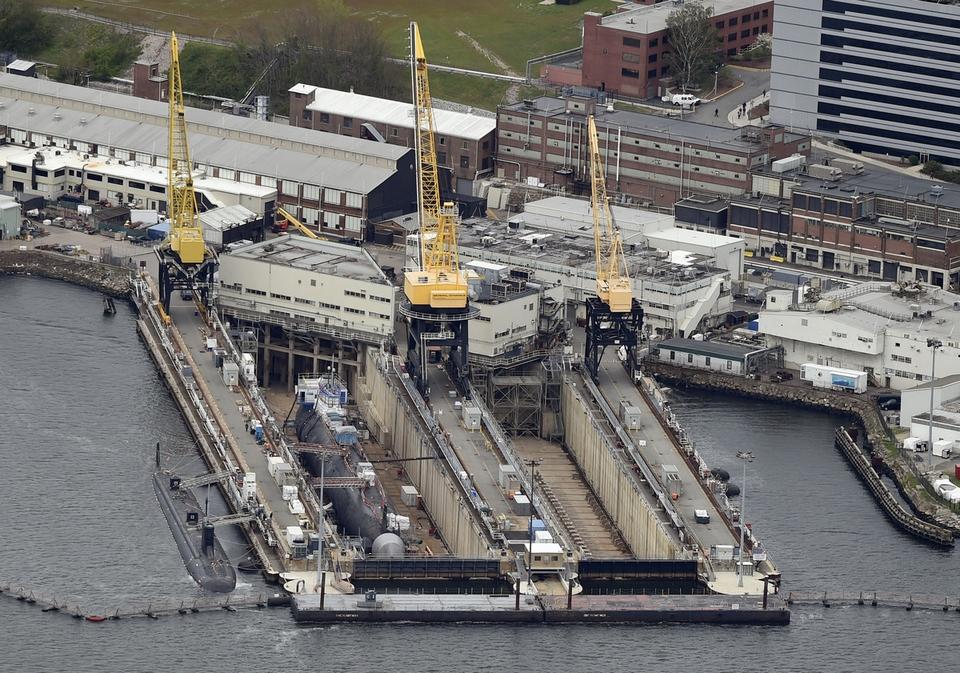 This May 2016 Day file photo shows an aerial view of General Dynamics Electric Boat in Groton. (Sean D. Elliot/The Day)
A new report calls attention to Connecticut's role in helping its defense industry going forward.
The release of the report purposefully coincides with ongoing budget deliberations in the General Assembly, where state lawmakers, facing a $1.7 billion deficit, will have to make tough choices about what to cut, said Scott Bates, who commissioned the report several months ago when he was still the head of Connecticut Institute for the 21st Century, or CT21, a nonprofit organization of business and civic groups.
"At a minimum, we want to make sure funds (for education and training programs) aren't cut," said Bates, who is now deputy secretary of the state. "At a maximum, we want to double down on these important investments."
The report was researched and written by Loren Dealy Mahler, a senior fellow with CT21 who has extensive experience with the National Security Council and Department of Defense.
The report makes a number of recommendations, from increasing industry input into workforce development programs to taking steps to improve the quality of life for residents statewide.
Connecticut is home to submarine builder Electric Boat, jet engine manufacturer Pratt & Whitney, and Sikorsky, which builds helicopters. All three of these defense contractors have aging workforces and will need to hire large numbers of employees to replace those retiring, as well as to carry out increased workloads.
At EB, for example, 35 percent of employees are within 10 years of retirement. At the same time, the company is in talks with the Navy about building three, maybe even four, submarines a year.
A less experienced and younger workforce requires more preparation, said John Beauregard, president of the Eastern Connecticut Workforce Investment Board.
"As a state we have to have a clear strategy that prepares not only adult workers who are changing careers, but also reaching down into our middle schools and high schools," he said.
Beauregard's group has helped to set up a manufacturing pipeline in southeastern Connecticut to train workers. Ninety-two percent of graduates have gone on to be employed, mainly at EB, which has helped to develop the curriculum.
"For us, the prototype has been built," Beauregard said. "Now it's a question of sustaining it."
The pipeline program is funded through federal grants, and classes are expected to go until early 2018 under current funding levels.
The CT21 report recommends that existing training programs be expanded and new ones be created. There also will be increased demand on the more than 1,000 defense suppliers in the state, and those suppliers will need skilled workers as well, the report points out.
Chris McClure, spokesman for Gov. Dannel P. Malloy's budget office, said in a statement that Connecticut has made "historic investments to ensure that the jobs of tomorrow will be here — whether at Sikorsky, (United Technologies Corp.), Electric Boat or one of the thousands of advanced manufacturing suppliers in Connecticut — and that those employers will have a skilled workforce grown in state."
EB received a $10 million loan from the state in October 2014 to purchase and upgrade property previously owned by Pfizer. In 2015, state lawmakers approved a deal to provide United Technologies with up to $400 million in accumulated state tax credits in exchange for a commitment to keep its Pratt and Whitney headquarters in the state for 15 years and invest up to $500 million in capital improvements over five years.
Partnerships between the defense industry, educational institutions, the state and local communities will be required to execute the recommendations in the report, said Bob Ross, executive director of the state's Office of Military Affairs, who was contacted by the author of the report early on.
The biggest takeaway, Ross said, is the need for the state to have a long-term strategy with regards to its defense industry.
The high-quality jobs provided by the defense industry have attracted new workers to Connecticut. As for keeping those workers here, the report recommends that the state invest in a public relations campaign to promote the local communities where these defense jobs are located. It also suggests a focus on mixed-use development to attract younger workers "looking to combine multiple aspects of the community into one convenient geographical area."
The manufacturing industry often is portrayed as a "dark, dirty and dangerous place where your grandfather used to work," the report says. To combat that perception, the state's newly established Manufacturing Committee should promote the industry similar to how the technology industry in Silicon Valley is portrayed as an innovating and exciting place.
The report also suggests that the state provide a variety of incentives to those not well represented in the manufacturing industry, such as women and minorities. It specifically mentions dedicated scholarships, fellowships and loan forgiveness programs.