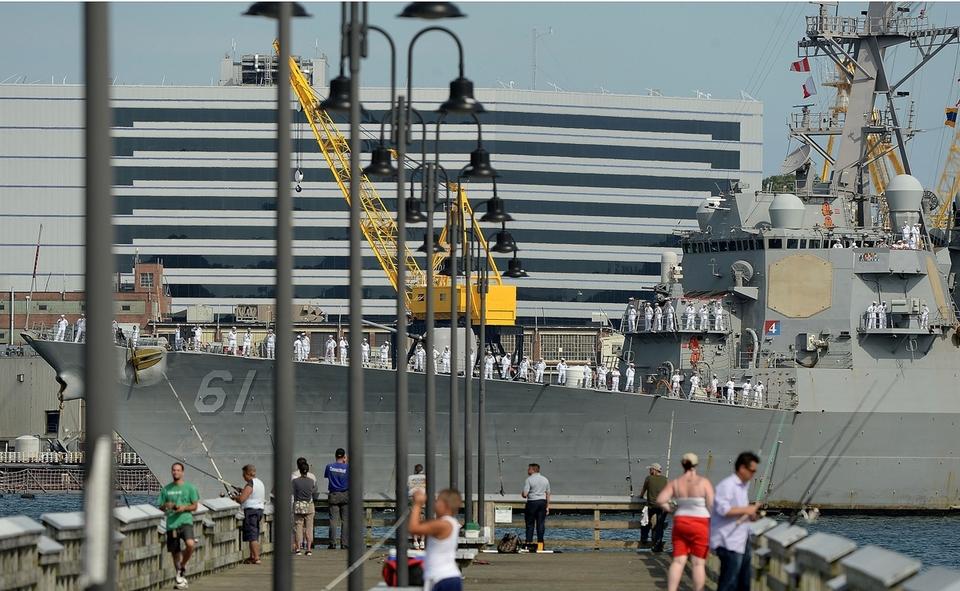 The USS Ramage passes the fishing pier en route to dock at Fort Trumbull State Park in New London,
Conn., on Sept. 8, 2016. The Arleigh Burke-class guided missile destroyer docked in New London for
the Connecticut Maritime Heritage Festival last year. (Sean D. Elliot/The Day)
New London — Seventeen years ago, the city’s ship(s) came in.
OpSail 2000 commandeered the newly refurbished waterfront for four days in July, with dozens of tall ships luring crowds estimated in the hundreds of thousands. Then-Gov. John G. Rowland anted up $6 million for the event.
Organizers returned $1.4 million unspent, John Johnson, the OpSail Connecticut chairman, recalled Wednesday.
Those were the days.
OpSail’s direct descendant, the three-day Connecticut Maritime Heritage Festival, returns to New London this weekend for the fifth consecutive year (it started as the Connecticut Schooner Festival in 2013, after another OpSail in 2012), its belt tighter than ever. After winning state grants of $170,000 in 2015 and $60,000 last year, festival organizers are solely relying this time on sponsorships and private donations, which they're still happily accepting.

The schooners, from left, Mary E., Mystic Whaler, Columbia, Brilliant and When and If race away from the starting
line for the Connecticut Maritime Heritage Festival schooner race Sept. 12, 2015. The event returns Sunday during
this year's festival. (Sean D. Elliot/The Day)
The Connecticut Municipal Electric Energy Cooperative is the title sponsor.
“We’ve cut back on promotion and appearance fees (for privately owned ships), and we’re hoping to raise $50,000,” Johnson said. "We think this is going to be the biggest festival yet in number of ships and turnout."
The Naval Submarine Base is providing a huge tent at City Pier, shouldering one of the festival’s major expenses.
Ships are scheduled to begin arriving early Friday.
The star of this year’s festival figures to be the USS Cole, the Arleigh Burke-Class guided-missile destroyer attacked by suicide bombers during an Oct. 12, 2000, refueling stop in Yemen. Severely damaged in the attack that claimed the lives of 17 of its crew and left 39 more injured, the ship was repaired and returned to service. 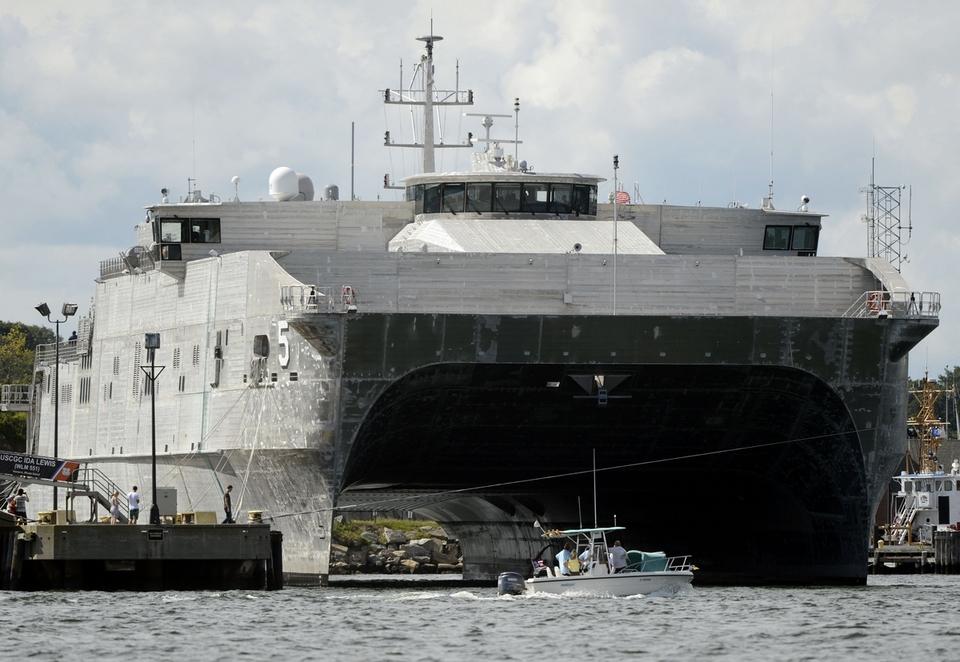 Boaters get a look at the USNS Trenton (JHSV-5) docked at Pier 7 at Fort Trumbull State Park for
the Connecticut Maritime Heritage Festival on Sept. 12, 2015. (Sean D. Elliot/The Day)
It recently completed a seven-month deployment to the Middle East.
“If the response we’ve gotten on social media is any indication, a lot of people have a special place in their heart for the Cole,” said Bruce MacDonald, the festival's chief operating officer. A post about the ship on the festival’s Facebook page drew more than 2,000 “likes.”
While the Cole’s exact arrival time is not being made public, Gov. Dannel P. Malloy is scheduled to formally welcome the vessel at 12:30 p.m. Friday in a ceremony at Pier 7 of Fort Trumbull State Park. At the ceremony, Malloy also will greet the crew of the U.S. Coast Guard cutter Thunder Bay, which is expected in New London at 7 a.m. Friday.
Following the ceremony, the ships will be open for tours.
Other top attractions promise to be the Kings Pointer, the U.S. Merchant Marine Academy’s 176-foot training vessel, due to arrive Saturday; and the schooners Columbia, Mystic Whaler and Brilliant.
Organizers are instituting a new system to alleviate long lines for the tours, MacDonald said. Visitors can obtain a ticket with the specific date and start time of a tour and return 30 minutes before the tour to undergo security screening.
“We heard the complaints about the lines to tour the Ramage last year and we did something about it,” MacDonald said.
The USS Ramage, a destroyer, was the standout of the 2016 festival. The year before that, it was the USNS Trenton, a hulking, two-hulled vessel.
“It’s standard for the Navy to be here (at the festival)," Johnson said. "It’s a tradition, and this year, especially, it’s a life-saver for us.”
MacDonald said it would have been difficult to pull off this year’s festival without the help of Capt. Paul Whitescarver, commanding officer of the Submarine Base, and Capt. Andrew Tucci, commander of New Haven-based Coast Guard Sector Long Island. They were instrumental in helping the festival line up military vessels, including the Cole.
It helped, Johnson said, that New London has gotten a reputation for appreciative audiences.
The festival will include another edition of The Great New London Chowder Challenge, with more than a dozen restaurants, the Whaler Café at New London High School and the chefs of the Cole and the Thunder Bay expected to enter the competition. In another return engagement, the Oliver Hazard Perry, a 200-foot sail-training vessel homeported in Newport, R.I., will take students from New London, Groton and Ledyard on a five-day sail-training cruise to Newport.
In a first for the event, the Coast Guard will stage a search-and-rescue demonstration on the Thames River at 1 p.m. Saturday. On Sunday, the schooners will race.
The Thames River Heritage Park water taxi will operate during the weekend before concluding its second season the following weekend. The service connects Fort Trumbull to the New London waterfront and Fort Griswold in Groton, and runs from 10 a.m. to 9 p.m. Friday through Sunday.