State Official: Sub Base In Good Position As Pentagon Pushes For BRAC
By Julia Bergman
March 4, 2016
The Day 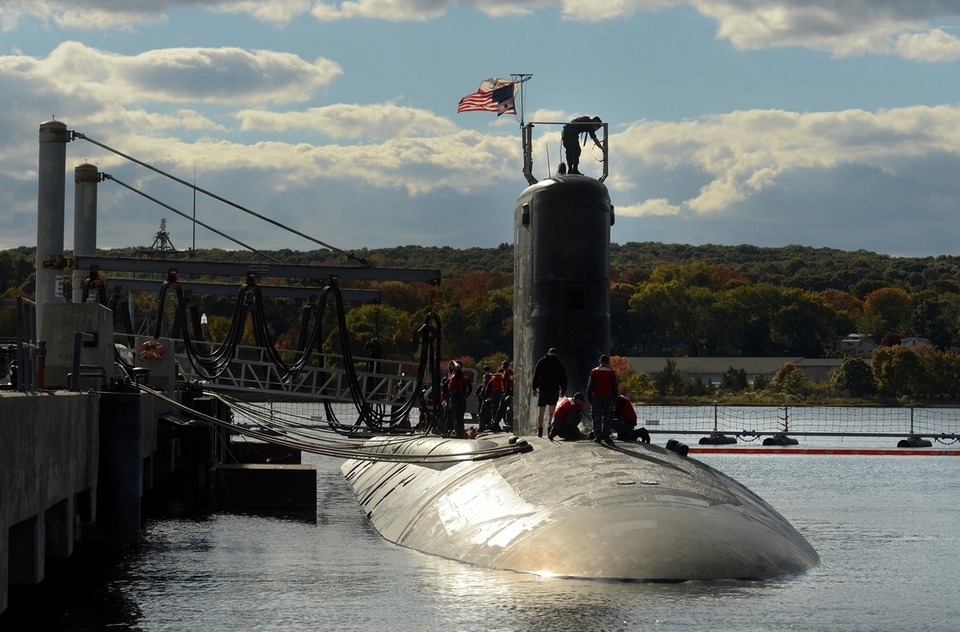 The Virginia-class, fast attack submarine USS California (SSN 781) ties up at the pier at
U.S. Naval Submarine Base New London after returing from deployment Friday Oct. 16, 2015.
The California's return coincides with the 100th anniversary of the first submarines to arrive
in Groton. (Tim Cook/The Day, file)
Over the past several years, Pentagon officials have pushed for another round of base closures and consolidations, and have said they will continue to do so until Congress approves.
This year is no different.
The Pentagon is renewing its call for a new Base Realignment and Closure round, which, if approved, would happen in 2019.
The arguments on both sides essentially remain the same.
Federal lawmakers maintain upfront costs for BRAC are too high, and defense officials say the need to identify efficiencies and re-examine the alignment of their bases warrant another BRAC round.
"Nothing has really changed," said Bob Ross, executive director of the Connecticut Office of Military Affairs set up to defend the Naval Submarine Base in Groton against future BRAC rounds.
The Department of Defense has 20 percent extra infrastructure, according to recent testimony from Pete Potochney, assistant secretary of defense in charge of energy, installations and environment.
Air Force and Army officials have said for years that they have a "tremendous excess" in infrastructure, Ross said, at 30 percent and 18 percent, respectively.
The Navy's position is that "they've got things about right," Ross said. "The Navy would participate (in another BRAC round) just as a review of where they are, but they don't anticipate significant closings."
Ross recently met with Steven Iselin, principal deputy assistant secretary of the Navy in charge of energy, installations and environment, who conveyed the Navy's stance on BRAC to him during a conference of the Association of Defense Communities.
If there were a BRAC in 2019, the Pentagon first would need to name a commission and put a staff in place, which "all takes a great deal of time," Ross said.
The commission would then go line by line through a Pentagon proposal of what should be closed and what should be realigned.
The commission would then produce its own report, which may or not match the Pentagon proposal.
Sometimes during the BRAC process, certain bases can get larger instead of smaller, Ross said.
In 2005, the defense department recommended combining 26 installations into 12 joint bases.
The department initially estimated that would save $2.3 billion, and later reduced the estimate to $273 million.
The savings from BRAC don't kick in until years down the line.
Projected savings for the 2005 BRAC is about $4 billion annually, but the defense department won't "recoup its up-front costs until 2018," according to a report from the Government Accountability Office.
Potochney testified that a new BRAC round would be "efficiency focused" and "save about $2 billion a year after implementation."
The original estimated cost of executing the 2005 BRAC was about $21 billion, but it actually ended up costing about $35 billion.
Ross said the much higher cost "left a little bit of anxiety in the minds of Congress," and lawmakers repeatedly have refused requests for another BRAC round.
One major change from 2005 is that the sub base is in a better place today than it was then when it faced closure then, according to Ross.
"You can never say that you're absolutely sure it could never happen again, but I know the base is in a better place," he said.
Ross cited several reasons for this, including the greater emphasis on submarines in the country's national security strategy.
The Navy has indicated that the Virginia-class and Ohio-replacement class submarine programs are top funding priorities.
"Back in 2005, the aircraft carrier battle group was a pre-eminent feature of Navy power projection. But the world has changed since then," Ross said. "Submarines have really come into their own in terms of all the different missions they're capable of performing."
The recent establishment of the Undersea Warfighting Development Center to examine anti-submarine warfare across the Navy also helps protect the base, according to Ross.
The new command brought back a flag officer to the base, which it lost when Submarine Group 2 was disestablished in August 2014.
The UWDC is operating in the same building where Group 2 was headquartered.
Group 2 didn't have a significant operational role, according to Ross, who said its role was more about administrative and maintenance oversight.
The UWDC is different in that it is a "global command," he said. "It looks at undersea warfare development for the entire Navy."
The base as a whole produces 15,000 jobs, and has an economic impact of $5 billion annually to Connecticut's economy, according to Ross.
The state has made "modest investments" in various infrastructure projects on the base to demonstrate its partnership with the Navy, Ross said.
It has spent $14 million of the $40 million that was set aside by the General Assembly in 2007 for infrastructure improvements on the base.
Secretary of the Navy Ray Mabus recently accepted the state's latest project offers: security improvements related to a commercial railroad that runs through the base and continued development of an electricity microgrid.
Why does the state contribute to a federally funded installation?
"With sequestration and the Budget Control Act, the defense department is really constrained financially to meet all its obligations," Ross said.
When the department doesn't have enough money to do everything it wants, it tends to shift money toward the operational forces so the "tip of the spear remains sharp," he added.