Panel: Sub Base Positioned Well Against BRAC 'Noise'
The Bulletin
By Ryan Blessing
May 4, 2016 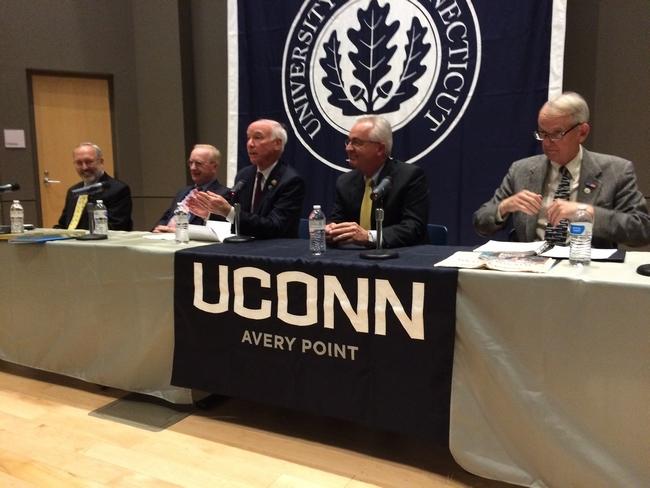 Ryan Blessing/NorwichBulletin.com
Groton Town Manager Mark Oefinger, Chamber of Commerce of Eastern Connecticut President
Tony Sheridan, U.S. Rep. Joe Courtney, Robert Ross and Stonington First Selectman Rob
Simmons were part of a panel that discussed the Base Closure and Realignment Commission
efforts to close Naval Submarine Base New London in 2005 Wednesday at the UConn Avery
Point campus.
GROTON – Lessons learned when the Naval Submarine Base New London was threatened with closure in 2005 have positioned it to better withstand future attempts by the Navy to shut the base down, those who fought to keep it open said Wednesday.
The sub base discussion was part of Surviving BRAC, a forum held at the University of Connecticut’s Avery Point campus, and organized by libraries in Eastern Connecticut.
The Base Closure and Realignment Commission, known as BRAC, is a process the government uses to evaluate military bases and recommend closure of bases that are no longer deemed efficient or necessary.
In the last BRAC round in 2005, the Pentagon targeted the Groton base for closure, but the BRAC commission in August 2005 voted 7-1 in favor of striking it from the list.
Wednesday’s forum included U.S. Rep. Joe Courtney, D-2nd District; former Congressman Rob Simmons, who now serves as Stonington’s first selectman; Mick O’Beirne, co-chairman of local BRAC efforts in 2005; Connecticut Office of Military Affairs Executive Director Robert T. Ross; Chamber of Commerce of Eastern Connecticut President Tony Sheridan; Town of Groton Town Manager Mark R. Oefinger; and Gabriel Stearn of the Connecticut Municipal Electric Energy Cooperative, who was part of the BRAC coalition in 2005.
Former Bulletin opinion page editor Ray Hackett was the panel’s moderator. Hackett covered previous BRAC rounds in the 1990s and in 2005, when the BRAC recommended closing the Groton base.
The topic is a timely one, Hackett said.
“There’s already noise being made in Washington about another BRAC round,” he said.
Courtney said there have been five requests to the current Congress to perform a BRAC, with four already rejected and a fifth looking unlikely to be approved.
Political timing is playing into the decision not to convene a BRAC round, he said.
“Basically it’s not fair to have a BRAC moving forward when you have a brand new president and secretary of defense,” he said.
The military also hasn’t been able to show that the previous BRAC in 2005 managed to reduce overhead, Courtney said.
“It still has not saved a single penny to the American taxpayer, and we’re talking 11 years now,” he said.
The panelists agreed, however, that another BRAC that targets Naval Submarine Base New London seems inevitable, and that a strong, coordinated and focused approach would be needed to fend off closure.
“One of the amazing things about 2005 was that we put together Team Connecticut and pointed out the base did have military value, and that the process itself was rigged,” Simmons said.
He said he’s certain the BRAC will again target the local base.
“We’ve got to be absolutely on board as a team to fight it,” he said.
Ross, a Salem resident, called the base an asset to not only Connecticut, but also Rhode Island and Massachusetts.
“We all know the benefit – 30,000 jobs and $7 billion to the state’s economy,” he said.
The base has modernized since 2005, taking down old, inefficient buildings and providing room for expansion.
“We should never let our guard down, but should be very proud of the progress we’ve made,” he said.
Sheridan said area businesses and chambers of commerce have a very different relationship with the Navy now than in 2005 when the base was threatened.
The chamber now has a military affairs committee that maintains strong ties with the Navy community and Electric Boat, he said.
Oefinger said local officials are looking at ways to better promote the base.
“A number of us have been in discussion with DOT about issues like signage,” he said.
O’Beirne agreed that the base is still at the mercy of the commission, despite the natural synergy that exists between the base and area industry, particularly submarine builder Electric Boat.
“We all know the benefit of having Electric Boat down the road,” O’Beirne said. “(In 2005) we had no way to quantify it in numbers to the military, but they understood it.”
Simmons said part of what was critically important to saving the base in 2005 was community support.
“Everyone felt that this is their base,” he said. “The support was overwhelming.”