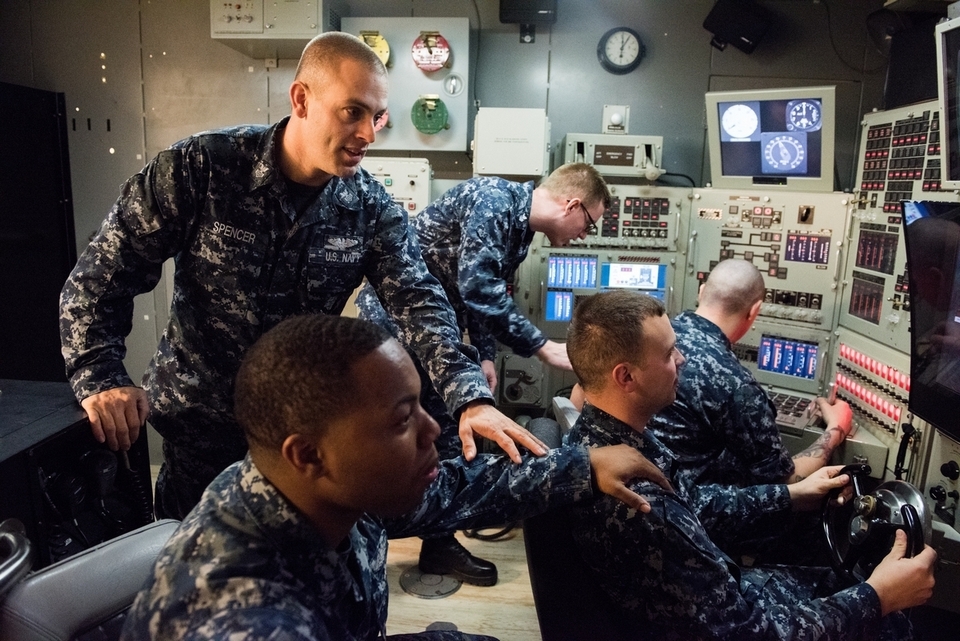 Petty Officer 1st Class Heath Spencer, left, and Petty Officer 1st Class Nicolas Cusack, back
middle, give instructions to sailors in the control room of the Ship Control Operations Trainer
on Thursday, April 7, 2016. Spencer and Cusack supported the crew of the USS Hartford in
preparing for a recent Arctic exercise. (Shelly Yang/The Day)
Groton — Remember that video of the USS Hartford breaking through an icepack and surfacing in the Arctic Circle?
Instructors at the Naval Submarine School played a part in making that happen.
The Groton-based submarine was one of two Los Angeles-class attack submarines that participated in Ice Exercise 2016, a biennial exercise in the Arctic Circle that provides an opportunity for the submarine force to practice operating in that challenging environment, and to further scientific research in the region.
Hartford crew members prepared, in part, by using trainers that simulate various operational environments.
One of the trainers they used—a replica of the ship control station onboard a Los Angeles-class submarine—relies on a series of hydraulic lifts combined with software to simulate various sea conditions and the feelings of diving and surfacing.
The density, salinity and temperature of Arctic water is different from those of waters in other parts of the world, and the trainer's software can simulate the impact that harsh environment has on a submarine.
As one might imagine, surfacing through ice requires complex maneuvering.
A Los Angeles-class submarine can break through up to 6 feet of ice. Before breaking through, crews must find the thinnest point.
"Then we have to learn how to hover and stop," said Master Chief Jesse Cook of the Advanced Readiness and Training Department at the submarine school.
"No motion. You have to be completely still in the water to be able to surface safely," he said. "You've got 130 crew members on board. You have a billion-dollar submarine you have to get through safe. That's where the training really comes into play."
Water is pumped off the boat so it becomes positively buoyant to surface vertically.
A certain angle needs to be maintained to avoid damaging the front of the boat, and to allow maximum force to break through the ice.
Air is blown into the sub's ballast tanks to add further force.
"They don't want it to be too fast. They don't want it to be too slow," said Electronics Technician (radio) Petty Officer 1st Class Heath Spencer, instructor for the ship control trainer.
"Too fast, the angle of the ship might get excessive and the bow of the ship will hit the ice and it could break," he said. "And then if we're going too slow, we'll hit the ice and we'll never get through it."
The trainer can simulate operating under ice, going too fast and even making the ice too thick to break through.
It also enables sailors to practice responding to various emergency situations, such as ice that is too thick or a shift in the boat's position at a crucial moment.
"We teach them how much water to bring on to make the ship negatively buoyant again to get back down," Spencer said.
Hartford crew members also practiced on the Ship Navigation and Piloting Trainer, a mockup of a control room on a Los Angeles-class submarine.
"We're training for the worst case scenario," said Electronics Technician Petty Officer 1st Class Nicolas Cusack, instructor for the trainer.
In the Arctic, that includes getting lost. 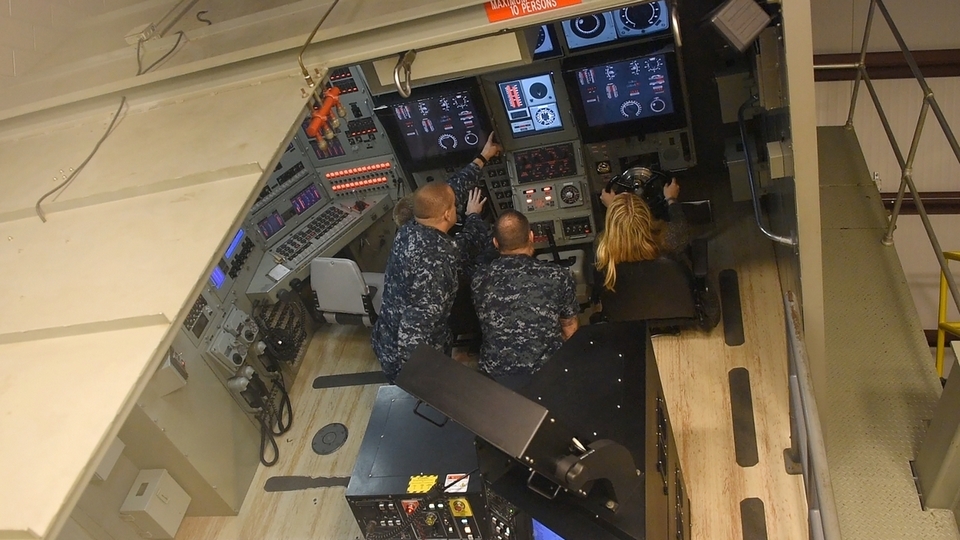 An overhead view of the Ship Control Operations Trainer, which was used in the training of
the USS Hartford crew before the submarine made its recent trip to the Arctic. (Shelly Yang/The Day)
Territorial waters not belonging to the U.S. surround the Arctic Ocean, and U.S. submarine crews don't want to enter them unintentionally.
Through the trainer, they practice navigating in the Arctic's unique environment and tackling the challenges of operating near the North Pole.
"The further north you go, as the lines of longitude come closer together, the systems start to have trouble operating," Cusack explained.
The simulators are only a small portion of training resources the 130-member Advanced Readiness and Training Department oversees.
The department's instructors are hand-selected by senior enlisted officials in the Navy based on their experience and expertise.
Spencer, 34, has been in the Navy for 14 years, and Cusack, 30, has been in for six.