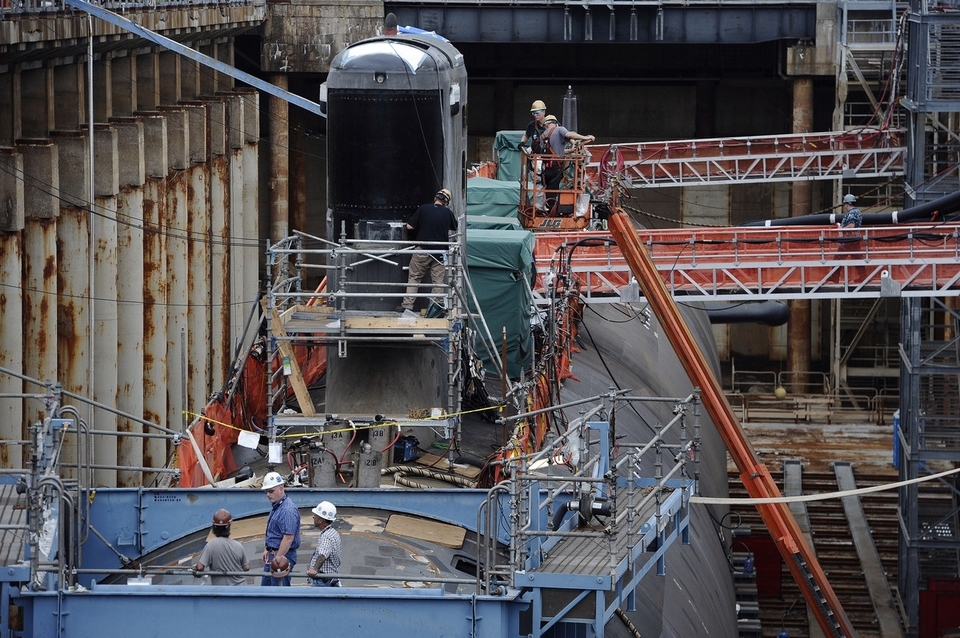 In this Thursday, July 30, 2015 photo, shipyard workers at General Dynamics Electric Boat
prepare the submarine Illinois for float-off in Groton, Conn. The U.S. Navy is using a new
painting process and dozens of other innovations aimed at reducing the maintenance needs
for attack submarines, which are coming out of service faster than they can be replaced.
(Jessica Hill/AP Photo, file)
Federal lawmakers are directing the Navy to assess whether the industrial base, namely Electric Boat and its shipbuilding partner, Newport News, can sustain a two-a-year production rate of Virginia-class attack submarines over the next 13 years.
Under current plans, 21 Virgina submarines will be built from 2017-30. Lawmakers are asking the Navy to look at the possibility of building 28 during that timeframe.
The 2017 National Defense Authorization Act, passed by the U.S. House Armed Services Committee early Thursday, directs the Navy to submit a report to congressional defense committees by March 1, 2017.
The report is to include:
Today, the Navy's fleet of attack submarines consists of 52 boats; its strategic requirement is 48.
Under the Navy's 30-year shipbuilding plan, the number of attack submarines will fall below the Navy's requirement in 2025, and reach a low of 41 in 2030.
Meanwhile, several top-ranking Navy officials have testified in Congress in recent months that the U.S. needs more attack submarines.
They've pointed to a shortage of submarines in the Asia-Pacific, the strain on the submarine force given current demands on undersea warfare, and increased submarine activity by Russia and China.
Bryan Clark, a senior fellow with the Center for Strategic and Budgetary Assessments, said that falling below the requirement of 48 attack submarines, put in place in 2010, could mean "some of the intelligence gathering or crisis response type missions don't get done. It could result in gaps in intelligence."
Current Navy plans call for building one Virginia-class boat each year that an Ohio-class replacement submarine is built, starting in 2021.
But the Navy is now proposing to build two Virginia boats in 2021 in addition to an Ohio replacement boat to mitigate the expected decline in the size of the attack submarine force.
The Ohio replacement boats, which will replace the aging fleet of "boomers" built in the 1980s and 1990s, will be two-and-a-half times the size of the Virginias.
The Navy currently estimates the Ohio replacement boats will cost $5.2 billion each, but is working to reduce that to $4.9 billion. Non-Navy estimates have been higher.
Virginia boats cost about $2.7 billion each.
Starting in 2019, the Virginia boats will be built with an added 80- to 85-foot-long section called the Virginia Payload Module, which is intended to provide additional Tomahawk missile capacity.
Since 2011, EB and Newport News, partners in the Virginia program, have built two Virginia boats a year.
EB has been beefing up its labor force to meet growing workforce demand, led by the Virginia program now and the Ohio replacement program in the future.
To ensure concurrent building of the Virginia boats and Ohio replacements, EB's parent corporation, General Dynamics, is expected to make a large investment in EB's facilities in Connecticut and Rhode Island.
EB President Jeffrey Geiger has said that over the next 10 years, General Dynamics is aligning itself to make a more than $1.5 billion investment in those two states.
The 2017 National Defense Authorization Act, which sets the policies and guidelines for how defense appropriations will be spent in 2017, is continued good news for EB.
It authorizes two Virginia submarines a year, and restores $85 million in advanced procurement funding for the submarines planned for 2019. That funding was cut in the president's 2017 budget proposal.
The legislation also authorizes continued development of the Virginia Payload Module.
As for the Ohio-class replacement program, $1.4 billion is authorized for development and design work, and $773 million in procurement funding for the first Ohio replacement boat in 2021.
The legislation shifts the $773 million from the Navy's regular shipbuilding account to the National Sea-Based Deterrence Fund, which U.S. Rep. Joe Courtney, D-2nd District, has advocated for as a way to pay for the costly Ohio-replacement program outside of the Navy's regular shipbuilding budget.
The proposal next goes to the full House for consideration.