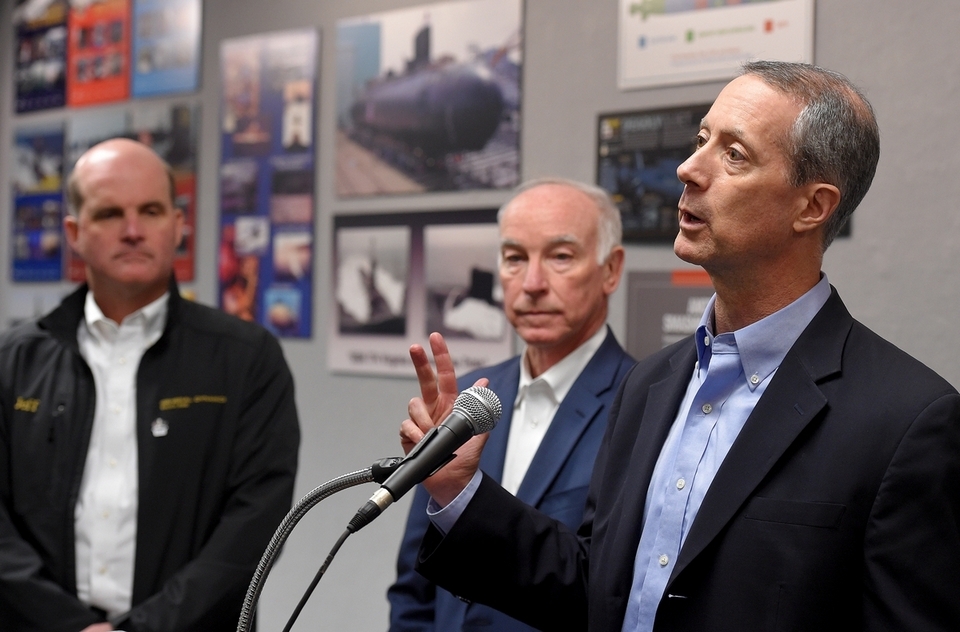 Representative Mac Thornberry, Chairman of the House Armed Services Committee, right,
is flanked by Rep. Joe Courtney, center, and Electric Boat President Jeffrey Geiger during a
press conference at Electric Boat in Groton Tuesday, March 29, 2016. (Tim Cook/The Day)
GROTON – U.S. Rep. Mac Thornberry, R-Texas, chairman of the House Armed Services Committee, toured Electric Boat's Groton facility Tuesday, about a month before the committee takes up the 2017 defense bill.
"The timing of his visit could not be better," U.S. Rep. Joe Courtney, D-2nd District, said during a news conference the two lawmakers held after the tour.
The visit was Thornberry's second to EB. He first came in the late 1990s, soon after he was elected to Congress.
"Needless to say, a lot has changed with submarines and with the way they are constructed," Thornberry said.
Courtney always is on Thornberry's case about submarines, the Texas lawmaker said, so "it is helpful for me to come and see what he's talking about with a little more of a close hand look."
The congressmen's visit followed good news for the submarine builder.
The Navy announced on Monday that EB would be the prime contractor for the estimated $95 billion Ohio-class replacement program.
Plans call for 12 of these next-generation ballistic missile submarines to replace the aging fleet of "boomers" built in the 1980s and 1990s.
EB will design and deliver all 12 boats.
Module construction will be shared between the company and Newport News, its shipbuilding partner in the Virginia-class submarine program, "much in the same way, although not to the same degree as it is on the Virginia program," EB President Jeff Geiger said.
Newport News will perform about 22 to 23 percent of the production work on the program as a subcontractor.
Construction work on the Virginia-class boats is evenly split with the two companies alternating delivery of the boats, nine of which have been commissioned so far.
But, given the priority of the Ohio-class replacement program, Newport News will be delivering additional Virginia boats to the Navy once Ohio replacement construction begins.
In the future, EB will build the Ohio-class replacement boats at the same time as the Virginia-class boats, which starting in 2019 will feature the Virginia Payload Module, an added 80- to 85-foot-long section intended to provide additional Tomahawk missile capacity.
An Ohio-class replacement boat requires about two and a half times the work involved in a Virginia-class boat.
"This is like 30 additional Virginia-class submarines in terms of added workload," Geiger said at EB's annual legislative breakfast at the end of January.
The company will start initial construction of some components for the lead Ohio-class replacement boat this fall, but the majority of construction will start in 2021, Geiger said.
Seventy percent of the country's nuclear deterrent is underwater on submarines, Thornberry said.
He and Courtney have received a number of briefings, both classified and unclassified, over the last year "about our country's eroding technological superiority versus near-peer competitors like Russia, China and others."
"The one area where we are still clearly superior is underwater," Thornberry said. "But other countries are working in that area, too, so it's not something we can take for granted."
Congress still needs to figure out how to pay for the costly program.
Courtney has pushed for the National Sea-Based Deterrence Fund as a way to pay for the Ohio-class replacement boats outside of the Navy's regular shipbuilding budget so as not to take money from other programs.
The fund was established in the 2015 National Defense Authorization Act, which also authorized the transfer of unobligated funds of up to $3.5 billion from fiscal years 2014 through 2016 into the fund.
The 2016 NDAA expanded the fund to allow the transfer of any Department of Defense money, not just from the Navy, and the transfer of unobligated funds from fiscal year 2017 in addition to the aforementioned fiscal years, multiyear procurement and incremental funding.
Thornberry said he supports the fund, which he calls "crucially important."
"The Ohio Replacement Program is essential for the country, but we cannot allow it to take up all the shipbuilding funds," he said, noting, "More people are coming to our point on that."