Coast Guard Academy Uses Disney’s ‘The Finest Hours’ As Example Of Leaders Of Character
By Julia Bergman
The Day
January 28, 2016 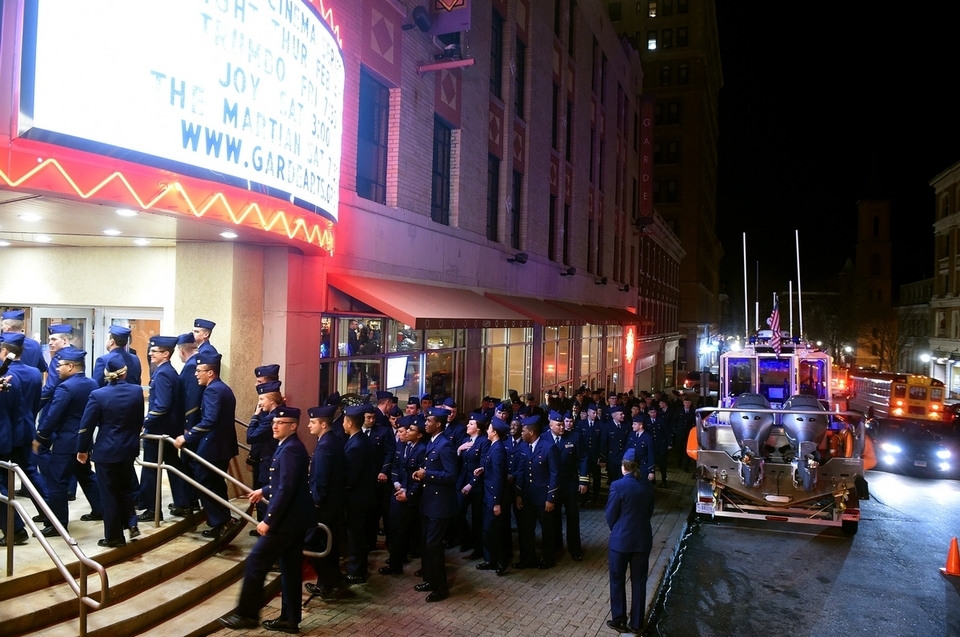 The corps of cadets from the United States Coast Guard Academy and invited guests file in
to the Garde Arts Center in New London Thursday, Jan. 28, 2016 for an advanced screening
of the new movie "The Finest Hours". The Finest Hours retells the rescue of the crew of the
tanker Pendleton by CG-36500 off of Chatham, Mass. on Feb. 18, 1952. (Tim Cook/The Day)
New London — When speaking at Bernie Webber's funeral in Wellfleet, Mass., in 2009, retired U.S. Coast Guard Adm. Thad Allen said "Bernie's genius was creating the art of the possible where none existed."
"That's what we expect leaders of character to do," Allen said in an interview at the Garde Arts Center Thursday night before giving a leadership address to Coast Guard Academy corps of cadets and members of the Officer Candidate School.
Webber is the focus of the Walt Disney Pictures' production of "The Finest Hours," which chronicles the daring Coast Guard rescues of crews from two oil tankers that had both broken in half off the coast of Cape Cod during a nor'easter.
"That's what Bernie Webber did (on) February 1952. He demonstrated who he was by his behavior, how he acted, and he inspired those around him. That is the greatest gift that you can give to your subordinates," Allen told the cadets. "That's actually the greatest gift that you can give to yourself."
After Allen's address, the cadets and officer candidates as well as other invited guests watched a prescreening of the film. Small boxes of popcorn were waiting for them on their seats. The cadets were told they couldn't eat their popcorn until Allen finished his speech.
While select theaters showed the film on Thursday, the official release date is Friday. The movie was meant as a platform to demonstrate the leadership principles that the academy hopes the cadets will develop.
"We talk a lot about the academy being a place where we educate, train, develop and inspire leaders of character and this rescue is all about leaders of character in action," Rear Adm. James Rendon, academy superintendent, said.
The film also raises a valuable question about risk management, according to Allen.
"There are lines in the movie, and you've heard it said theatrically, you have to go out but you don't have to come back," Allen said. "That is not true. We want you to come back."
"So associated with leaders of character and the ability to demonstrate who you are by your behavior, is the included ability to manage risk," Allen continued.
That's the biggest difference, according to Allen, between the Coast Guard of today and the 1950s is the way in which the service approaches risk.
Today, if a boat crew were to go on a "demanding mission," Allen said, they would have a discussion about the risk: the weather, their qualifications, the condition of the boat.
They would then calculate risk through a model called GAR (Green—Amber—Red) in making a go or no go decision. Green is low risk, amber is caution and red is high risk.
"That was not part of Coast Guard doctrine in 1952," Allen said during the interview.
The film is great publicity for the service, which is not known for tooting its own horn.
"If your number one priority is executing the mission, the second or third thing you think about is how to talk about it," Allen said.
The National Coast Guard Museum will help to showcase the stories of Coast Guard men and women, and perhaps will include "a bunch of stuff" from Allen's basement.
"As soon as the museum is done, I'm going to clean out my basement," he joked. "I've got some good stuff."
The National Coast Museum Association hosted a red-carpet reception to drum up awareness and support for the museum effort, an anticipated $100 million project. Though it was not an official fundraising event.
The association has reached close to $35 million in support, Executive Director Wes Pulver said.
RELATED MEDIA
That figure includes a $20 million commitment from the state for a pedestrian bridge that will provide access to the museum, and roughly $15 million in private donations.
Last week, museum organizers announced more than $4 million in pledges including $1 million from one of its honory co-chairs, James David Power III, who along with George H.W. Bush and Arnold Palmer co-hosted an invitation-only advance screening of the film at the Houston Museum of Natural Science.
The association is hoping for $30 million in federal support. Language in the Coast Guard Authorization Bill passed late last year allows federal funding to support displays and exhibits.
That support, however, would not extend to the bricks and mortar aspects of the museum.
U.S. Sen. Chris Murphy, D-Conn., a member of the Senate Appropriations Committee, said he'll be "fighting hard" this year and next to actually get funds appropriated. 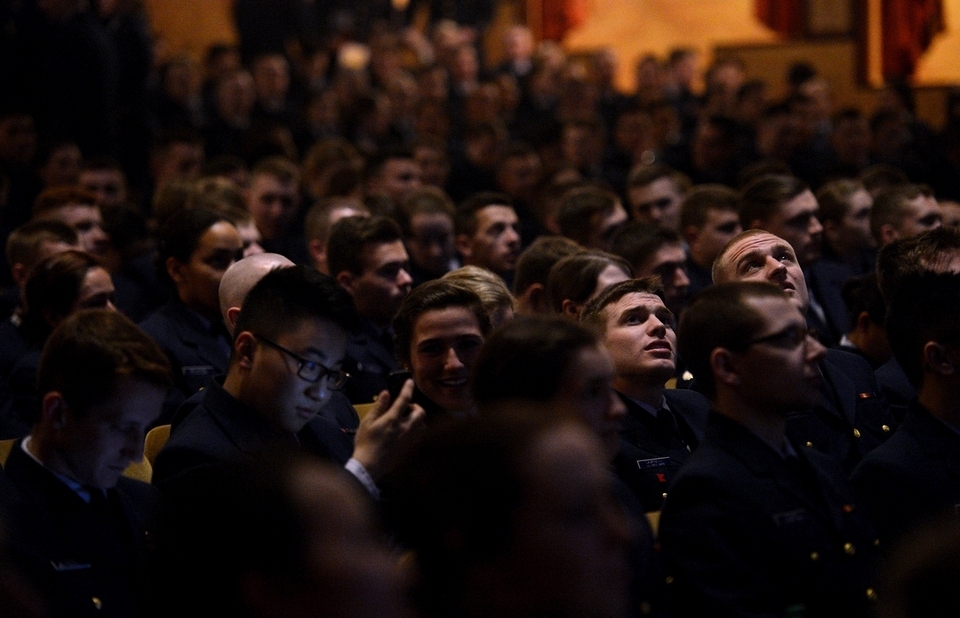 The corps of cadets from the United States Coast Guard Academy and invited guests file in
to the Garde Arts Center in New London Thursday, Jan. 28, 2016 for an advanced screening
of the new movie "The Finest Hours". The Finest Hours retells the rescue of the crew of the
tanker Pendleton by CG-36500 off of Chatham, Mass. on Feb. 18, 1952. (Tim Cook/The Day)
"We won't stop until we're successful," Murphy.
When asked whether he would specifically seek $30 million, Murphy said, "we'll work with the appropriators to find the right amount."
"It would be wonderful if we could get it in one foul swoop," he continued. "Given the reality of the budget, we may have to look at a multi-year appropriation."
Organizers have pushed back the unveiling of more mature schematics of the museum to the end of February.
They hope to open the museum, which will offer free admission, by 2020.