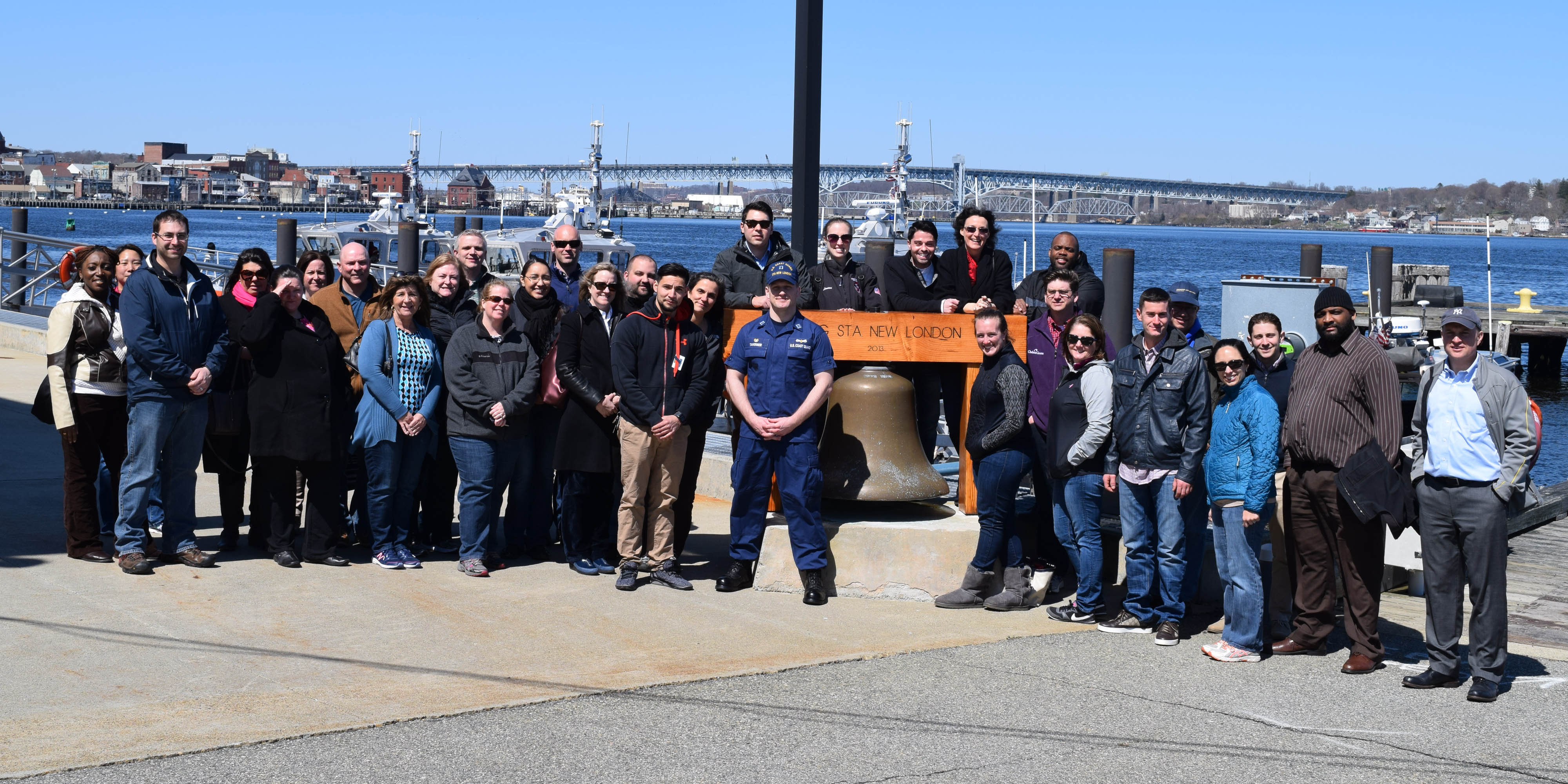 GROTON, Conn. - Members of the local community received a behind-the-gates tour of Naval Submarine Base New London (SUBASE) and Southeastern Connecticut military installations and commands during the Chamber of Commerce of Eastern Connecticut Leadership Program’s fifth annual Military Affairs Session, April 14.
Thirty-six business and community leaders from such sectors as banks, healthcare facilities, and service organizations visited SUBASE as well as the U.S. Coast Guard Station New London, and Camp Niantic of the Connecticut National Guard, for a day filled with tours, briefs, and activities.
In welcoming the group at the day’s kick-off at the Submarine Force Library and Museum, Bob Ross, Executive Director of the State of Connecticut’s Office of Military Affairs, spoke to participants about the significance of their day.
“You have a long but exciting day ahead of you,” said Ross. “You’ll get to see what a very important percentage of America is doing for you, because right now, only one half of one percent of our society is involved in military service.”
To raise the awareness of the hard work and sacrifice of the service-members throughout the local Southeastern Connecticut region, Ross encouraged participants to share the insights and experiences they gained from the day within their own spheres of influence.
“By talking about what you’ve seen and the service members you’ve met back at the office or during other interactions.” Ross said, “You can help raise awareness and appreciation in the other 99 percent of Americans who have increasingly fewer interactions with the military.”
The day was organized by the Chamber as part of the leadership program which identifies future leaders throughout the region.  These men and women will become the driving force behind the Chamber, and it is imperative for them to gain an understanding of the huge positive impact of the military throughout the region.
“The Military Affairs session is one of the most impactful, eye-opening sessions of our Leadership program,” said Megan Cronin, the Chamber’s Program and Event Manager. “Most of our participants have never been behind the fence at any of our local military institutions, so it’s essential that these business and community leaders gain a first-hand understanding of how our economy, community, and indeed our nation benefit from their presence here.”
Following a brief about Naval Submarine Base New London by Capt. Paul Whitescarver, Base commanding officer, participants traveled to the Connecticut National Guard facility, Camp Niantic. At Camp Niantic, participants were able to fly in a Connecticut National Guard Black-Hawk helicopter, practice firing M-16 rifles at the Firearms Training Simulator, and talk to various guard-members about their equipment. The Military Affairs Session allowed Chamber participants to see and experience various roles and missions carried out by members of the Guard.
Col. Gerald Lukowski, Chief of the Joint Staff for the Connecticut National Guard, highlighted the breadth and width of the Guard’s operations.
“Connecticut’s National Guard is one of the best organizations to be involved with in Southeastern Connecticut,” said Lukowski, pointing out that since 2003, more than 5,000 service members from Connecticut National Guard have been deployed.
“Locally the Guard has conducted five large deployments in response to events such as hurricanes and winter storms under the governor, and continues to deploy to places like Afghanistan.”
Lukowski also spoke to the group about the National Guard’s good fortune over the last few years to have benefited from infrastructure investments. One of the biggest benefits being the state-of-the-art training facilities at Camp Niantic which participants had a chance to tour.
The day’s experiences with the military representatives were insightful for Cathy Lazon, a community relations lead at Eversource.
“I was astounded by the professionalism,” said Lazon.
“You could tell the way in which everyone we met today conducted themselves that they take extreme pride in the important work they are doing.”
As Chamber members transitioned to learning about the local sea services, the U.S. Coast Guard Station New London opened the gates where participants had a moment to recharge and enjoy lunch before proceeding on a Coast Guard Patrol craft tour on the Thames River. Coast Guard Station New London’s commanding officer, Lt. Daniel Tavernier greeted the group and discussed the role of the Coast Guard in the Long Island Sound. Participants valued the opportunity, information, and “sea stories” relayed by Tavernier.
Tom Berl, manager of operations at Electric Boat, was amazed at the team dynamic and leadership he witnessed at Coast Guard Station New London.
“I really liked the dynamic at the Coast Guard Station,” Berl said.
“I think Lt. Tavernier is a remarkable leader, who in his early 30’s, leads a strong and engaged team.”
The Navy hosted the last tours of the day, and Capt. Paul Whitescarver, SUBASE commanding officer, provided a brief on the submarine force and the 100 years of base operations to participants.
“Our mission in Groton is ultimately to deploy, combat-ready submarines and crews, throughout the world, to conduct the missions of extreme importance to the United States,” said Whitescarver.
“Our job at SUBASE is to provide the services to support the fleet, fighter, and family, which we have been doing as a base for 100 years.”
The Chamber members then went on to tour the Pressurized Submarine Escape Trainer in Momsen Hall and the Ship’s Control Trainer Nimitz Hall, before concluding their Military-Defense Day experience with a tour of the Los Angeles class fast-attack submarine, USS Pittsburgh (SSN 720).
“What most impressed me at the Army Base, Coast Guard Station, and SUBASE, was the professionalism.” said Berl. “Everyone we met today were professionals and excellent at what they did. It was refreshing and encouraging to see those high caliber people in our military and society.”
As the Chamber’s fifth annual Military Affairs Session concluded, organizers felt the day lived up to expectations and more.
Cronin ended the day by thanking everyone involved.
“We appreciate the many service members who took the time to meet with us, answer our questions, and show us why they love what they do to serve our country.”