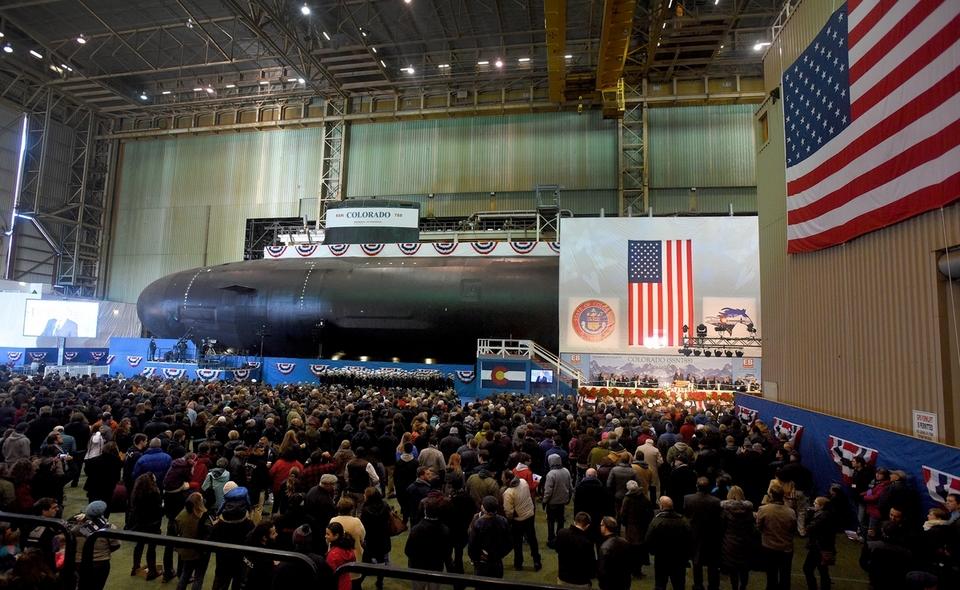 Hundreds gather as General Dynamics Electric Boat hosts the christening ceremony for the
15th Virginia-class, fast-attack submarine, the Colorado, in the main assembly hall at
Electric Boat in Groton on Saturday, Dec. 3, 2016. (Tim Cook/The Day)
Members of Connecticut's congressional delegation are touting victories for the state in a $618.7 billion defense policy bill passed by Congress on Thursday. The bill has not been signed by President Barack Obama, whose administration has threatened to veto previous versions.
The 2017 National Defense Authorization Act, which is two months late, lays out how federal defense dollars will be spent in the new fiscal year that started Oct. 1.
Billions of dollars continue to flow to Connecticut's submarine industry, which spells good news for Electric Boat and its 450-plus suppliers in the state.
Five billion dollars is budgeted for the two Virginia-class attack submarines a year that the company builds with Newport News Shipbuilding in Virginia, and $1.9 billion will go toward building a new fleet of 12 ballistic missile submarines, known as the Columbia-class program, to replace the current fleet of 14 Ohio-class ballistic submarines.
The Virginia-class number includes $85 million that was not in Obama's budget proposal to sustain the two-a-year procurement rate in 2018 and 2019.
While funding for Virginia-class submarines has stayed relatively the same in recent years, more money is being poured into the new ballistic missile submarines as detailed design work ramps up.
Congress appropriated $565 million for the program in fiscal year 2013, compared with the $1.2 billion appropriated last fiscal year.
This year's $1.9 billion includes $773.1 million, originally in jeopardy under a temporary solution to fund the government past midnight on Dec. 9, for early production work. The Senate was slated to vote at 10 p.m. Friday on a "continuing resolution," passed already by the House, to fund the government through April 28.
The fate of the $773.1 million originally was in jeopardy because it is the first year that construction funds are going toward the Columbia-class program and "new starts" are not allowed under continuing resolutions. An exception was made for the program.
"As we begin transitioning to a new administration, this measure makes a solid down payment on growing the fleet and meeting our security challenges on, below, and above the seas, by sustaining our path to a 308 ship fleet by 2021," U.S. Rep. Joe Courtney, D-2nd District, said of the effort to increase the size of the Navy.
Other defense funding on its way to Connecticut includes:
"It's a victory in our fight for more submarines, helicopters and joint strike fighters — made largely in our state and vital to our national defense," U.S. Sen. Richard Blumenthal, D-Conn., said.
A measure, proposed by U.S. Sen. Chris Murphy, D-Conn., and Sen. Rob Portman, R-Ohio, to authorize $160 million over two years to help the U.S. and its allies counter propaganda from Russia, China and other countries, also made it into the defense policy bill.
Under the measure, the State Department would lead efforts within the federal government to track and combat foreign propaganda.
"Over the last decade, countries like Russia have dramatically ramped up efforts to spread propaganda and fake news all over the world, including here in the United States. It is a systematic effort to undermine democratic institutions and beat back America's foreign policy goals," Murphy said.
Some researchers have found that Russia waged a sophisticated propaganda campaign that helped to flood the Internet with fake news during the U.S. presidential campaign.