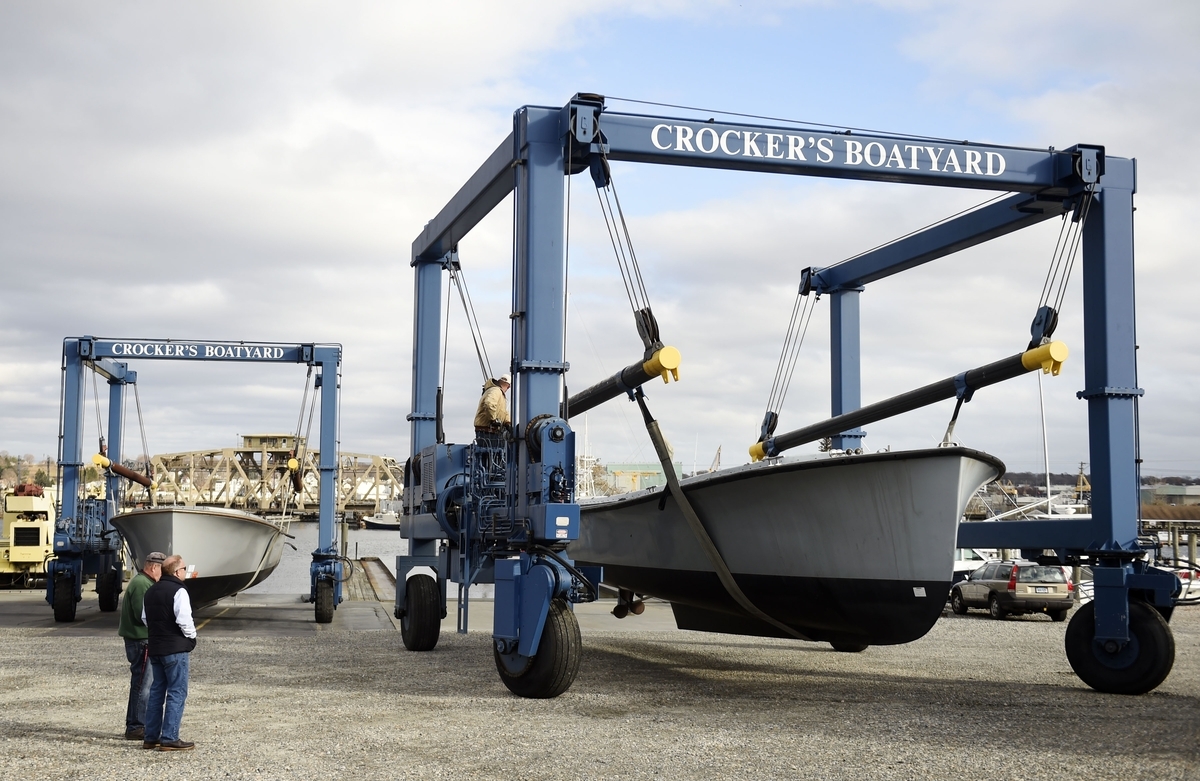 Two 40-foot surplus U.S. Navy launches to be used as water taxis for the Thames River
Heritage Park are delivered to Crocker's Boatyard in New London Monday, Nov. 30, 2015.
The two launches will be stored at Crockers while they are prepared to be put into service
in spring 2016 for service ferrying tourists a cross the Thames River to various sites as
part of the park. (Sean D. Elliot/The Day)
New London — Two surplus Navy troop transport boats destined for new life as Thames River water taxis arrived at Crocker’s Boatyard Monday afternoon, greeted by a small group of local leaders hoping to get them in the water by Memorial Day.
"I could just hug them,” said Groton City Mayor Marian Galbraith, who has been leading the efforts to secure the Navy vessels, as Sam Crocker, son of boatyard owner David Crocker, maneuvered a marine travel lift under one of the boats.
Two Joule Yacht Transport trucks hauled the boats on flatbed trailers from the Cheatham Annex Naval Support Center in Williamsburg, Va., where the boats had been mothballed after decommissioning.
“We’ve moved lots of Navy boats in and out of Cheatham Annex,” said Randy Bennett, who drove one of the trucks. He and fellow driver Michael Ritzel, he said, had a smooth journey to Connecticut after getting through a traffic bottleneck in northern New Jersey, arriving more than a half hour ahead of schedule.
This winter, while the boats are kept in storage space donated by Crocker’s, they will undergo refurbishing to become water taxis that will connect the pieces of the planned Thames River Heritage Park.
The park would combine existing historic sites on the New London and Groton sides of the Thames River under a common theme, signage, events and other elements.
Now, with the vessels in hand, the abstract idea for creating the park takes a major step toward becoming a reality.
“Now it’s true,” Chris Cox, chairman of the Thames River Heritage Park Transition Team, said as he watched the travel lift park one of the boats near the waterfront.
With gray topsides, black hulls and black keels, both of the fiberglass boats will retain their military look, Galbraith said.
“That’s who we are,” she said.
One of the boats had been assigned to the USS LaSalle, the commander of Middle East Forces in the Persian Gulf in 1988, while the other boat had been assigned to the USS Hunley, a submarine tender homeported in Charleston, S.C.
For Capt. Carl Lahti, commanding officer of the Naval Submarine Base New London and a liaison to the park project, seeing the boats arrive brought back memories.
“I used to ride on these things all the time in the '90s, to and from sub tenders,” Lahti said.
Work on the boats will begin “as soon as possible,” Galbraith said, with a marine survey to determine the extent of overhaul needed.
An operator for the water taxi survey will be sought through a public proposal process, she said. 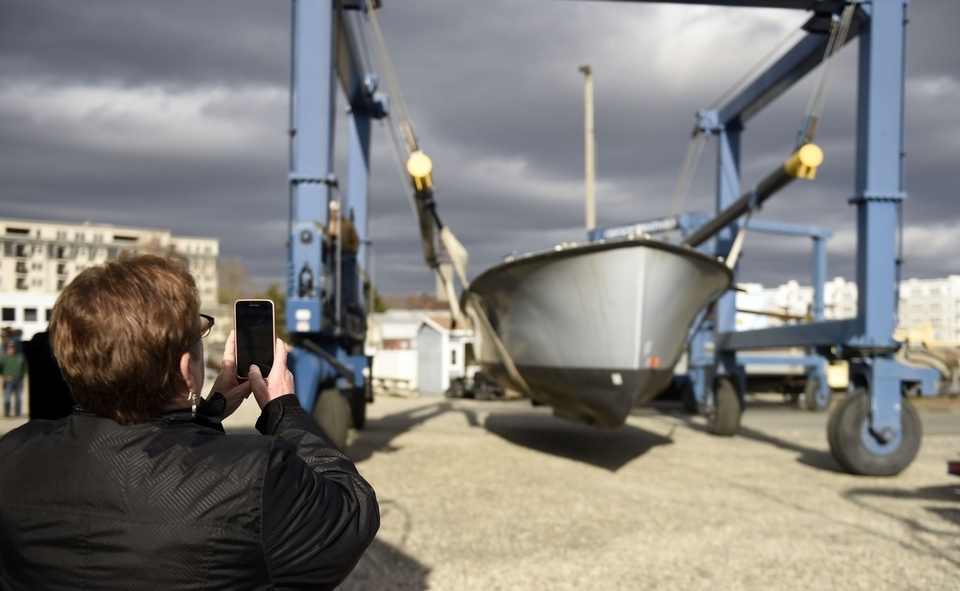 Groton City Mayor Marian Galbraith snaps photos as the second of two 40-foot surplus
U.S. Navy launches to be used as water taxis for the Thames River Heritage Park is
delivered to Crocker's Boatyard in New London Monday, Nov. 30, 2015. (Sean D. Elliot/The Day)
Coast Guard Commander Jason Gunning, head of the prevention department at the marine inspections office of the Coast Guard's Sector Long Island Sound office in New Haven, urged the park planners to contact his office soon.
"I don't see any major roadblocks" in obtaining Coast Guard certification to use the vessels as water taxis, he said, adding that there are several other former Navy vessels in the state being used as passenger ferries.
But the refurbishing work should not begin until Coast Guard officials can see the vessels and give advice on what will need to be done to meet the agency's requirements.
"We recommend they talk to us as soon as possible," he said. "You don't want to start refurbishing until we tell you what you need to do."