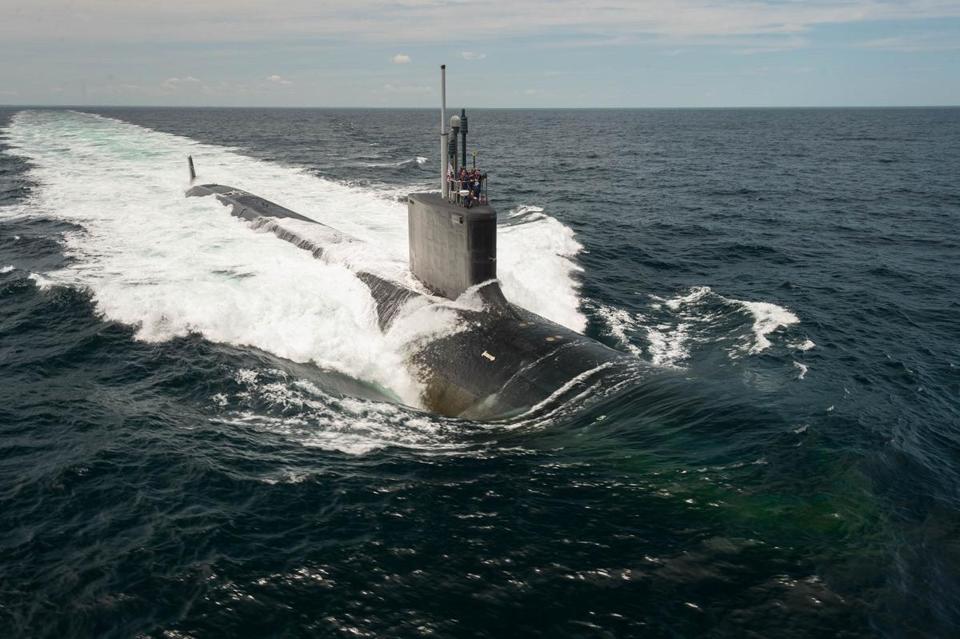 US Navy
The USS Massachusetts will be a Virginia Class submarine like the USS John Warner,
pictured during sea trials in the Atlantic Ocean over the summer.
This weekend, the Navy will formally announce that the newest Virginia Class nuclear attack submarine will bear the name USS Massachusetts (SSN 798). A ship’s naming is the first milestone in bringing it to life, and this new vessel continues the long tradition of strong connection between the people of Massachusetts, the sea, and the US Navy.
It is also an opportunity to highlight our commitment to increasing the size of the fleet.
The Navy and Marine Corps offer the best value to advance global security and US economic interests in the face of fiscal challenges and an increasing array of threats. The Navy and Marine Corps provide a military presence, around the world, around the clock. Maintaining that presence means getting there faster, staying there longer, bringing all the needed supplies, and getting the job done without needing anyone else’s permission.
Born a maritime nation, America has always known that success depends on an exceptional Navy and Marine Corps. From the time the Navy was six frigates to today, political leaders across the political spectrum have understood the vital significance of sea power.
More than 80 percent of the world’s population lives within 60 miles of the sea; 90 percent of global trade goes by sea; and 95 percent of all voice and data transfer goes under the ocean. Some 40 million American jobs are directly linked to seaborne international trade. For seven decades, the presence of the Navy and Marine Corps has been the primary protector of maintaining open sea lanes and freedom of commerce.
Maintaining a naval presence requires a properly sized fleet. On Sept. 11, 2001, the fleet stood at 316 ships. By 2008, it had declined to 278 ships. But that slide has now been halted.
By the end of the decade, the Navy will once again top 300 ships. Building those ships also provides thousands of high-skilled, good-paying jobs, not just in Navy shipbuilding yards, but for subcontractors in nearly every single state in the nation.
Here in Massachusetts, the shipbuilding industry and the Navy play a role in the regional economy. The Massachusetts shipyard industry contributes more than $551 million annually to the state gross domestic product, as well as nearly 5,000 jobs. Store shelves are stocked with deliveries from around the globe because the Navy and Marine Corps are present across the world’s oceans, keeping the sea lanes open and ensuring maritime security.
The USS Massachusetts will soon sail the world’s oceans in defense of the nation, and her journey starts right here. One of the greatest strengths of a submarine is the highly trained crew of sailors and Marines who sail aboard it. Around the world, far from their homes and families, they are deployed in defense of the country. Today, the partnership between the men and women in uniform and the people of Massachusetts is playing a vital role in maintaining American sea power and presence around the world.