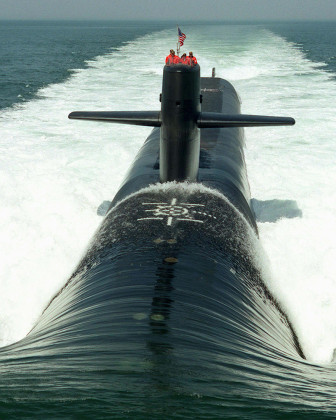 An Ohio-class submarine under way (Photo General Dynamics Electric Boat)
Washington - The defense budget is in flux, but the Navy is moving forward on plans for a new missile-firing nuclear submarine that Electric Boat hopes to build in partnership with Newport News Shipbuilding.
Matt Leonard, a spokesman for the Naval Sea Systems Command, said Friday that the Navy hopes to release a request for proposal next month for the detailed design of the SSBN(X) – also known as the Ohio-class replacement submarine.
The Navy needs a replacement for the Ohio-class boats, which were built by Electric Boat, because they are reaching a 42-year operational lifetime and will be retired at a rate of one per year beginning in 2027. The Navy envisions building 12 of the new generation of submarines and hopes to have some by then. Like the Ohio class, the new submarines would carry multi-warhead nuclear missiles as a key part of the nation's nuclear deterrent.
Leonard said the submarine program office will meet with Navy leadership to set a technical baseline for the Ohio-class replacement next month.
“The SSBN(X) program is moving forward in preparation for a design contract to be awarded about a year from now, Fall 2016,” Leonard said.
A construction contract would come later.
Electric Boat and Newport News, which teamed up to produce the Virginia class of nuclear attack submarines, submitted a proposal to team up on the Ohio-class replacement in March. That proposal would have Electric Boat complete the majority of work.
But the Navy has not approved the partnership yet, said Timothy Boulay, spokesman for Electric Boat.
The Navy’s decision to move forward with the Ohio-class replacement, which would be the most expensive U.S. submarine ever built at about $6 billion apiece, comes as the future of defense funding is in doubt.
President Obama this week vetoed a defense authorization bill that would provide billions of dollars to Connecticut’s defense industry because the president did not like the way some of the bill’s $612 billion in spending was accounted for, calling it a "gimmick."
Republican leaders shifted $38 billion to a special war-funding account that does not count against budget limits, while nondefense spending remains bound by them. Obama wants caps on both defense and non-defense spending to be lifted.
“My message to (Congress) is very simple: ‘Let’s do this right,’” the president said after he vetoed the bill
The defense authorization bill also would have allowed the Pentagon to shift money from other programs into a newly established National Sea-Based Deterrence Fund that would finance the Ohio-class replacement subs.
The sea-based deterrence fund was established because of concerns that the cost of the nuclear boats would bust the Navy’s shipbuilding budget. Opponents want the cost of the Ohio-class replacement to remain in the Navy's budget, which would force the service to make tough spending choices.
“This is an asset that is not just the Navy’s, but the country’s,” said Rep. Joe Courtney, D-3rd District, a backer of the special fund, when the bill was debated in the House earlier this year. “It's (cost) will be borne by the submarine program far greater than in the past. The Air Force and long-range bombers and
the Army are not going to be bearing the same burden.”
Another constraint is that the Pentagon is currently being funded at last year’s spending levels because Congress could not agree on a new federal budget. That stopgap bill expires on Dec. 11.
If Congress cannot agree on a new budget by then and decides to fund federal programs at this year’s level until the end of the 2016 fiscal year, the Navy says it will be short of what it needs to fund its priorities by $11.3 billion.
The Ohio replacement submarine and plans for additional F-35 Joint Strike fighter jets are among the programs the Navy says it would have to postpone.