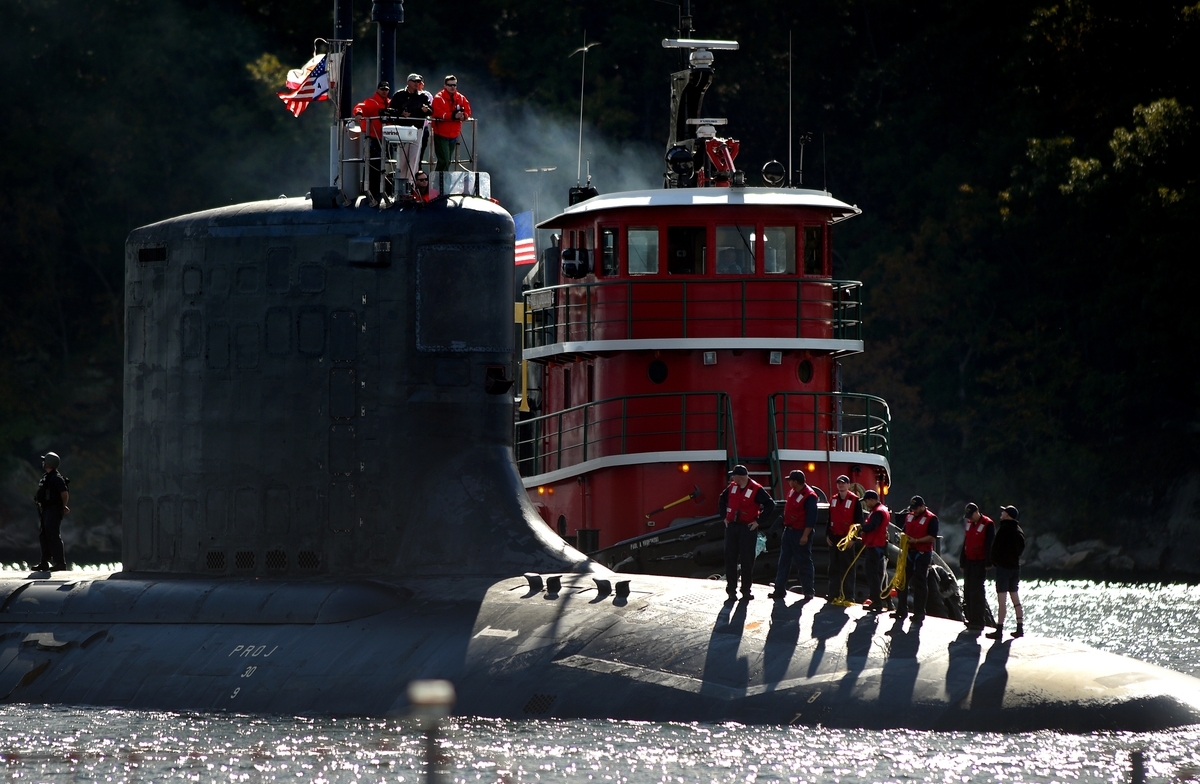 The Virginia-class, fast attack submarine USS California (SSN 781) makes its way up the
Thames River returning to U.S. Naval Submarine Base New London from deployment Friday
Oct. 16, 2015. The California's return coincides with the 100th anniversary of the first
submarines to arrive in Groton. (Tim Cook/The Day)
GROTON – At 377 feet long, the nuclear-powered attack submarine that made its way up the Thames River Friday afternoon dwarfed those that came nearly 100 years before it.
Sunday marks the 100th anniversary of the first submarines to arrive at the submarine base, and Navy and local officials gathered Friday at one of the many piers where submarines dock at the base to commemorate that anniversary and kick off a yearlong celebration of submarines.
Gov. Dannel P. Malloy has designated October 2015 through October 2016 as the celebration of "Connecticut's Submarine Century."
The USS California, a Virginia-class submarine back from a month-long operation, served as a symbolic re-enactment of the arrival of the first submarines to be homeported in Groton in 1915. 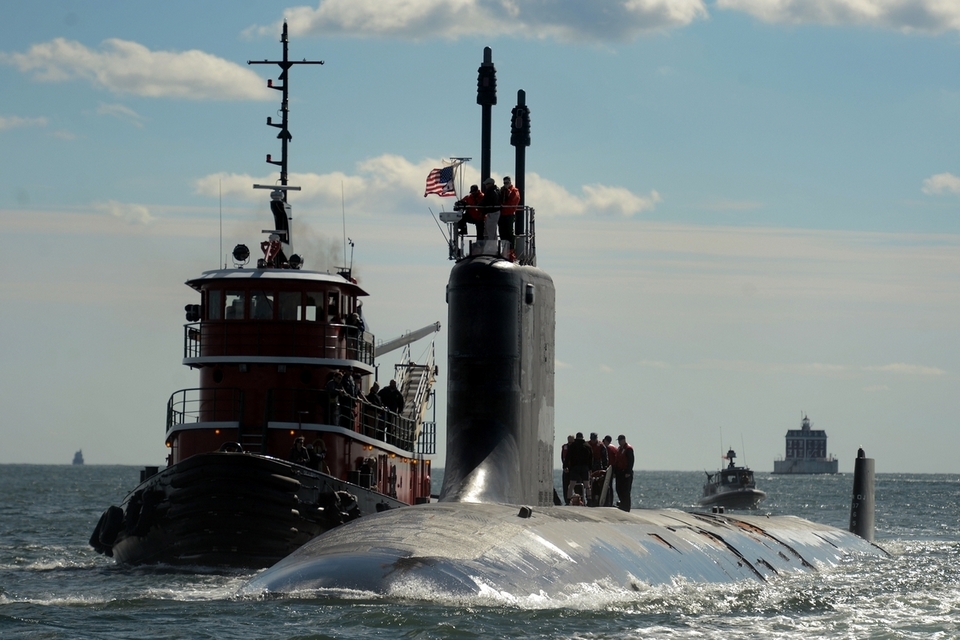 The tugboat Paul A. Wronowski guides the Virginia-class, fast attack submarine USS
California (SSN 781) after transferring dignitaries aboard the submarine on the Thames
River as the California returns from deployment Friday, Oct. 16, 2015. (Tim Cook/The Day)
On Oct. 18, 1915, the submarines G-1, G-2 and G-4 under the care of the tender USS Ozark arrived at the sub base. Then the submarines E-1, D-1, and D-3 with the tender USS Tonopah arrived, bolstering the small force.
"From these seeds would sprout the nation's first submarine base," Capt. Carl Lahti, commanding officer at the base, said in his remarks.
Today, 15 nuclear-powered submarines are homeported at the base, according to Lahti.
The Naval Submarine School, where nearly all the Navy's submariners pass through, is also celebrating its 100th birthday.
Sen. Chris Murphy, D-Conn., was one of several special guests who embarked on the California as it made its way to the pier.
"What a ride, really a highlight of my first three years in the United States Senate representing southeastern Connecticut to get to ride into port with Commander (Eric) Sager and his very capable crew," a visibly giddy Murphy said.
Mayor of the City of Groton Marian Galbraith also rode in on the submarine.
"It's our opportunity to tell the state, the nation, but most importantly the Navy that we are so proud to be your home," Galbraith said of the yearlong celebration. "We are submarine proud."
Galbraith, Lathi and Murphy all outlined the strong relationship in this region between the Navy and the community.
Since its establishment as the nation's first submarine base, Lahti said the base's mission has been "to provide the facilities and deliver the services that create the environment for the fleet, the fighter and the family to deploy combat ready submarine crews and to train a corps of professional submariners."
Today, the base carries out that mission through a focus on infrastructure, energy, the environment, encroachment and engagement, he said.
Since 2005, more than $200 million in federal and state investments to the base have been made to reduce unneeded infrastructure, make energy improvements, and, Lahti said, "become one operational unit remedy away from being off the Superfund list from the EPA," among other projects.
Asked by reporters after the news conference whether he feared another Base Realignment and Closure round, Murphy said, "I'm not afraid of BRAC coming back."
"We've made such amazing investments in the sub base both from a federal perspective and a state perspective that we're confident the sub base is here to stay," he continued.
The Navy is gearing up to build more submarines than ever before, Murphy said, with two Virginia-class submarines being built a year and construction soon to start on the Ohio-replacement class, the Navy's new class of ballistic missile submarines.