Eagle To Be Featured On Stamp Honoring The Coast Guard
By Julia Bergman
The Day
January 22, 2015 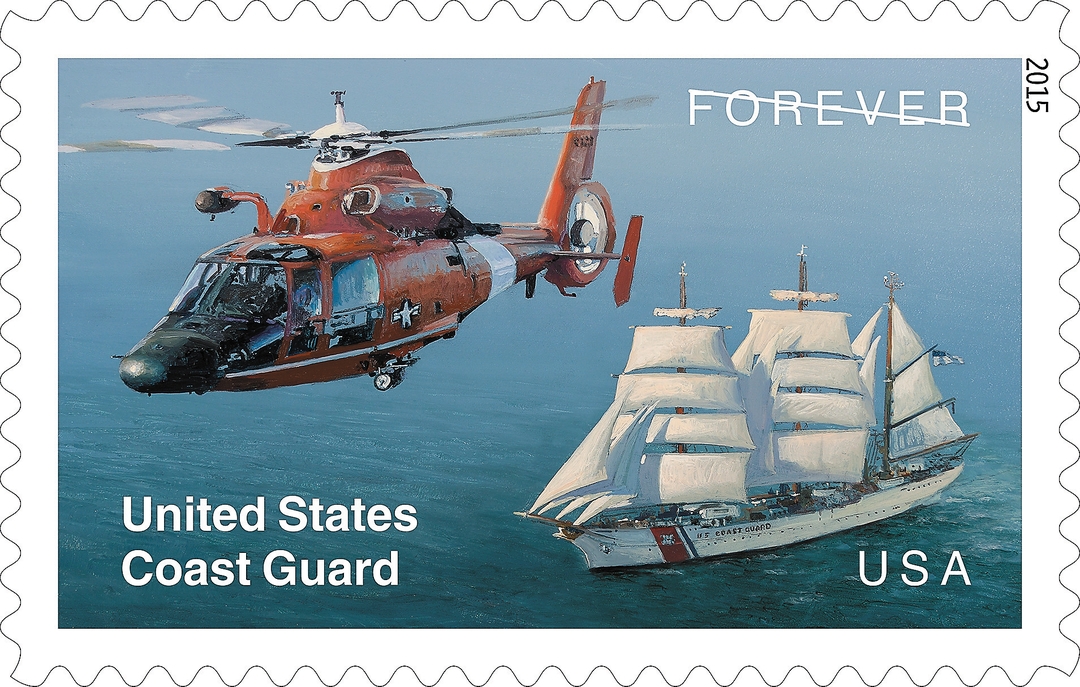 Courtesy of U.S. Postal Service
Each year the U.S. Postal Service receives between 20,000 and 30,000 suggestions for stamp ideas. Many of those suggestions in recent years were for a stamp recognizing the achievements of the U.S. Coast Guard. And so, this August, the USPS will issue a "forever" stamp in honor of the multi-mission military service.
"We are proud to honor members of the Coast Guard for serving our nation and for the thousands of individuals they have rescued," said Mark Saunders, a USPS spokesman who is heading up the effort.
"It's really an honor to be recognized by the Postal Service on the stamp especially with next month being the 100th anniversary of the Coast Guard merger with the Revenue Cutter Service and the Lifesaving Service, and this year also being the 225th anniversary," said Petty Officer Myeonghi Clegg, with the service's Northeast/First District Public Affairs division.
The Coast Guard will celebrate its 225th birthday in August.
Renowned aviation artist William Phillips, who is based in Oregon, designed the stamp, which depicts a MH-65D helicopter flying over the barque Eagle. The back of the stamp will display the Coast Guard's motto "Semper Paratus - Always Ready."
This is not Phillips' first project for the USPS. He also designed the 20-stamp Classic American Aircraft, Classic Collection in 1997; the 10-stamp American Advances in Aviation in 2005; the Air Force One Priority Mail stamp; and the Marine One Express Mail stamp in 2007.
"The issuance of the stamp will bring attention to our often forgotten and great military maritime service across all of America," said Capt. Ed Cubanski, commander of Sector Long Island Sound.
"The picture of the USCGC Eagle and MH-65D helicopter is a fitting contrast as the Coast Guard moves forward with modernizing our cutter surface fleet preserving our historic past while recognizing the urgent need for fleet modernization," Cubanski said. "The modernization of our fleet is necessary to address the hazards threatening our maritime borders close in and overseas in our armed forces, law enforcement agency, and humanitarian missions."
The Coast Guard's story began in 1790. In August of that year, at the urging of Alexander Hamilton, considered to be the founder of the service, President George Washington signed into law an act that provided for a fleet of 10 vessels, known as revenue cutters, to serve as an armed customs enforcement service. At the time, maritime smuggling was rampant and was starving the country of desperately needed tariff revenue. The small fleet eventually came to be known as the Revenue Cutter Service, the forerunner of today's Coast Guard.
Today, the Coast Guard is the nation's first responder on its waterways and oceans. Additionally, the service enforces maritime law, maintains shipping lanes, breaks ice, protects the maritime environment, responds to oil spills and water pollution, ensures port security and combats terrorism.
One of the service's most recognized efforts in recent years was its search-and-rescue response in 2005 after Hurricane Katrina slammed the Gulf Coast. Around 5,000 members of the Coast Guard and a large percentage of the Coast Guard helicopter fleet responded to the disaster area. In all, Coast Guard personnel rescued more than 30,000 people in Mississippi and Louisiana, according to documents from the service.
Today, the Coast Guard has 43,000 active-duty members, 8,000 reservists and over 30,000 volunteer auxiliary personnel, according to its website.

This summer, New London will serve as the epicenter of what Gov. Dannel P. Malloy recently declared as "Connecticut's Coast Guard Summer." The city is also the planned home for the National Coast Guard Museum currently in the works.