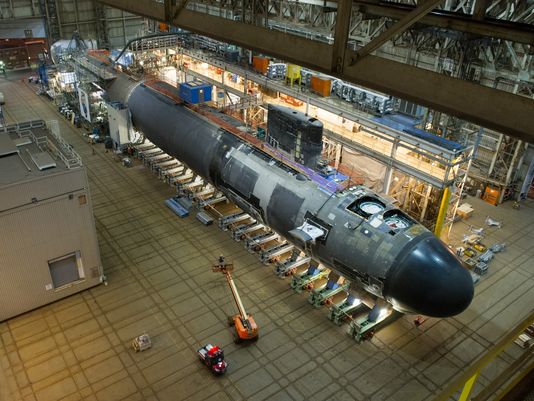 GROTON, Connecticut — A surge of work is rippling through the building yards of General Dynamics Electric Boat (EB) the likes of which has not been seen since the end of the Cold War.

At the manufacturing facility in Quonset Point, Rhode Island, and the assembly and design facilities in Groton and New London, Connecticut, thousands of employees have been added, with more hires to come. Quonset Point is expanding and erecting new buildings and the Groton waterfront is getting a major refurbishment. The ramp ups are expected to continue for at least another decade, into the mid-2020s and beyond.

All this is in reaction to a heightened tempo of submarine attack boat construction, increased conversion and overhaul work, and the beginnings of the program to build the biggest undersea craft the US Navy has ever fielded — a new class of ballistic missile subs known as the Ohio Replacement Program (ORP), designated SSBN(X) by the Navy.

The pace of construction for Virginia-class nuclear-powered attack submarines has doubled since 2011, when the US Navy upped the construction rate to two subs per year. Construction is split between EB and Newport News Shipbuilding in Virginia — each yard builds specific parts of the submarines — and the shipbuilders alternated in assembling and completing the subs.

But two per year means that, beginning this year and next, each yard will start to deliver one Virginia-class submarine per year, and both shipbuilders have been steadily increasing their workforces to deal with the surge. The wave of increased production already has swept through the manufacturing facilities at Quonset Point, and when the Illinois is delivered in December, the surge will be increasingly felt in Groton.

EB is hard at work on four major projects: Virginia-class Block III and Block IV submarines are under construction, and work on the first of two moored training ship conversions is under way. In development are Block V Virginias, incorporating an added 85-foot midsection called the Virginia Payload Module, and work to prepare for and design the ORP has already begun, long in advance of 2021, when the first ship is expected to be fully funded.

"We have got 2,700 people or thereabouts, designers and engineers and other pre-production personnel, working on the ORP right now," Jeff Geiger, president of Electric Boat, said April 1. "That is doing the work now. That is not prepping. That is actually producing the systems engineering and the early functional design and basic arrangements for the submarine."

The workload numbers are impressive: A total of 17 Block III and Block IV subs are expected to be built, along with up to 20 or more Block Vs. The Navy plans to build 12 ORPs in a program that stretches well into the 2030s.

Parts of at least nine submarines are being worked on in Quonset Point and Groton. The Illinois, with all hull sections fully assembled, is expected to be launched next month at Groton, and parts of the Washington, Colorado, Indiana, South Dakota, Delaware, Vermont, Oregon, the yet-to-be-named SSN 794, and the Hyman G. Rickover can be found in various stages all through the yards.

In other words, EB is full up with Virginia-class construction.

"We're at capacity now in certain areas, and one of them is hull construction," said Sean Davies, general manager of the Quonset Point plant.

To handle the increased ORP workload, GD in December 2013 leased an additional 42 acres from the state of Rhode Island specifically to support ORP construction. The length of the 25-year leases are, Davies said, "unprecedented for GD."

The new acreage is adjacent and in addition to the existing 133-acre Electric Boat plant, of which GD owns just 33 acres.

Construction already has begun on the newly leased land on a new Automated Frame and Cylinder building (AFC), which will handle construction of the ORP's pressure hull and other structures.

After completion, the first work in the new AFC building will support the common missile compartment, a cooperative arrangement to design and build the missile compartments for the ORP and the United Kingdom's Successor ballistic-missile submarine. Work to build the first four-tube missile assemblies for the British subs will begin in 2017, before the ORP units.

Already in use at Quonset Point is an annex added to an existing building to assemble components for the Moored Training Ship (MTS), a project to convert the Los Angeles-class attack boats La Jolla and San Francisco into static training assets.

"We were already at capacity," explained Walter Tift, manager of operations for the MTS project. "We needed this space." Around him were new hull sections for the La Jolla, which entered Norfolk Naval Shipyard in February to begin the conversion. Up to 420 EB employees are working on the MTS program.

The MTS facility has been set up in just over a year.

"We went from a building that did not have a certificate of occupancy a little over a year ago to having 400 to 500 people cranking out modules," said Geiger. "It has been a very compressed and schedule-critical effort, but it has gone very well."

The previous peak was 5,900 in 1984, when Ohio-class and Los Angeles-class submarine construction was at its highest point. As production wound down, employment at Quonset dropped to about 1,000 employees in 1996.

At Groton, the plant isn't expanding as it is in Quonset Point, but rather a number of facility replacements and upgrades are underway or planned. Among the improvements, said Tom Plante, director of strategic planning at EB, are a new pontoon barge for the dry dock, a new built-for-the-purpose barge to shuttle submarine sections between locations, waterfront improvements to support the big ORPs in the post-launch fitting-out period, and possibly a new pier to handle the increased activity.

EB is also working to get back on the step to deliver its submarines ahead of schedule, and to increase that rate with each successive hull. That pace suffered a setback last year when the goal of delivering the North Dakota four months ahead of schedule couldn't be met, primarily because of challenges stemming from the ship's altered configuration as the first Block III submarine. The ship ended up being delivered just two days prior to the contract date.

But construction of the Illinois is back on the fast track, said Ken Blomstedt, EB's Virginia program manager, with a goal of a 58-month building time — which would be a new class record.

"It is aggressive," Blomstedt acknowledged, "but we're very confident we can get under 60 months."

With its expanding workforce, EB has increased the number of submarine overhauls, or availabilities, done at Groton. The Minnesota, commissioned in 2013, is in the yard now undergoing its post-shakedown availability — all Virginia-class submarines undergo their PSA, the first overhaul performed on a new submarine, at Groton — but the yard has contracts to take in the Los Angeles-class submarines Columbia and Montpelier this year, and it performed four similar overhauls in 2014.

EB's ability to handle overhauls is getting better, as the time it takes a Virginia-class sub to undergo its PSA is being cut nearly in half; the Minnesota is the last to schedule a year-long overhaul, and subsequent PSAs will be closer to six months.

While Congress and the Navy in Washington wrangle over how to pay for the ORPs, there does not appear to be any major dispute that the ships will be built. Not surprisingly, Geiger is optimistic about his shipyard's future.

"We are a pretty popular entity" in New England, he said. "Not just because of what Electric Boat offers but because of what that does throughout the supply base and how it ripples both in the communities locally and nationally. To have the US Navy and the congressional support for the submarine programs in the midst of the very tight fiscal environment for defense and otherwise, it is a great place to be."