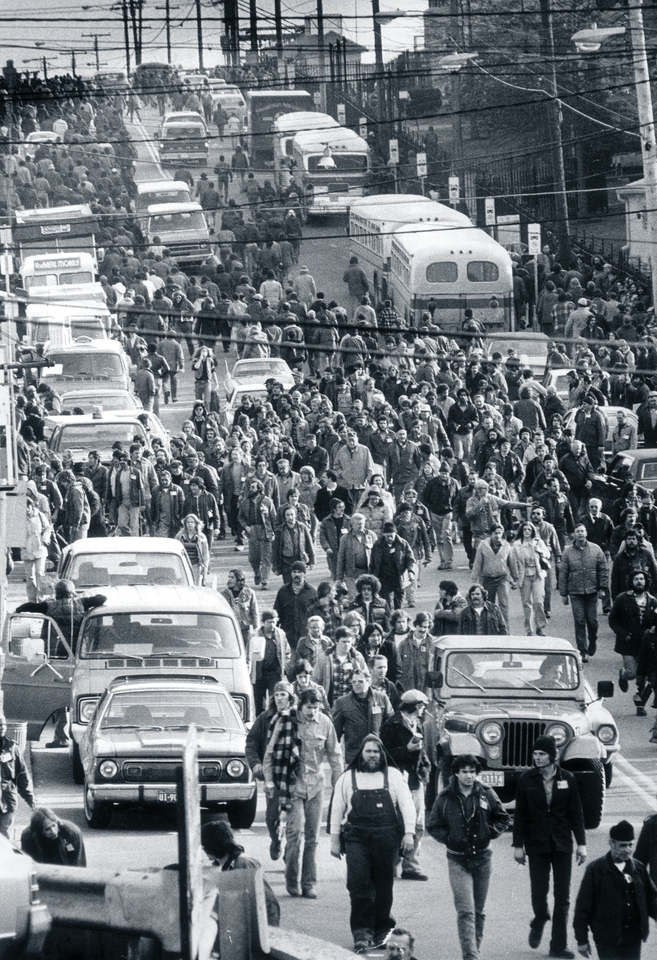 Electric Boat staff break for lunch in this circa-1970s photo.
Day file photo
The 1960s was a time of huge social and political upheaval. There was a counterculture revolution among youth, the assassination of President Kennedy, the civil rights movement, organized labor strikes. There also was the escalation of the Cold War and the Cuban missile crisis, which had a big impact in southeastern Connecticut where Groton's Electric Boat Company, a division of General Dynamics, played a crucial role as a submarine manufacturer.
The Groton Public Library received a grant from the Connecticut Humanities to tell the stories of employees who were at EB in the 1960s, funded through the Connecticut at Work program, a yearlong project exploring the past, present, and future of work in the state.
The name of the project is "Full Speed into the Nuclear Age: An EB Oral History."
Barbara Nagy, a freelance writer and communications consultant, who is also the site administrator at the Hempstead Houses in New London, recently completed interviews for the project with 24 retired workers, who ranged in age from about 70 to 95.
The grant budgeted for transcribing interviews of 12 to 15 people, but Nagy says she received numerous calls from individuals in the region who were either interested in being interviewed or had suggestions of other people they thought she should interview.

Nagy has her own history with Electric Boat. EB was her beat as defense reporter for The Day from 1987 to 1994.
"I've always been really interested in EB," she says. "There are so many different aspects to it: economical, social, union issues, health and safety, national defense. It's a huge employer with a big economic impact."
She says one of the reasons for choosing the 1960s was that people she interviewed would still be in their late 60s, 70s - or older.
"It's important to get these stories down because these people are getting older and a lot of them have died."
Another reason for selecting the 1960s, she says, was that it was an "in between" time at EB.
"There was The Nautilus in the '50s-the first nuclear submarine. And in the '70s, there was a huge boom in construction with the 688 Los Angeles Class and 726 Ohio Class in production. Employment at EB peaked in the '70s - there were 25,000 people working there. I didn't want to get into the '70s, it was a little too recent and the issues were different. I thought the '60s were really interesting in setting the stage for the full nuclear yard to come, and the loss of The Thresher was really important in the '60s."
The USS Thresher nuclear-powered attack submarine sank during test trials in 1963, killing all 129 people onboard. Electric Boat didn't build it (it was built in the Portsmouth Naval Shipyard) but had performed maintenance on the submarine.
"It came up much more in these interviews than I thought it would," Nagy says. "People were very familiar with the boat and design and were very proud of the work they did building other submarines at the time. The fact that a submarine like that could have failed was very sobering - to realize the effect your work could have on people was shocking."
Following the Thresher tragedy, the Navy developed its Submarine Safety or SUB-SAFE program, implemented at Electric Boat.
Another common thread in the conversations, Nagy says, was changes in boat building during the 1960s.
"They were transitioning to the more systematic construction methods, more standardized construction," she says, "and getting ready for the bigger submarine programs that were coming in the late '60s and early '70s."
One of her interviewees, Mike Toner, who is now retired, started out as an engineer in 1965 and became senior vice president of Electric Boat in the 1990s.
"He kept talking about the spectacular people, the really smart people at EB," Nagy says. "How do you build a nuclear submarine and how do you build 30 submarines in a row? And how do you build an even bigger ballistic submarine? A lot of the people (I interviewed) talked about the really brilliant people at EB that were figuring these things out - the really creative geniuses that were there."
Nagy asked people what they liked best about their jobs and says the common response, whatever their specific position, was that they liked the challenges.
"I talked to a rigger who worked in the yard for 30-something years. He was really intrigued with the challenge of moving things: How do you move this piece of equipment from here to there? There was always something different that required a lot of thinking and planning. For engineers, it was about designing a piece of equipment or a system to meet certain specifications. For a manager it was, how do you meet this deadline? Across the board, the challenges were what people really enjoyed about working there. People also said the (other employees) they met were really interesting and smart. Some of them were real characters. There was a lot of camaraderie, in some offices, anyway."
One thing people liked least about their jobs that came up a lot in the interviews were the men's regrets about how their long hours kept them away from their families.
She notes that she only interviewed one woman for the project, the second woman hired as a draftsman at EB - Jane Manley of New London.
"No women were working in the yard in the 1960s," she says. "And women I talked to said that in the '60s women couldn't advance to supervisory positions."
Nagy also asked the interviewees how aware they were of the Cold War and how it affected their work.
"The answers were really varied. Some people said it definitely affected their work, gave them a sense of urgency. This was mostly people who were engineers or managers, thinking at a different level than people in the yard. The tradespeople were mostly trying to get their jobs done on a daily basis and weren't thinking about Russia.
"Another thing I asked people about were the peace protesters at EB. By and large, they were respective of anti-nuclear people, but most of them thought we needed a deterrent against the Soviet Union and were very patriotic."
Nagy explains why she thinks it matters that these stories are told and recorded.
"The role that submarines played in the Cold War and continue to play today is an important part of American history," she says. "It's important for people to know how we responded to the Cold War, getting down to a pipe fitter or a rigger - getting down to that granular level.
"As a historian, I think it's really interesting to know what people were thinking on that level - a level that's really hard for historians to get to once time passes."