Eagle, Back Home For Now, Will Soon Become A Rare Sight
By Jennifer McDermott
The Day
January 23, 2014 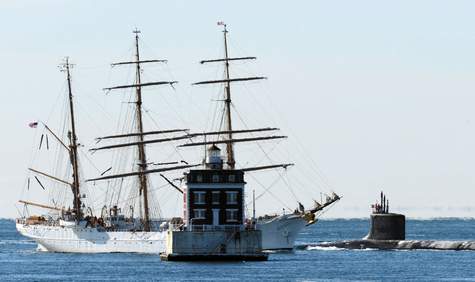 Sean D. Elliot/The Day
The Coast Guard barque Eagle motors past New London Ledge Light as the Virginia-class
submarine USS California passes Thursday.
Coast Guard barque will spend much of next 4 years away
New London — The U.S. Coast Guard barque Eagle will spend half of each year for the next four years at the Coast Guard Yard in Baltimore and the other half at sea, with only brief stops in its homeport of New London.
Eagle will administratively shift its homeport, temporarily, from New London to Baltimore beginning April 1 so the crew's families can begin moving, with the goal of returning in 2018, Capt. Raymond "Wes" Pulver, Eagle's commanding officer, said Thursday. The ship will go to Baltimore in September.
The barque returned to New London Thursday after spending four months in the yard in Baltimore for maintenance work. More extensive projects will be done during the six-month periods, Pulver said, so Eagle can continue to be the training vessel for Coast Guard Academy cadets and officer candidates for another 30 to 40 years.
For now, the crew will focus on the training and inspections to get ready for the summer training program for academy cadets and officer candidates for the Coast Guard and the National Oceanic and Atmospheric Administration, Pulver added.
Eagle leaves in March to sail along the East Coast to North Carolina with the first group of officer candidates before returning in early April to City Pier.
Eagle will spend most of the month and early May hosting tours for the public at City Pier, then sail with cadets to the Caribbean, Canada and ports along the East Coast this summer before returning to City Pier again for about three weeks in August.
Pulver said he wants to spend more time downtown in the coming months to highlight Eagle as part of the fabric of the community here. When Eagle was last at City Pier in April, 200 to 300 people visited a day, Pulver said. When Eagle is at Fort Trumbull and the crew is working on the ship, about 20 people a day visit.
In September, after another group of officer candidates sail aboard it, Eagle will go to Baltimore for the service-life extension, during which time antiquated equipment will be replaced, lead paint will be removed and work will be done on the hull. The work will be done over four years so the crew can still sail to train the Coast Guard's future leaders and maintain their skills, Pulver said.
The barque underwent a service-life extension more than 30 years ago and is due for another.
Even while the ship is based in Baltimore, Pulver said he will try to bring Eagle to New London as often as possible. Instead of asking the cadets and officer candidates to travel to Baltimore, Pulver said, he and the crew could pick them up or drop them off in Connecticut.
In the past four months in Baltimore, the foremast was overhauled and some smaller maintenance projects were completed to ensure the safety of the crew and trainees, for a cost of about $2 million. All three masts were overhauled in the past three years. The service-life extension will cost about $20 million to $30 million, Pulver said.
"It's a constant effort to keep the ship safe, but we've definitely got the focus of both the crew and the Coast Guard on that goal," he said.
After leaving Baltimore Saturday morning, Eagle returned home slowly, because of the snowstorm and to help new crew members get acclimated, Pulver said.
"We've been looking forward to coming home for a while. We get great work done in the Coast Guard Yard, but the home of Eagle is New London, our families are here so it means a great deal for us to come home," he said. "I would summarize with 'thrilled.'"