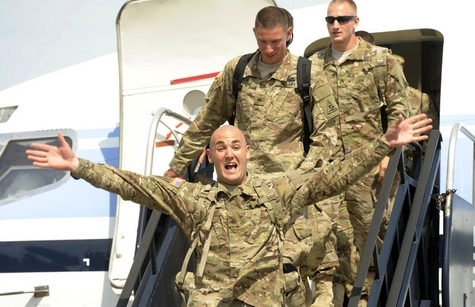 Sgt. Kenneth Ramey waves his arms as he emerges from the plane carrying members of the Connecticut National Guard's 143rd Military Police Company, based out of West Hartford, home Wednesday, June 5, 2013 to the Air National Guard base at Bradley Field in East Granby following a deployment to Afghanistan. Ramey's wife, Staff Sgt. Rachel Ramey, was also deployed with the unit and arrived shortly before her husband on another aircraft. The 143rd worked along Afghan Uniformed Police units while deployed.

The unit previously deployed to Iraq from 2003 to 2004. More than 450 Connecticut soldiers and airmen are currently mobilized and deployed in support of the operations in Afghanistan.