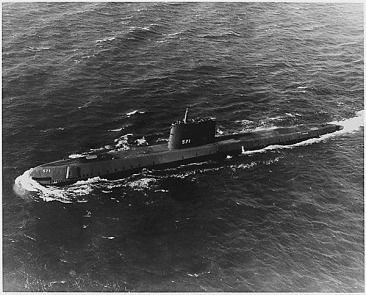 Nautilus at sea. Credit: U.S. Gov't
A condenser leak threatened the polar mission, but stops at auto supply stores in Seattle fixed the problem and enabled the Nautilus to be the first to cross the North Pole.
Given the enduring popularity of Jules Verne’s classic novel 20,000 Leagues Under The Sea, it should come as no surprise that no fewer than six vessels in the Navy have been named the Nautilus — two ships and four submarines.
But the last submarine named Nautilus (SSN-571) was a game-changer. Built during the Cold War in the 1950s, this version of the Nautilus was the first sub ever to be powered by a nuclear reactor. As such, its ability to stay submerged for extremely long periods of time was unprecedented. At 319 feet in length, the Nautilus was much larger than diesel-powered subs, and weighed more than 3,000 tons. It rewrote the submarine record book for durability and distance.
Built in Groton, CT, in 1951, the sub was christened there by First Lady Mamie Eisenhower on January 21, 1954. Its home port was the Naval Submarine Base in Groton as well, the home, too, for many of its crew.
By the time it was decommissioned in 1980, it had roamed the seas of the world for more than 25 years and had traveled an incredible 500,000 miles! Today, it is the centerpiece exhibit at the Submarine Force Library, Museum, and Gift Shop on 1 Crystal Lake Road in Groton. More than 250,000 visitors tour the Nautilus annually. The submarine was declared a National Historic Landmark in 1982.
Its most famous voyage happened 55 years ago this week. Having left New London on July 23, 1958, the Nautilus headed to Pearl Harbor. After a layover in Pearl, SSN-571 then headed north on a secret mission called “Operation Sunshine.”
As the sub headed north, a water leak developed in the engine room in one of the condensers and threatened the safety of the mission. Commander William Anderson had the Nautilus berth in Seattle while he devised a solution for the leaking condenser. His ingenious solution was to have his crew go out into the city of Seattle to purchase “Bar’s Leak” — the tried-and-true solution for fixing a car’s leaking radiator. (More than 100 million have been sold to date.)
He ordered the crew to don civilian clothes and to buy as much “Bar’s Leak” as they could find at service stations and automotive supply stores in Seattle. They returned with 140 bottles! Half of that supply was dumped into the system, and it worked! The leak was fixed. Next stop: the North Pole.
As the Nautilus approached the North Pole, it had to submerge to pass under the ice. While submerged and traveling at about 500 feet in depth, the 116 man crew became the first known human beings to say that they had literally been “on top of the world.”
They were the first mariners to say that they had reached 90 degrees North. As the submarine passed 90 degrees North, Commander Anderson uttered these famous words: “For the world, our country, and the Navy—the North Pole.” The sub was under the ice for 96 straight hours and covered 1,830 miles before surfacing off the northeast coast of Greenland. The Nautilus then headed to port in England briefly before returning to New London. The entire crew received a Presidential Unit Citation—the first one ever given to servicemen not at war.
The importance of the polar exploration in 1958 cannot be overestimated. It was a major morale booster for the country, as just one year before the Soviet Union had put the first ever satellite into space— the Sputnik. The Soviets did not have a nuclear submarine in their arsenal. We did. It was superb, and it was made in and stationed in Connecticut!