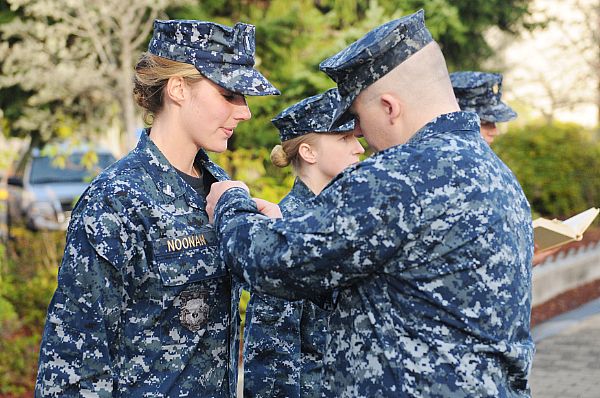 (U.S. Navy photo by Chief Mass Communication Specialist Ahron Arendes/Released)
BANGOR, Wash. (Dec. 5, 2012) Lt. j.g. Jennifer Noonan, assigned to the Blue crew
of the ballistic missile submarine USS Maine (SSBN 741), receives her submarine
warfare officer device from former shipmate Lt. Jason Brethauer during a ceremony
at Naval Base Kitsap-Bangor. Noonan is one of three Sailors to become the first
female unrestricted line officers to qualify in submarines.
BANGOR — The Navy awarded dolphins to the first three women to qualify in submarines Wednesday, including two from Naval Base Kitsap-Bangor.
Amber Cowan and Jennifer Noonan joined USS Maine blue crew members James Barclay and John Schaeffer in a pinning ceremony at Deterrent Park. All are junior-grade lieutenants. Another woman, from the USS Wyoming at Naval Submarine Base Kings Bay, Ga., also received dolphins.
The sailors reported to the boat about a year ago after 15 months of Nuclear Power School, prototype training and Submarine Officer Basic Course. Since then, they've been learning their jobs while being pulled to all parts of the boat to perform or observe things. They had to qualify as officer of the deck and engineering officer of the watch, perform damage-control and display leadership.
The Submarine Warfare Insignia, known as dolphins, is the pin worn above the breast pocket to show that the sailor is qualified for submarines.
"We weren't really submariners until today," said Noonan, a reactor control assistant. "We were on the boat, but not supporting the boat."
Cowan, a main propulsion assistant from Colorado and the University of Washington, said she now feels like part of the crew.
"I see it as that point where I have demonstrated the knowledge and the instinct to perform safely and smartly in all areas of the ship and its missions," she said. "… This day is really a mark of acceptance and confidence the crew has in me."
The four sailors, lined up on the hull of former submarine USS Woodrow Wilson, were pinned by a person of their choice while the boat's executive officer, Lt. Cmdr. Bill Johansson, read passages from "Submarine Operations in World War II." Cowan's husband, Naval Flight Officer Lt. Adam Cowan, traveled from Virginia to pin her, returning the favor of her attaching his wings in 2009.
Each sailor spoke briefly, thanking the assembled crew for helping them qualify. Barclay had already earned silver dolphins as an enlisted submariner.
"I'm going to wear these gold dolphins with great pride," he said. "Though I won't have it on my uniform, I'll always have the silver dolphins to remind me where I came from."
Everybody fell into a receiving line and shook the four sailors' hands.
Noonan, from the Boston area and Cornell ROTC, said becoming a submariner was difficult, but not because she's a woman.
"There's really no reason women can't do it, so I don't feel like a role model," said Noonan, whose father came from Massachusetts for the event. "I don't feel like we broke down any barriers."
The four newly qualified submariners all have completed strategic deterrent patrols with the USS Maine, a ballistic-missile submarine.
At Bangor, there are three women on each of the two crews of the Maine and the cruise missile-carrying USS Ohio. Two on each crew are on their first Navy assignments and a more experienced supply officer serves as their mentor. Three of the four supply officers have qualified in submarines, but they didn't have to go through nuclear training. Lt. Britta Chistianson of Ohio's gold crew was the first, earning her supply dolphins in June.
The next group of female submariners will begin arriving at boats in January, assigned to the ballistic-missile USS Louisiana at Bangor and the guided-missile USS Florida at Kings Bay.
Each crew comprises 15 officers and about 140 enlisted men.